Skip to What you Can Do

To promote and build support for the Commonwealth Postal Savings Bank (CPSB), we have drafted a resolution which can be adopted by local councils, chambers of commerce, union branches, political party branches, and indeed any community organisation.

On 27 July, councillors at the Narrabri Shire Council in NSW unanimously passed a resolution supporting the CPSB, calling on the Parliament to pass the legislation and on 28 July, the Banana Shire Council in QLD carried a similar resolution with no opposition. We have also been informed that on 3 August, the Licensed Post Office Group has endorsed the Commonwealth Postal Savings Bank Bill. As seen from these early results, activists are taking this resolution and motivating its adoption.

The Citizens Party urges all Australians who support a post office people’s bank to take to their local council, chamber of commerce, union branches, political party branches, indeed any community organisation, and ask them to endorse the Commonwealth Postal Savings Bank Bill:

“As Councillors would be aware Wee Waa has recently lost both banks and their services.

This has disadvantaged many people and businesses and charity groups in town. Businesses have had to allow an employee to travel to Narrabri to do business banking. This involves 1-2 hours of lost time.

Businesses need to bank daily takings and or access cash to service customers in their shopping. Not everyone uses EFTPOS cards.

Charities do not have local access for cash for functions and these functions run on cash, ie: raffles, street stalls, Christmas carnival etc. A Commonwealth Postal Savings Bank would ensure these services that are so important to the smooth functioning of a community.

The present arrangement between the National Australia Bank and Commonwealth Banks can change at the banks’ whim. Already charges for transactions have increased to $4.50.

The situation in Wee Waa is exacerbated by the removal of the town’s ATM. EFTPOS is available for limited cash at IGA and the Bowling Club if you are a member. When the internet went down last week for 3 days people could not access their money and businesses could not service cards or cash outs.

A Commonwealth Postal Savings Bank (CPSB) would permanently secure the financial viability of Australia Post and the LPOs, based on a legislated agreement with Australia Post that guarantees the LPOs share the revenue—their income will not be at the mercy of the private banks deciding whether or not to renew their Bank@Post deals.

It would guarantee financial services for all Australians. The private banks have abandoned small towns in regional Australia and low-income suburbs, but they all have post offices, through which they will be able to bank with CPSB.

It would guarantee bank deposits. The CPSB will be a public bank, owned by the government, which will guarantee all deposits, so Australians who bank at the postal bank will know they won’t lose their savings in a financial crisis or deposit “bail in”.

There would be no “de-banking”. As a public bank the CPSB will not be allowed to discriminate by de-banking lawful businesses.

It would support cash payments. The private banks are trying to do away with cash, which would be a disaster. The CPSB would allow people to always access cash.”

The Executive Management of Narrabri Council added the comment: “It should be noted that the above motion is a template motion drafted by the Australian Citizens Party.”

In a 29 July letter to the local MP, Cr Neville Ferrier, Mayor of Banana Shire Council advised that Council passed a resolution (right) in support of the Commonwealth Postal Savings Bank proposal at its general meeting on 28 July 2021.

Council’s actions got some local media attention in the Rockhampton, The Morning Bulletin with an article, CQ Council endorses idea for national bank, by Lachlan Berlin on 5 August 2021.

The Senate’s Australia Post inquiry report, tabled in Parliament on 15 June, was the culmination of the amazing campaign to support Christine Holgate and the thousands of Licensed Post Offices (LPOs) she saved with her 2018 banking deal. That campaign brought home the need for a permanent solution to secure the long-term viability of LPOs and guarantee banking services for all Australians, which is a post office “people’s bank”. It’s time to expand the campaign to unite Australian communities in support of the Commonwealth Postal Savings Bank Bill 2021, which the Citizens Party has drafted in cooperation with other parties to be introduced into Parliament in the near future.

A public postal bank would have many benefits, including breaking the monopoly of the Big Four banks over Australia’s financial system. For that reason, expect the major banks to try very hard to stop it. The banks’ opposition can be overcome, however, by building a groundswell of grassroots support to force Parliament to pass the bill. The good news is that there is already broad support across all parties for a postal bank, which a grassroots campaign can unite and turn into action!

Postal banks are very common—and popular!—around the world, and there is currently a parallel campaign for a postal bank in the United States, which is being supported by a grassroots movement called A Grand Alliance to Save Our Public Postal Service (watch this short explanatory video by actor Danny Glover) involving more than 90 national organisations and a myriad of local community organisations. We have the same potential in Australia to unite all communities and organisations that use and value local post offices, and the licensees who run them, to support the postal bank solution.

Other reasons for an postal savings bank:

A postal people’s bank is clearly both in Australia’s national interest, and is the long-term solution for Australia Post. For that reason, the Citizens Party has drafted legislation, called the Commonwealth Postal Savings Bank Bill, for introduction into Parliament in the near future, as part of a national banking system that includes a national infrastructure bank. But for this solution to work, the corruption exposed by the appalling treatment of Christine Holgate and the Senate inquiry must be cleaned out. The government and the Opposition won’t do it—it’s up to the citizens of Australia.

Ask local representatives and organisations to endorse the Commonwealth Postal Savings Bank Bill by passing a motion/resolution similar to the one above. Examples of organisations:

DOWNLOAD this flyer for print or email: Unite Australia in support of the Commonwealth Postal Savings Bank

2. Get these flyers out into your community. Click on the image to Download PDF for printing or attaching to email. 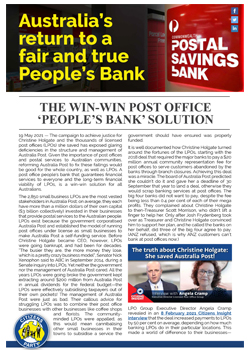 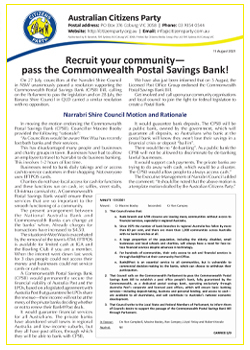 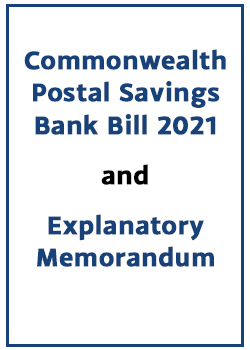 Some places you can take one or all of them or email them to:

As a result of the pressure brought to bear on Australia's elected officials by concerned and active citizens, much of which has been generated by the Citizens Party's campaign, we have a fantastic breakthrough: 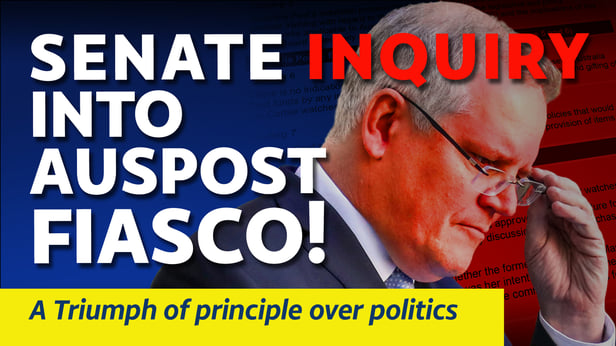 the Senate has conducted an inquiry into Australia Post and the circumstances surrounding the ouster of Christine Holgate! 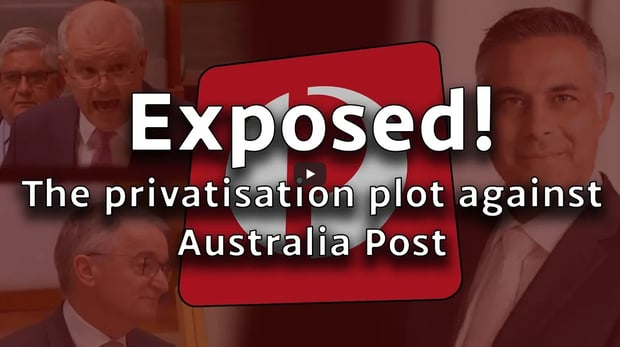 The Senate Inquiry has definitely opened a can of worms for the government with Christine Holgate’s explosive submission and testimony to the Senate’s Australia Post inquiry confirming the Citizens Party’s original suspicion—the attack that drove her out of Australia Post saved the Big Four banks from her plans to establish a public postal bank. The submission confirms that the government commissioned the secret Boston Consulting Group report it has been hiding from Parliament not just to prepare Australia Post for full or partial privatisation, but to block any moves to turn Australia Post into its own bank. 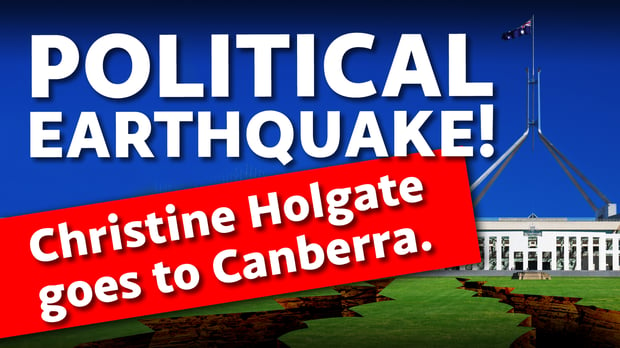 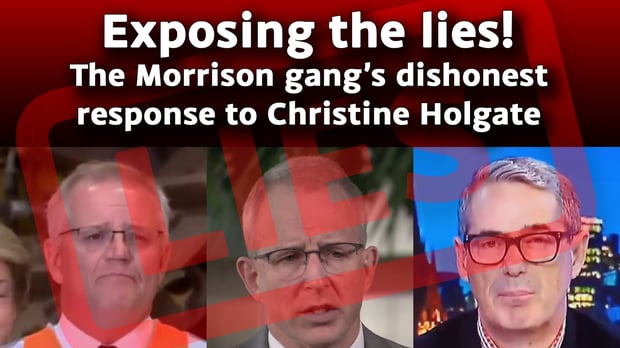 As the political fallout continues it is clear that Scott Morrison doesn’t want to talk about the big issues Christine Holgate exposed in her powerful Senate testimony about his privatisation agenda for Australia Post, so he and his gang are trying to revive the original outrage over spending “taxpayers’ money” on Cartier watches.

However, they can’t stick to their story without lying, as we show in this short video Exposing the lies! The Morrison gang’s dishonest response to Christine Holgate

As a testament to the success of our campaign to save Australia Post from privatisation and to establish a postal savings bank, during the course of the public hearings, the Citizens Party has been mentioned twice by the two most disingenuous senators on the committee, committed to protecting their political party's positions over investigating the truth.

See Below for the latest Media Releases and other content updates for this campaign.