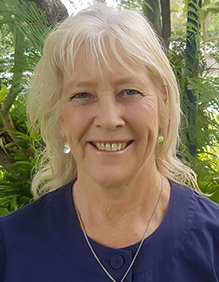 I am 63 years old, married 35 years with four children and four grandchildren and I live in Brisbane.

I first heard of the Citizens Party in 1997 (then called the Citizens Electoral Council) and joined in 1999 after two years of investigating their reports and questioning everything; eventually flying down to the Melbourne headquarters with my husband and meeting the ACP firsthand. Although I had (and still have) a healthy contempt for corrupt politicians, I’d never thought of standing up for anything other than family values and local issues.

“Evil thrives while good people do nothing”, and I was driven by the Citizens Party’s expression of statecraft in all of their literature, which sets them apart from all other parties! We are Australians, but also world citizens, where “all men are created equal” and we recognise that civilisation's progress and advancement in science and culture is our responsibility. So, whilst we elect politicians to govern, it's our duty to hold them to account, or get the government we deserve.

Baby boomers like me have lived through the slow train-wreck of privatisation, deregulation, economic rationalism and free trade (a.k.a. globalisation) since the 1980s, and the result is an overblown, unproductive service industry that cannot produce anything nor support a growing population. Qld Health deteriorated under various governments for decades, as did farming and manufacturing, due to these "comparative advantage" policies. All the while the so-called mining sector (quarry) and stock market (gambling) was "booming", yet in the real world, drugs and suicide became a norm. It’s time protectionist policies returned in the national interest!

Perhaps if we hadn't taken our four kids out of school and driven our bus around Australia, then we might still be in a fool's paradise. But we returned determined to take up the fight with the Citizens Party to revive the nation's full potential of becoming a proud and advanced society of science-driven productivity in farming, manufacturing and nation-building infrastructure, with a government-owned national bank directing credit to reindustrialise Australia and support a growing population with an increased standard of living.

I've now worked full-time as the Qld State Secretary for 21 years and by studying history, discovered that unlike animals, human beings evolve culturally, and that education, nurturing and developing creativity and passing on knowledge, is how renaissances are made. Raised an atheist, it was some breakthrough to discover the power that these Christian principles had in suppressing and defeating the evil of financial usury and Oligarchism to overcome dark ages throughout history. Whilst mankind has witnessed and created such great renaissances for humanity in the past, it is now up to us to do so again, in our time.

Our growing band of ACP activists Australia-wide are organising their friends, their councils, their MPs, and strangers on the street, to support our policies and legislation for reindustrialising Australia. We never dumb it down for votes because "dummies” won't develop Australia!

I ask you to take the intellectual challenge and develop yourself into the person you want to have lead Australia. Who else can you trust? And now that the world has come to this precipice in our lifetimes, where the banks want to control the economic disintegration worldwide, and governments have thrown health and general welfare to the wolves, it is obvious we cannot continue with the genocidal free market and we cannot tolerate the consultants and protectors who put the wealthy and powerful ahead of the ordinary people! We have to change the system and we must change ourselves in the process.

The Citizens Party is more than just a political party—we are dedicated to the common good. I ask for your support in my campaign.