5 Apr.—British Empire “philosopher” Lord Bertrand Russell, in his 1952 book The Impact of Science on Society, posited that the mark of a truly successful state propaganda campaign would be its ability to instil in an entire population “an unshakeable conviction that snow is black”. If Russell were a 21st century Australian, he would fit right in on the editorial board of any of the major “news” outlets, which have managed to convince a large portion of the Australian public that China, a country which is not and has never been hostile to Australia, is in fact our deadly enemy. The intensity of the propaganda barrage appears to have become too much even for Australia’s national security establishment, leading to a bizarre situation where it is now leaking the truth to one news outlet to counteract the lies it previously spread via another, as Canberra gets cold feet in its role of front-man for the Trump Administration’s push for a so-called independent inquiry into the origins of the COVID-19 pandemic (p. 10).

Inversions of reality abound, but perhaps the most egregious is the mischaracterisation of the 29 April press conference in Melbourne at which Health Minister Greg Hunt and mining magnate Andrew Forrest announced that Forrest’s Minderoo Foundation, on the government’s behalf, had acquired from China 10 million test kits and associated equipment essential to the necessary expansion of Australia’s COVID-19 testing program. Since the Chinese government had been instrumental in arranging the purchase, Forrest invited China’s Consul-General in Melbourne Mr Zhou Long to say a few words. Cue howls of outrage from the press, and several big-noting government MPs, that Forrest had “ambushed” Hunt and allowed Zhou to “gatecrash” and “hijack” the press conference to push China’s geopolitical agenda.

Presumably afraid of undermining the government’s own geopolitical agenda, Hunt played along—but failed to keep his story straight, with the Australian Financial Review reporting 1 May that he had been led to believe Zhou was an employee of Forrest’s, whereas the same day’s Australian said Hunt had thought him a representative of Beijing Genomics Institute (BGI), the company that supplied the test kits. Forrest however has refused to be cowed, writing in a 1 May statement that Hunt had known in advance that he wanted a Chinese government representative to be at the event. “When given the choice on the day”, he wrote, “the Minister agreed the Consul-General could speak. … It was a gracious gesture of appreciation and friendship between our two nations, and to recognise and thank [BGI] for assisting Australia’s battle to combat the greatest threat to our country in decades.” And the only agenda Zhou pushed in his brief remarks was that of international cooperation: “Views have been expressed that the COVID-19 pandemic is the biggest crisis faced by mankind since World War II”, he said. “If that is the case, we have no choice but to work together … to make the world a safer, more harmonious and a better world.”

A close second in the “snow is black” stakes is AFR’s twisting of Chinese Ambassador Cheng Jingye’s words during a 26 April interview with its political correspondent Andrew Tillett. Tillett’s initial report was bad enough, using every rhetorical trick in the book to imply that Cheng had threatened a Beijing-engineered “Chinese consumer boycott of students and tourists visiting Australia, as well as sales of popular agricultural exports like beef and wine” unless Canberra dropped its push for an inquiry. Subsequent articles, such as one on 28 April in which Foreign Minister Marise Payne is quoted declaring that “Australia has made a principled call for an independent review of the COVID-19 outbreak … [and we] reject any suggestion that economic coercion is an appropriate response to a call for such an assessment”, simply presented Cheng’s “threat” as fact. The transcript of the interview posted on the Chinese embassy’s website, though, shows that Tillett engineered the supposed threat by demanding four times that Cheng elaborate the possible “economic consequences”, before the ambassador quite reasonably suggested that the Chinese people might eventually ask themselves, “Why we should go to such a country while it’s not so friendly to China?”; that the parents of would-be international students might “think [about] whether this place, which they find is not so friendly, even hostile, is the best place to send their kids to. … And also, maybe the ordinary people will think why they should drink Australian wine or eat Australian beef.” The word “boycott” was introduced into the discussion by Tillett himself—to which Cheng replied: “I don’t know. I hope not.”

Five Eyes on the blink? 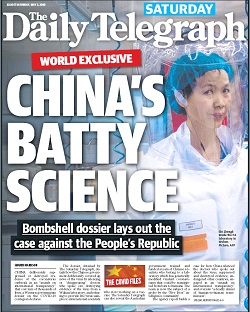 Lastly, an exclusive in the 2 May Saturday Telegraph by political editor Sharri Markson “revealed” that China “deliberately suppressed or destroyed evidence of the coronavirus outbreak in an ‘assault on international transparency’ that cost tens of thousands of lives, according to a dossier prepared by concerned Western governments”. These governments are not named, but are inferred to be the members of the Five Eyes spying alliance—Australia, Canada, New Zealand, the UK and the USA. Markson also claimed that the Five Eyes were investigating two Chinese scientists at the Wuhan Institute of Virology, alleged by the Trump Administration to be the source of the outbreak, who had previously worked in Australia. On 4 May, however, the Sydney Morning Herald reported in its own exclusive: “Senior members of the Australian intelligence community … [say] a research document shared in political circles under the Five Eyes intelligence arrangement was mostly based on news reports and contained no material from intelligence gathering.” (Emphasis added.) Moreover, “Multiple senior intelligence sources who spoke to [SMH] in recent days have confirmed that Australia has still not been provided with any evidence that strongly suggests the Wuhan Institute of Virology was the source of the outbreak.” Oops.

As retired Australian diplomat Tony Kevin had already noted in a 3 May article for Consortium News, Canberra is now “trying quietly to back away from the position in which it put itself with China” by backing Trump et al.’s ill-fated push for an inquiry, having belatedly realised that it was dead in the water from the beginning and serves none of Australia’s interests anyway. As Kevin puts it: “China is where our bread is buttered, while at the same time the USA is recognised by realist Australian strategic thinkers as a declining superpower.” Sooner or later, Australia will have to stop trying to ride two horses at once.