At the 2022 Federal Election, Citizens Party candidates are fighting for these policies to protect Australians from the next economic crash and build a future for all. This Fighting Platform is not intended to be all-encompassing, but expresses the priority issues the Citizens Party has identified as urgent to be addressed at this point in time.

Break the oligopoly of the Big Four banks, which are arrogantly (mindlessly) closing branches, debanking lawful businesses, and reducing access to and availability of cash. We MUST establish the Commonwealth Postal Savings Bank (CPSB). Using post offices as branches (and thus ensuring the viability of Australia Post and its licensed post offices), the CPSB will guarantee full, low-cost banking services, deposit security, and access to cash for all Australian individuals, businesses, and communities.

Establish a national infrastructure bank from which local, state, and federal governments can borrow for infrastructure projects that build Australia and create jobs, ending Australia’s reliance on foreign borrowing, “asset-recycling” privatisation, and expensive public-private partnerships (PPPs). The infrastructure bank will enable Australia to again embark on transformative, nation-building water, power and transportation infrastructure projects, in the spirit of the Snowy Mountains Scheme, which will develop and support industries and economic opportunities, and spark a population boom, in regional Australia. Priority projects include the Bradfield water diversion scheme in North Queensland, the Iron Boomerang railway between Queensland and Western Australia, and high-speed rail between the state capitals. Australians will be able to invest their superannuation and retirement savings in the capital of the infrastructure and development banks, which investments will be fully guaranteed by the government.

Establish a national development bank to provide long-term, low-interest credit on flexible terms for Australian manufacturing and agricultural industries. To revive manufacturing, the development bank will back local innovations that too often are lost offshore, so they are developed and manufactured domestically. For agriculture, it will support family farms through the ups and downs of seasons and markets and with their investment needs. The development bank will be a repository of financial, industrial, and trade expertise and advice for the government and industries. Expanding manufacturing and agricultural industries will require a concerted upgrade of skills training and technical education services.

Mobilise a dramatic increase in clinical staff (paramedics, nurses and doctors), equipment and technology, and beds and hospitals, to address the crisis besetting every aspect of the public healthcare system—ambulance services, public hospitals, regional health care, mental health, disability services, and aged care. Due to decades of ideologically driven under-resourcing, profiteering, and outsourcing to management consultants, Australia’s public healthcare system was overwhelmed even before the COVID-19 pandemic, but instead of recognising the pandemic as a wake-up call to permanently expand healthcare resources, to both meet the public health challenge and establish a much higher standard of healthcare delivery for all Australians into the future, both Federal and State governments have overseen woefully inadequate responses, defaulting to short-term, band-aid measures and resorting to extreme restrictions and mandates as a substitute for properly resourcing public health care.

Immediately amend the Banking Act 1959 to remove the 2018 “conversion and write-off” provision applying to “any other instruments” that could be used to seize the savings deposits of Australians to prop up failing banks. While the Australian government denies this power could be used to bail in savings deposits, it is committed to implementing the bail-in policy of the Financial Stability Board (FSB) at the Bank for International Settlements (BIS) in Basel, Switzerland, which explicitly does include deposits; the proposed amendment would remove all doubt.

Enact the Citizens Party’s Banking System Reform (Separation of Banks) Bill, to mandate a full separation of banks with deposits from speculative investment banks and all other financial services. The bill is modelled on the USA’s successful Glass-Steagall Act 1933, which protected Americans from financial crises for 66 years, until its ill-fated repeal in 1999 led to the explosion of speculation that caused the 2008 global financial crisis. A Glass-Steagall bank separation will give Australians confidence in the security of the banking system, divert the banks away from financial speculation and back to serving the real economy, and end the conflicts of interests resulting from so-called “vertical integration” of banking with insurance, stock broking, funds management, and superannuation. The Separation of Banks Bill will also make the bank regulator, the Australian Prudential Regulation Authority (APRA), accountable to Parliament rather than the Bank for International Settlements.

End Australia’s shameful reputation as a paradise for white collar criminals by overhauling the Australian Securities and Investments Commission (ASIC) into an aggressive law-enforcement agency feared by the banks. This requires replacing ASIC’s hands-off caveat emptor philosophy—“let the buyer beware”—which allowed financial misconduct to flourish, with an emphasis on “seller beware”, enforced by criminal prosecutions of financial predators instead of token fines paid by bank shareholders.

Compel the banks and other financial institutions to fully compensate all of their financial victims, including the tens of thousands of cases from the decades before the 2018 banking royal commission. These victims deserve justice, not to have their cases swept under the carpet. Given that many victims have languished in ruin for years, or like the elderly victims of Sterling First are extremely vulnerable, the government should expedite justice by paying the compensation in advance and recouping the funds from the financial institutions through levies.

End the dangerous “drums of war” rhetoric pushing Australia to join the USA and UK in confronting China, and prioritise diplomacy to resolve tensions respectfully, starting with reiterating the One China policy that Australia has held since 1972. Renounce any more involvement in disastrous regime-change wars, and reform the war powers to replace the prime minister’s power to unilaterally declare war with a vote by Parliament.

End Australia’s foreign policy subservience to the USA and UK by asserting an independent foreign policy in Australia’s national interest. A truly independent Australia would oppose disastrous regime-change wars and the dangerous Anglo-American strategic escalation against China and Russia; withdraw from the Five Eyes intelligence-sharing partnership and demand the UK and USA release Australian journalist Julian Assange; and prioritise developing good relations and economic cooperation with the nations in our region, including by joining our regional neighbours and most of the rest of the world in participating in the Belt and Road Initiative to raise global living standards through infrastructure investments (which the Morrison government initially enthusiastically welcomed before siding with the USA’s attacks on BRI as a threat).

Finally end Australia’s institutional mistreatment of asylum seekers and refugees, by immediately releasing those in long-term, indefinite detention. Australia should accept New Zealand’s offer to assist in settling refugees; release the 33 young men who have languished in Melbourne’s Park Hotel for the last four out of their nine years of indefinite detention, simply for arriving by boat; and allow the Murugappan family to return to their home in Biloela.

Protect homeowners and farmers from mass evictions in a housing market crash with a foreclosure moratorium that keeps families in their homes while the government directs a reorganisation of failing banks and write-downs of mortgage debt. Through their policies that encouraged the banks to concentrate their lending on mortgages at the expense of the rest of the economy, the government, Reserve Bank, and APRA inflated house prices into a speculative bubble, which they have continued to prop up, making housing unaffordable for young families. It is inevitable that this bubble will crash, but this will make housing affordable again, and the foreclosure moratorium will enable the government to manage the crash in an orderly way to ensure nobody loses their family home or farm, and avert a banking meltdown.

Amend the Environment Protection and Biodiversity Conservation Act 1999 to repeal its prohibition on nuclear power generation, by which Australia is the only country in the world that denies itself the use of not only one of the major energy technologies, but one which the EU has classified as “green energy” because it is emissions-free. The energy-density of nuclear fuel makes nuclear power the most efficient and reliable energy source in the world, and in recent decades great progress has been achieved in making nuclear reactors exceedingly safe, and in reprocessing nuclear waste. Australia should capitalise on having one third of the world’s known uranium reserves and plentiful thorium reserves to develop next-generation nuclear energy technologies that are safe, clean, affordable, and reliable.

Tax $1 in every $1,000 of turnover in stocks, bonds, currency exchange transactions, and both exchange-traded and over-the-counter derivatives. This would be a tiny charge on retirees selling long-term share investments, but a heavy burden on high-frequency traders and derivatives gamblers.

For more information email the citizens party at info@citizensparty.org.au or call 1800 636 432. 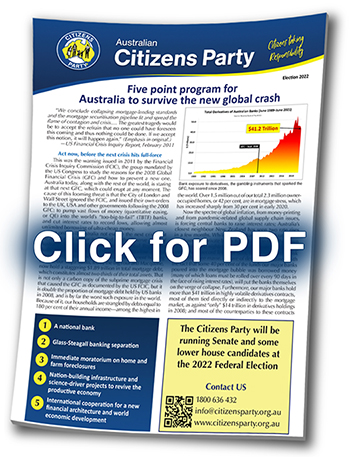 Australia has record foreign and household debt; we are losing our productive industries, such as car and steel manufacturing; real unemployment is at least nearly 10 per cent; and our banking system faces wipe out when the property bubble inevitably crashes.

For 32 years the Citizens Party/CEC has fought as an independent political party for the principles of the common good and national sovereignty, in economic and foreign policy, which are needed today.

We have fought to free Australia from the Crown-City of London-Wall Street apparatus of banks and multinational corporations, which seized control of our economy under the policies of deregulation and privatisation that the Hawke-Keating ALP started, and the Liberals continued.

We have fought for economic development using a national bank to invest in large-scale water, power and transport infrastructure projects, in order to expand our agriculture and manufacturing industries and create hundreds of thousands of productive jobs.

We have fought for a just world economic order based on respect for national sovereignty, and the principle of peace through economic development—that nations collaborating on mutually beneficial economic development projects provides the basis for lasting peace.

Read through the Citizens Party's policies that are based on these principles. 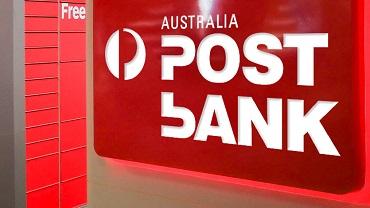 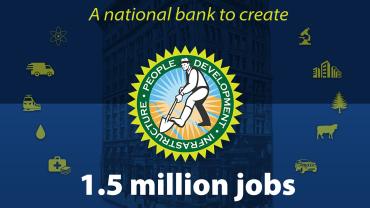 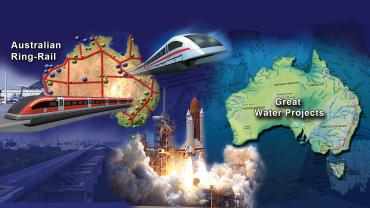