End the ‘bail-in’ nightmare! MOBILISE your Senators TODAY;
watch and share ‘Your deposits in the bank are not safe’

The Senate will vote on Senator Malcolm Roberts’ Banking Amendment (Deposits) Bill 2020 on 30 November, which would end the threat Australian bank deposits could be “bailed in” once and for all.

The government wants you to take them at their word that deposits won’t be bailed in, but that’s not good enough—the assurance is worthless unless it is written into the law. Therefore, it’s very important that you call all the Senators from your state, your local federal MP, and Labor’s Shadow Assistant Treasurer Stephen Jones to demand they vote for the Banking Amendment (Deposits) Bill 2020.

Don’t let them fob you off by saying the bill is unnecessary! Tell them that former John Howard advisor and Australian Banking Association director Nick Hossack told the Senate inquiry that deposits can be bailed in. Also, former Liberal Party leader Dr John Hewson, himself a banker, said: “Parliament should endorse the Banking Amendment (Deposits) Bill to explicitly rule out the possibility of ‘bail in’ where authorities would allow banks to convert your deposits to shares in a banking crisis—should be a ‘no brainer’ for any government”.

Ask ALP Shadow Assistant Treasurer Stephen Jones: “Why would Labor protect the government on bail-in, instead of making the law explicit that deposits can never be bailed in?” Canberra: (02) 6277 4661 Electorate: (02) 4297 2285

Robert Barwick discusses the latest in The Fight Against Deposit Bail-In with Martin North & One Nation Senator Malcolm Roberts.

The deadline for submissions to the Senate Economics Legislation Committee’s inquiry into the Banking Amendment (Deposits) Bill 2020 has passed, and a big thank you to everyone who made a submission. Keep calling and emailing Members of Parliament and Senators to demand they support the bill to amend the bail-in law so deposits are explicitly protected.

Here are the contact details for the members of the committee: 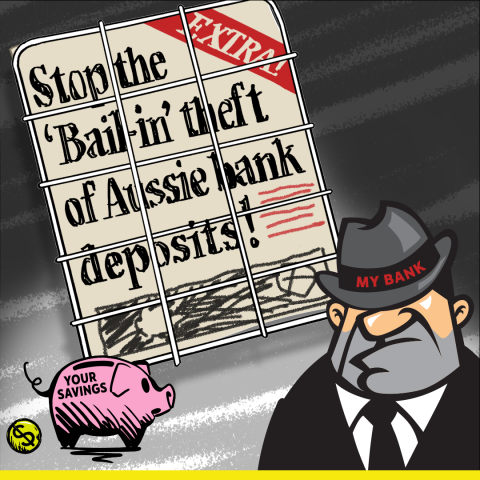 Essentially, concerned Australians should tell the government, which claims deposits won’t be bailed in, to “put it in writing”. And not in letters to constituents as they always do, which is meaningless, but in legislation, where it counts. Here are the facts which show why the government’s assurance that deposits won’t be bailed in cannot be believed unless they put it in writing in legislation by passing Senator Roberts’ bill:

It is not good enough for the government to say its 2018 law won’t apply to deposits—the legislation must say it can’t. That’s what the Banking Amendment (Deposits) Bill 2020 will do, but it will not change the rest of the law in any way. If the government is genuine in saying it won’t bail in deposits, it will support this bill to put it in writing and thereby clarify the law; if it does not, the question is why would they prefer to keep it in doubt unless they really do intend to bail in deposits?

26 Aug 2020
The Morrison government had an opportunity to settle the growing community concern over the security of bank deposits from a “bail-in”. It has failed.
Read more

13 Aug 2020
The Senator who gave Australia “bail-in” is now leading the desperate effort in the Morrison government to block the bill that would absolutely ensure deposits can’t be bailed in.
Read more

5 Aug 2020
What should have been a simple task of producing an inquiry report asserting the government’s position that Senator Malcolm Roberts’ bail-in amendment bill is unnecessary is suddenly far more complicated.
Read more

Senate committee must not gate-keep the bail-in inquiry—demand public hearings!

Politicians lie about bail-in! Demand they pass the amendment

26 Jun 2020
Every Australian concerned about bail-in should make a submission to the Senate Economics Legislation Committee by 10 July, demanding Parliament pass the Banking Amendm
Read more

Don’t believe Morrison won’t ‘bail in’ deposits unless he puts it in writing!

24 Jun 2020
Make a submission to the Senate’s new bail-in inquiry and demand Parliament pass the amendment to guarantee our savings in bank deposits can’t be confiscated through a bail-in.
Read more
[ Back to top ]