The Snowy Mountains Scheme is a white elephant. That’s all there is to it. Never mind that it is one of the engineering wonders of the world, providing water for irrigation and clean hydroelectricity for power. Or that it helped to transform the arid areas of the Murray-Darling Basin, which receives just 6 per cent of Australia’s surface water runoff, into Australia’s most productive food bowl. Or that its 25-year construction, completed on time and on budget, drove a ten-fold increase in Australia’s nominal gross domestic product (GDP) between 1949 and 1974. Never mind all that, because it’s a white elephant by the rules which govern Australia’s infrastructure development today, and that’s what matters. If the smart people running Australia today had been in charge in 1949, the Snowy would never have been built—and Australia would have been better off … wouldn’t it?

The above is not satire; it’s the shocking truth evident in the Commonwealth Scientific and Industrial Research Organisation’s (CSIRO) recent assessment of the Bradfield water diversion scheme in North Queensland. The CSIRO’s “desktop analysis … found that while technically feasible, the scheme is not commercially viable”. However, this conclusion is based on an economic premise adopted by Australian governments in the 1990s and early 2000s which, if it had been applied historically, would have stopped most of the infrastructure projects that built Australia, including the Snowy Mountains Scheme. 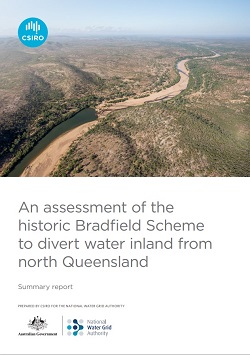 The 17 September Sydney Morning Herald headline blared: “Water scheme beloved by the Nationals would pump $20 billion down the drain”. Journalist Mike Foley reported: “Engineer John Bradfield’s grand plan to irrigate the dry, dusty interior of the continent has captured the national imagination and spawned countless campaigns to fund it. Now, 80 years after he proposed it, CSIRO has counted the project’s cost and even the most optimistic assumptions show taxpayers footing a $20 billion bill, or more.”

Calling the CSIRO’s report “grim reading for advocates of Bradfield’s vision”, Foley compared the project to nuclear power—“popular among some in the public but economically doomed due to its expense and environmental risks”.

According to CSIRO deputy director land and water Chris Chilcott, the agency assessed multiple versions of the scheme, trying to find a scenario under which the scheme is viable. “We came to a conclusion that, as a grand scheme, it’s difficult, no matter what you do, to make it work”, he said to SMH, claiming, “And we’ve tried to maximise its opportunity to work.”

The essence of the CSIRO’s analysis is that the amount of water that could be diverted is only half what Bradfield estimated, and the cost of the infrastructure would be greater than the net revenue from the crops the water would be used to grow.

Foley reported: “CSIRO said its modern variation would cost at least $12 billion ‘under an optimistic set of assumptions’ across a 100-year project lifespan and farmers would have to pay $970 a megalitre for their irrigation entitlements to cover the cost of supplying the water.

“Last year irrigators in Victoria and NSW paid about $55 a megalitre on average, and $100 in South Australia.

“CSIRO estimated that irrigators relying on the Bradfield scheme would be able to afford $80 a megalitre at most, which meant the ‘cashflow of the scheme remained almost entirely negative’ in any scenario it modelled.”

So is that the final word? Given it is the CSIRO, it is certainly being reported that way, but before Australians accept its conclusion, it’s important to question the assumptions underlying the conclusion.

(It’s also worth questioning why the CSIRO, a scientific body, is doing an economic assessment, but we’ll leave that for now.)

The broad assumption that led the CSIRO to its conclusion is found in this paragraph of its report:

“In 1994, the Council of Australian Governments released a communiqué setting out a framework for water reform in Australia. These directions were reinforced in 2004 when the Intergovernmental Agreement on a National Water Initiative (NWI) was released. One of the central tenets of the reforms was a ‘user pays’ principle, where the cost of providing and supplying water was to be recovered by the sale of water. Two other overarching principles of the NWI are: (i) provision of water for environmental flows and other public benefits, and (ii) provision of water to meet the needs of Indigenous people.” (Emphasis added.)

Essentially, since the 1990s and early 2000s, water projects in Australia must be assessed on a “user pays” principle such that the industries which use the water must pay for the entire cost of the project. 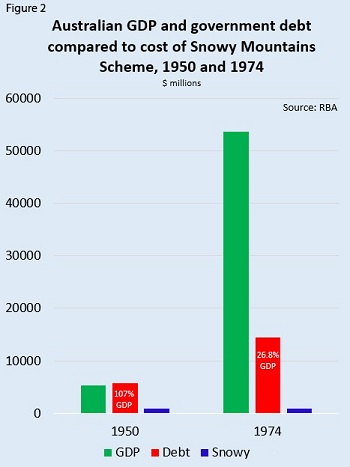 This is a stark example of the neoliberal ideology that has been a brake on economic development in Australia ever since it was adopted starting in the 1980s. The visionary governments that developed Australia through great projects like the Snowy Mountains Scheme, Tasmania’s Hydro, and the Ord River Scheme did not think about infrastructure in this way. They understood grand projects are transformative, shifting the productive capacity of the nation to a higher platform that revolutionises the entire economy. Water projects are multidimensional, delivering benefits including water for industry and drought mitigation, flood control, national food security, and the potential for new industries. To assess a project on a narrow user-pays basis ignores the other, less quantifiable, actual and potential benefits. Those previous visionary governments would invest public funds to build the projects, and recoup the costs through modest user fees as well as the extra tax revenue from increased economic activity.

Take the Snowy Mountains Scheme. The neoliberals running Australia, including the CSIRO, would indeed have called it a white elephant. By modern neoliberal standards, it was financially reckless. When Australia embarked on the project in 1949, Commonwealth government debt due to the overhang of WWII was still 107 per cent of GDP, compared to the present ratio of Commonwealth debt-to-GDP of 45 per cent. The estimated cost of the project in 1949 was $800 million, equivalent to 15 per cent of GDP. Today, a similar project would cost $300 billion—far, far greater than the $20 billion price tag of the Bradfield Scheme! No modern Australian government would dare propose such a project. Yet Australia would have been a poorer country without it. Much of the Murray-Darling basin food bowl would still be arid and fallow, and Australia would not have had the benefit of the electricity it provides (although, considering Snowy Hydro powers Canberra, some Australians might think that’s a good thing). Counter-intuitively to most modern economists, by the time the Snowy was finished in 1974, Commonwealth government debt had reduced from 107 per cent of GDP to below 27 per cent (Fig. 2), despite successive governments having run only one budget surplus in 25 years (Fig. 1). This was because the investment in the Snowy had helped to drive a massive expansion of the national economy. 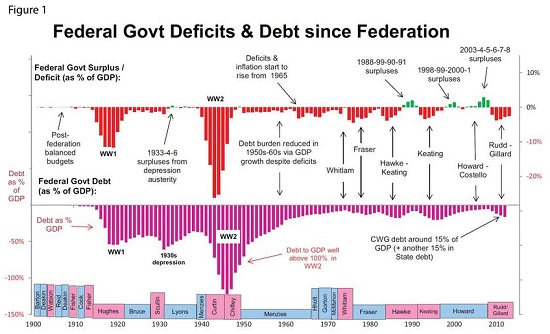 There are too many examples of modern development ideas being blocked by the neoliberal ideology that would regard the Snowy and Bradfield schemes as white elephants. One that the AAS recently reported on was the 2015 South Australia Royal Commission on Nuclear Power, which found that while nuclear technology was beneficial, it was not economically viable. As the AAS discovered, that finding assumed that the capital cost of the investment required would have to be borrowed at a commercial rate of 10 per cent interest, even though the government bond rate at the time was around 2 per cent interest. The premise was that the project must follow the modern neoliberal rule of being commercial, even though all of the electricity infrastructure in Australia’s history had been developed as public projects. If the government developed nuclear power at a capital cost of 2 per cent, it would be more than viable.