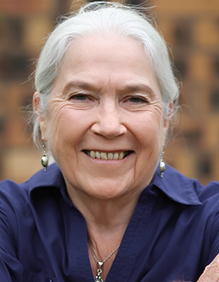 I’ve lived in the Hunter Valley all my life. I grew up on a dairy and crop farm in Phoenix Park and went to the Morpeth Public School, and later Maitland Girls High. After completing Year 10, I left school and worked in a pharmacy for a few months before taking up employment with the Commonwealth Bank, where I worked in their East Maitland branch for the next seven years. I left the bank in 1978 to have my first baby. That was the same year my husband Tom and I bought our first truck and kicked off our transport business which we have operated in the Maitland area for over forty years. We have two sons and a daughter who are all highly regarded for their work ethics and dedication to detail, which is reflected in their successful businesses. And, we have four beautiful grandchildren.

I don’t want my grandchildren, or any of the younger generation, to be denied the chance to reach their full potential because I didn’t take personal responsibility for political decisions effecting their futures. I can’t just hope things will change; I have to do something to make things change.

Before meeting the ACP in 1997, I thought small and local. I was politically naïve. Whilst I didn’t like changes that were happening in our country, like the shut-down of National Textiles because the government removed tariff protections for the textile industry, I thought there wasn’t much I could do about it. I was wrong, and I’ve been fighting for the Citizens Party’s policies ever since. Australia wasn’t always a speculative real estate bubble and seller of raw materials. Overturn the bad policy decisions, and Australia can become a productive and optimistic nation again!

My first Federal election was in 1998 in the seat of Hunter. If the Citizens Party’s warnings and policies back then were implemented, Australia would not be facing an economic breakdown crisis today.

The potential for Australia is huge but the major parties have an ideological commitment to the economic and geopolitical policies of the free market. That commitment is driving us headlong into financial and physical bankruptcy, and—if not overturned—war.

This is insane but it can be reversed! The Citizens Party’s policies are designed to do that.

History shows that when a country utilises national banking to direct the nation’s capital into developing a manufacturing base and building major infrastructure, regulates its industries and services, and protects its productive economy, that country will prosper and can fund a good healthcare system and education for its people.

When the United States utilised these principles, as it did under Abraham Lincoln and Franklin Roosevelt, America prospered. Today, China is the leading advocate of these principles, which is why it has lifted millions of their population out of poverty and built thousands of kilometres of hi-speed rail—something Australia only dreams about at election time.

The most important first step to turn the prosperity of the country around, is a government-owned and -directed bank such as the Citizens Party’s ready-to-go legislation for a Commonwealth Postal Savings Bank. I support a Postal Bank so we can break the monopoly of the Big Four banks and bring back economic development and prosperity to Australia.

I’m not just asking for your vote. Join me; join the Citizens Party. Get involved! Join us in demanding accountability and solutions for the country.