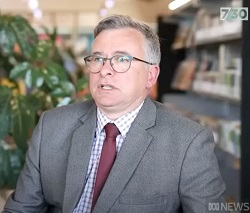 Success in the two key campaigns in which the Citizens Party is currently engaged can deliver death blows to the guardians locking us into a failed financial order. Our financial system is not our own. It is one interlinked element of a global superstructure, directed externally. If Australia were to take the Emergency Exit, utilising a makeshift escape route ahead of the system’s imminent breakdown, we can establish a fair and just financial architecture that provides vital oxygen—in the form of national credit—for economic growth, and at the same time disrupt the entire global system. That system is already being challenged by powerful nations including China and Russia, and countless others falling in with them to subvert the US dollar order (p. 11).

The ASIC inquiry. Publicly exposing the regulator of financial services and products that has left hundreds of thousands, possibly millions, of Australians without protection from financial fraudsters will rip a gaping hole in the fabric of the financial order. Along with the Australian Prudential Regulation Authority (APRA) and the Reserve Bank, our would-be regulators are in fact gatekeepers for the financial establishment, hiding behind the excuse of caveat emptor (let the buyer beware)—the market philosophy that throws anyone that can’t hold their own against the world’s most powerful banks on the scrapheap. Make your submission to the inquiry by 3 February. Details at citizensparty.org.au.

Regional bank closures. The fight against the Big Four banks and their defenders at the Australian Banking Association and in the Australian Parliament, who are scrapping banking services, making cash a thing of the past and crushing economic equality in the regions, is building steam. A flurry of media coverage over the past month (reported in our 11 January Media Release, “Media catching on to regional banking crisis, war on cash”) stemmed from local councils taking the fight to the banks, banding together for collective strength. Junee in NSW and Coober Pedy in South Australia are among the shires that are raising a stink about unaccountable banks leaving their economies in the lurch, and there are many more where they came from!

When parliament resumes sitting on 6 February, the Citizens Party will push for a real inquiry into regional bank branch closures by the Senate’s Rural and Regional Affairs and Transport Committee, with a crucial part of the terms of reference being the urgent need for a People’s Post Office Bank. Already 13 councils have passed resolutions for such a bank with more scheduled to debate the idea, and councils are primed to urge parliament to take up this inquiry as a step in that direction. Not only will a Post Office bank provide vital banking services for regional and rural communities, it can be directed to make loans, like the original Commonwealth Bank, to local councils and state governments, for urgently required infrastructure, investing in the untapped wealth of the nation.

The lack of a banking utility dedicated to growing the nation and the lack of a regulator to police corruption, has left Australians in a living Hell, even as the world enters depression conditions. Don’t bow to the blackmail of politicians who contend we must adapt to the new digital world—“change or die”, as the SA Opposition Leader David Speirs put it (p. 14). Insist on returning to a model that worked in previous periods of crisis, a model which put banking in the service of the many, not the few; its control in the hands of the public, via elected officials, not private interests. The current model is a failed experiment fashioned in the wake of the two world wars of the twentieth century and dictated to Australia by neoliberal think tanks dedicated to ripping up the sovereignty of nations by precluding national credit, and hence nation-building. Victory on the two battle-fronts on which we are engaged opens up the only financial exit plan.