Now available in pamphlet form and as a single pdf file is the May-June 2022 Australian Alert Service series “How ‘Operation China Threat’ demonised the Belt and Road Initiative”, by Melissa Harrison. The four articles document the methods and motivation of the disinformation campaign against China’s BRI in Australia and around the world. 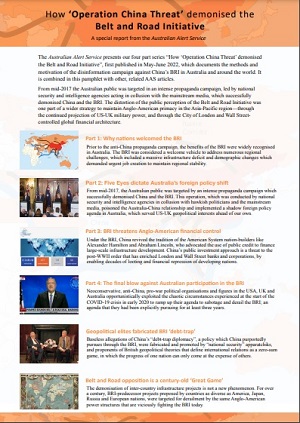 Since mid-2017 the Australian public has been targeted with propaganda, issued through mainstream media in coordination with national security and intelligence agencies and associated think tanks, to demonise China and the BRI. The distortion of the public perception of the Belt and Road Initiative is one part of a wider strategy for maintaining Anglo-American primacy in the Asia-Pacific region, through ever greater projection of US-UK military power, and through the City of London and Wall Street-controlled global financial architecture.

This series documents how under the BRI, China has revived the tradition of nation-builders like the Americans Alexander Hamilton and Abraham Lincoln, and their Australian co-thinker King O’Malley, who advocated using public credit to finance infrastructure development. China’s public investment approach is a threat to the post-World War II order, which especially since 1971 has enriched London and Wall Street banks and corporations, by enabling the looting and financial repression of developing nations. China’s alternative economic approach threatens the geopolitical power of the USA and UK, which rests upon the deregulated global financial system alongside military might.

China
Infrastructure
Belt and Road
Foreign Policy
[ Back to top ]