Recent media fanfare that one million species face extinction is nothing but propaganda to dupe the public into a “transformative change” that would reverse industrial progress and force most people into poverty. But the billionaires behind this propaganda still plan to maintain their lavish parasitical existence at your expense. The Intergovernmental Science-Policy Platform on Biodiversity and Ecosystem Services (IPBES) issued its alarmist 1,800-page assessment on 6 May, and predictably the corporate media reported it as fact. But computer models generated the nonsense million-species forecast in defiance of the reality that actual species extinctions have declined for well over a century. 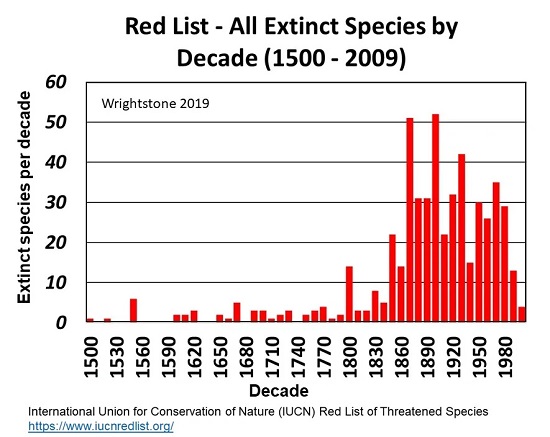 The Club of Rome, founded by billionaire banker David Rockefeller, made similar alarmist forecasts in its 1972 book The Limits to Growth. Supposedly the world would run out of gold by 1981, mercury and silver by 1985, tin by 1987, zinc by 1990, petroleum by 1992, and copper, lead and natural gas by 1993. The Club of Rome’s 1991 book The First Global Revolution made clear these elites’ intentions: “In searching for a common enemy against whom we can unite, we came up with the idea that pollution, the threat of global warming, water shortages, famine and the like, would fit the bill. … All these dangers are caused by human intervention in natural processes, and it is only through changed attitudes and behaviour that they can be overcome. The real enemy then is humanity itself.”

The Club of Rome now claims, “we cannot turn a blind eye to the dual tipping points of species extinction and climate change”. This elite club, like the billionaires at the WWF’s secretive 1001 Club, are the driving force behind the IPBES’s latest alarmism. This is clear given the coordinating role of the International Union for Conservation of Nature (IUCN), the leading environmentalist organisation founded by eugenicist Julian Huxley. In Jeju, at the 2012 World Conservation Congress, members mandated the IUCN to collaborate with IPBES through two formal Resolutions.

The IPBES demands a “transformative change”, defined in its Summary for Policymakers as “A fundamental, system-wide reorganisation across technological, economic and social factors, including paradigms, goals and values.” This includes “reducing consumption” and “reducing energy demands so as to reduce demand for biodiversity-impacting infrastructure”. While ostensibly addressing threatened species, the Summary for Policymakers alone has 61 references to “climate change” and a clear message to implement rapid reductions in greenhouse gas emissions.
Scientists challenge hoax

Greenpeace founder Dr Patrick Moore is perhaps the most prominent scientist to have exposed this IPBES extinction nonsense. In testimony before the US Congress on 22 May, Dr Moore ripped through the hoax:

“After 15 years in the top committee I had to leave as Greenpeace began to adopt policies that I could not accept from my scientific perspective. I have made it my lifelong mission to apply sound scientific principles when considering the critical environmental issues facing us today. …

“It is clear that the highly exaggerated claims of the IPBES are not so much out of concern for endangered species as they are a front for a radical political, social, and economic ‘transformation’ of our entire civilisation. Their recommendation for an end to economic growth alone condemns the developing world to increased poverty and suffering, and [demands] economic stagnation in the developed countries.

“Appealing to the ‘green’ urban class they recommend ‘urban agriculture and rooftop gardens’ as part of their ‘transformational’ agenda. No mention is made of eliminating millions of acres of former native ecosystems converted to biofuel plantations and solar farms. As with the manufactured ‘climate crisis’ they are using the spectre of mass extinction as a fear tactic to scare the public into compliance. The IPBES itself is an existential threat to sensible policy on biodiversity conservation.”

In 1996 Dr Moore wrote to then-WWF head Prince Philip over a similar alarmist claim. WWF called the forestry industry “the main cause of 50,000 [species’] extinctions”. But no such extinctions from logging had occurred at all, and the WWF was unable to provide the name of even one species as an example. As Dr Moore explained, these “extinctions” occurred only in a computer model at a Harvard University laboratory!

Veteran geologist Gregory Wrightstone has thoroughly analysed the IUCN’s Red List of Threatened Species, and proves the IPBES is just flat wrong. The Red List categorises 5,914 species as critically endangered and lists 872 species as extinct. Of these 872 extinct species, Wrightstone grouped the 529 species with a known extinction date by decade of extinction. His finding: “Instead of a steady increase in the number and rate of extinctions we find that extinctions peaked in the late 1800s and the early 20th century, followed by a significant decline that continues today. It is thought that this extinction peak coincides with introduction of non-native species, primarily on islands (including Australia).” The IPBES are fully aware of such facts but played a statistical sleight of hand, as Wrightstone reveals: “Data were lumped together by century rather than shorter time frames, which, as we shall see accentuates the supposed increase in extinctions.”

Wrightstone concludes: “This new extinction study is just the latest example of misuse and abuse of the scientific process designed to sow fear of an impending climate apocalypse. … Rather than an Earth spiralling into a series of climate catastrophes that threaten the planet’s life, we find that our planet and its estimated 8 million species are doing just fine, thank you.”

The raw numbers prove there is plenty of room for wild species. According to the Oxford University-based website ourworldindata.org, urban areas cover only one per cent of the Earth’s habitable landmass, while forests cover 37 per cent and shrubbery 11 per cent.