Time for Glass-Steagall Banking Separation and a National Bank

A handbook on Glass-Steagall banking separation, national banking, the crimes of the banks and 'bail-in'.
This 100 page document provides the urgently required solutions to rebuild the national economy right as a new financial crisis is unfolding. 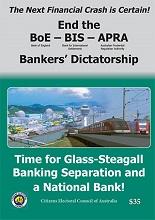 The Hamiltonian Revolution and FDR’s Glass-Steagall

Robert Barwick, CEC Executive Member and Research Director
This presentation at the CEC International Conference of March 2015, “The World Land-Bridge: Peace on Earth, Good Will towards All Men”, established the principles and outstanding historical examples of productive credit-creation in the United States.

The Australian Precedents for a Hamiltonian Credit System

Craig Isherwood, CEC National Secretary
Australia is one of the few nations in the world with a history of explicitly applying Hamiltonian
principles. Craig Isherwood brought this experience to life, in his speech to the March 2015 CEC
conference.

Part 2. Fraud and Crimes of the Banks

The current international monetary system includes the category of “too-big-to-fail” banks, which governments are supposed to protect above all other priorities. Our institutional flowchart and summary of the banks’ crimes, updated from its first appearance in the New Citizen in 2016, shows that protecting the TBTF banks is protecting systemic criminal activity.

In the ground-breaking investigations excerpted here, first published in 2013 and 2016, the CEC exposed the international megabanks’ scheme for “bail-in”—the confiscation of assets from bank shareholders, creditors and depositors in a crisis—and their drive to impose it worldwide.

Shut Down the Fraud of APRA

Australia’s banking regulator protects the big banks, rather than the public. Documentation of the CEC’s 2017-18 fight to block dictatorial bail-in powers for the Australian Prudential Regulation Authority, including the authority to confiscate bank bonds and deposits, appears here.

Crimes of the Australian Banks

This July 2017 CEC policy paper establishes the Glass-Steagall principle, for separation of commercial banking from investment banking and other financial services, as the precondition for a banking system that meets the credit needs of the real economy.

China: Glass-Steagall Banking System and the Belt and Road Initiative

China’s Belt and Road Initiative for infrastructure development, together with its programs to eradicate poverty, represent a new paradigm of economic development. They have been able to succeed because the Glass-Steagall principle was applied.

The 21st Century Glass-Steagall Act of 2017 (excerpts of bill, USA)

The Citizens Electoral Council of Australia has drafted this legislation to concretise the needed first step in banking reform, Glass-Steagall-model separation and protection of commercial lending from speculation, for Australia.