A Monstrosity Created by the City of London and Wall Street 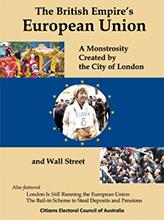 Former London mayor Boris Johnson, who spearheaded the campaign for Britain to vote “Leave” in the 23 June 2016 referendum on Britain’s membership in the EU, drew howls of outrage for his 14 May 2016 interview with The Telegraph, in which he compared the present European Union to Hitler’s domination of Europe.

But the dramatic evidence presented in this 56-page pamphlet demonstrates that Classical scholar Johnson was, if anything, far more right than he probably realised. After all, the universally acknowledged “father of the EU”, Jean Monnet (1888-1979), was a notorious pro-fascist ideologue, who had been investigated by U.S. President Franklin D. Roosevelt’s wartime government for his intimacy with the Nazis and French fascists over the previous decade. Moreover, the pamphlet’s extensive series of graphs showing unemployment soaring across Europe, as birth rates plunge and death rates rise, prove that the continent is indeed fast becoming “one giant concentration camp”, as charged by Manuel Alegre, the famed poet, Portuguese Socialist Party leader and two-time presidential candidate already in a 26 March 2013 article in Jornal i.

This pamphlet delves into the origins of the horror that is the EU today. Monnet’s entire career and his plot to create a “single Europe” were sponsored by those same City of London and Wall Street forces, typified by the Cliveden Set and the Anglo-American Round Tables, who had sponsored the rise of Hitler in the first place. With the disappearance of “national fascisms” in the fires of World War II, these circles then plotted for a more durable “universal fascism”, a world government pivoted upon a “united Europe” merged with an Anglo-American empire, precisely as Churchill had called for in his famous 1946 Iron Curtain speech in Fulton, Missouri standing alongside U.S. President Harry S Truman. The same Winston Churchill founded the European Movement in 1948, to help create today’s EU. The intended EU/US Transatlantic Trade and Investment Partnership (TTIP), for example, is simply one more step on that same path of subordinating sovereign national governments to a global corporativist dictatorship.

It is no surprise, therefore, that the City of London and Wall Street’s megabanks were pouring untold millions into “Remain”, while David Cameron’s sole concern in his “renegotiation” of Britain’s role in the EU was to protect the City of London, i.e., to enhance its ability to loot Europe, just as it loots the UK itself. As Italy’s former economics minister Giulio Tremonti, an informed insider, summed up the case in his 2012 book Uscita di Sicurezza (Emergency Exit), the EU constitutes the rule of “financial fascism”: “What to date has been seen in Europe and in certain states is only the beginning of that which, if we don’t recognise it, will take shape in a growing transfer of power outside the scope of republican democracy, into an unwritten—indeed, it no longer even needs to be written—Ermächtigungsgesetz. The law for full emergency powers inspired by [Nazi theorist] Carl Schmitt, and with this the emergency—I repeat—of a new form of fascism: financial fascism, white fascism”.

The British vote to leave the EU is significant. But the nations of the United Kingdom and of the entire trans-Atlantic sector, and well beyond, will never achieve true freedom, real economic growth, and basic human dignity without overthrowing that City of London/Wall Street dictatorship of international finance, whose devil’s brew of wild speculation-and-austerity caused the 2008 Global Financial Crisis and now threatens a far worse one—thus the mad drive for EU-pivoted dictatorial rule and NATO’s modern Drang nach Osten against Russia. The pamphlet therefore concludes by providing the methods to do that, beginning with breaking up the too-big-to-fail (TBTF) London and Wall Street criminal combines through Glass-Steagall legislation to separate the legitimate commercial functions of normal banks, from the wild speculations typical of investment banks and all of today’s TBTF banks.

Into the Present: London Still Runs the EU