Do You Want To Defeat Terrorism? Establish a New, Just World Economic Order!

This pamphlet lays out the beautiful prospect of a new, just world economic order, already blooming between the BRICS nations (Brazil, Russia, India, China and South Africa) and collaborators, with crucial background on the role of the LaRouche movement internationally in bringing it about.

In the face of a new oncoming global financial crisis nations face a choice: to remain with the policies and alliances that are driving the collapse and war danger, or to join with fellow nations to establish a new economic world order that can guarantee peace and security. To secure this new economic order, the BRICS nations together with a  growing number of collaborators, have forged ahead with grand development projects, and agreements  on the credit mechanisms to fund them. This includes China's world-spanning Belt and Road Initiative, launched in 2013. The fading trans-Atlantic powers view the BRICS developments with ill-disguised hostility, as a threat to their hegemony; nevertheless the BRICS invite the US and Europeans to collaborate with them in economic development. 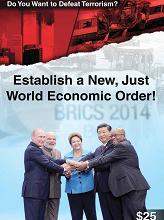