Rio Tinto's campaign to smash trade unions in Australia has to be seen in the context of what Rio Tinto is: the leading company in the British Crown's global raw materials cartel. As the financial crash has intensified, the British oligarchy has used its companies like Rio Tinto (in which Queen Elizabeth is the largest non-institutional shareholder) to increase its economic power through the control of raw materials.

Standing in its way is national sovereignty, and national institutions like organised labour. STOP the Queen's company from using its octopus-like network of control over Australia's business and political life to smash our unions. 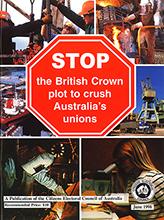 A limited number of hard copies of this pamphlet are still available from the CEC.
Contact us on 1800 636 432 to order a copy, or to speak to one of our researchers/organisers.

The Crown's plot to crush our unions

Drugs and privatisation
The end of the nation-state
Revolution by think-tank: Mont Pelerin comes to Australia
Lord Harris: "You have to smash the unions!"
Mont Pelerin's policies arefascist

2. A case study: The NFF/HR Nicholls plot to crush the MUA

4. Zombies for the Crown

Her Majesty's brainwashing centre: The Tavistock Institute
Tavistock comes to the Australian coalfields
The psychological problems of the Australian trade union movement

LaRouche on the New Bretton Woods
A new national bank

Appendix A. The Crown's Australian assets and the war against labour
Appendix B. The current board of Rio Tinto
Appendix C. LaRouche: British intelligence attacks the CEC
Appendix D. Flow chart: The Rio Tinto Octopus

The Rise and Fall of Australia

The British Crown's assault against the Commonwealth

Australia needs a true, not a "banana" Republic
At the crossroads
LaRouche: What is the British Monarchy?

2. Labour versus the "Money Power": The battle for the Commonwealth Bank

3. WWII: British treachery in the Pacific

4. The destruction of the Labor Party after the war

Appendix A: Jack Lang on the City of London
Appendix B: The Australian Ideology