Reality check: China does not own most of Australia

For the record, if you don’t like foreign investment in Australia, support the Citizens Party’s fight for a national bank. We don’t need it. However, the Citizens Party objects to the obsession about China “owning” Australia, for two reasons: 1) it’s being used by neoconservative ideologues, intelligence agencies and their media stooges to fan the flames of fear so Australians support an Anglo-American confrontation with China; and 2) it isn’t true.

The impression given by the media is that China is buying up everything. For instance, a 9 July 2019 headline in the Daily Mail blared: “First our land, now our WATER: How China is the biggest buyer of Australia’s most precious resource”. This article went viral on Facebook and other social media. As usual, buried in the article and unread by most people was the information that in fact, China was the joint-equal biggest foreign owner of Australian water, and the country that owns as much as China is the United States. But only China was named in the headline. This is the sort of reporting that has convinced Australians that China owns everything.

The truth is very different. The Department of Foreign Affairs and Trade (DFAT) keeps annual figures on levels of foreign investment in Australia, which show that China is a tiny foreign investor relative to its size and to the other countries that invest more than it does. What’s more, its investment is falling, not rising. 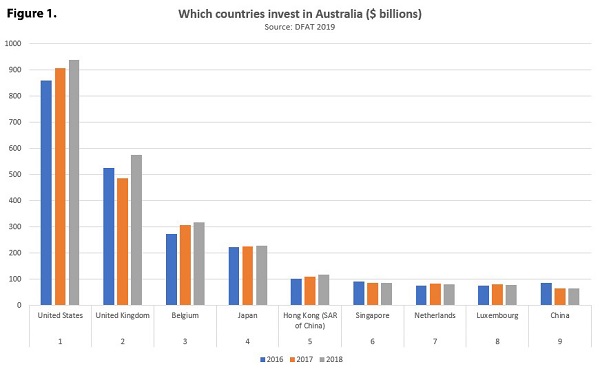 Even more amazing are the countries that outrank China as investors, including Belgium (for some unknown reason a huge investor) and two of the tiniest countries in the world, Singapore and Luxembourg. Yet all you hear is China, China, China, China. Someone really wants you to hate China.

(Given the way Liberal MP Gladys Liu was treated as a virtual foreign spy when she got elected to Parliament, should questions be raised about Belgian foreign influence on Australia, and the fact that a Belgian, Mathias Corman, has control over Australia’s public purse as finance minister? In case you can’t tell, that’s a joke, but it’s exactly the kind of demented paranoia we are experiencing about China.) 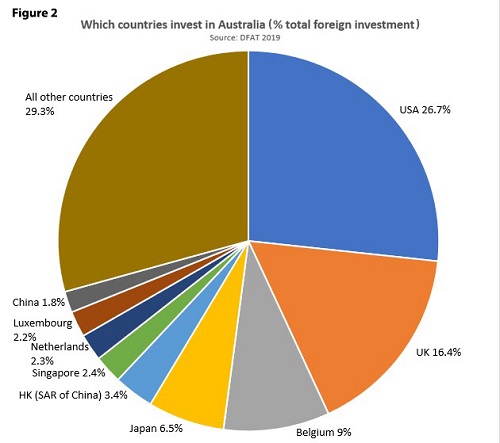 Figure 2 shows the percentage of total foreign investment each country owns. China’s is a tiny 1.8 per cent. As you can see in both Figures 1 and 2, while China is ninth, China’s Special Administrative Region (SAR) Hong Kong is fifth. Even if the two were combined, Chinese investment would still be fifth, but it’s more complicated than that. As a SAR until 2047, Hong Kong operates under its own laws and with largely the same financial arrangements as under British rule. This means that foreign investment from Hong Kong includes British investment, not just Chinese. In Australia, however, it’s all called Chinese. Hong Kong’s China Light and Power (CLP) owns one of Australia’s three biggest electricity companies, EnergyAustralia, but it is owned by the wealthy British Kadoorie family.

DFAT’s figures show that in fact Australia is a bigger foreign investor in China than China is in Australia. Critics often say that China doesn’t reciprocate, we can’t invest in China the way it does here. Clearly Australians can and do invest in China. Of course, our investment would have to comply with China’s laws, but investors know that in advance. 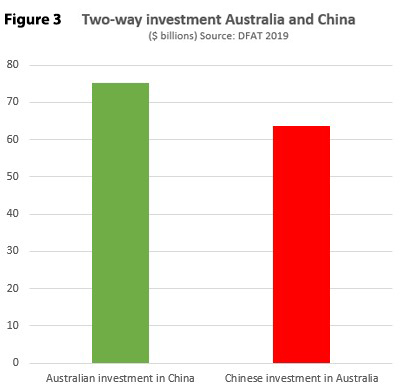 These figures provide context to the current angry call to punish China for the coronavirus pandemic by confiscating its investments. $63 billion won’t go anywhere near to paying for the more than $300 billion the government has spent on the crisis so far. But instead of being sucked into the blame game, we should understand that such claims depend on the same fear and prejudice that has led most Australians to believe China owns our whole country.