Throughout the series of terror attacks since the 7/7 2005 London subway bombings, including the brutal murder of Fusilier Lee Rigby in May 2013 and the Westminster, Manchester Arena, and London Bridge vehicle, knife and bomb attacks of 2017, there runs a single thread. Each of the perpetrators was either well known to MI5 and MI6, or, like 7/7 mastermind Haroon Rashid Aswat and the infamous Abu Hamza who indoctrinated hundreds of terrorists at the Finsbury Park Mosque in north London, were actual agents of one or both intelligence services.

This pamphlet documents that shameful reality, making the case that British Intelligence agencies are not only protecting known terrorists, but deploying them as a geopolitical tool to unleash chaos and war. 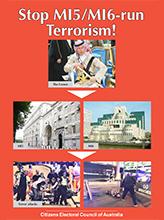 “The Mask of Anarchy”, by Percy Bysshe Shelley