Head of the Monetary and Economic Department at the Bank for International Settlements Claudio Borio, with Robert McCauley and Patrick McGuire, issued a report on 5 December (Quarterly Review), “Dollar Debt in FX Swaps and Forwards: Huge, Missing and Growing”, referring to off-balance-sheet derivatives exposure that does not appear on bank balance sheets. The report estimates the “hidden” exposure that major overseas banks have to foreign exchange (FX) derivatives based on the US dollar at US$39 trillion. “Much of this debt is very short-term and the resulting rollover needs make for dollar funding squeezes”, says the report. Such squeezes have necessitated “bank swap lines that are set in a fog, with little information about the geographic distribution of the missing debt.” (Emphasis added.) 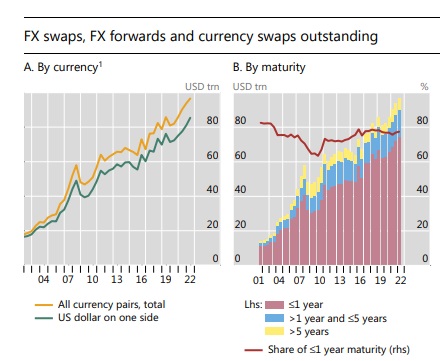 This US$39 trillion off-balance-sheet debt of the banks, alone, is over ten times the value of their capital. There is a further US$26 trillion worth of swaps held off-balance sheet by offshore non-bank financial outfits, which is double the size of their on-balance-sheet dollar obligations. The exclusion of trillions of dollars of obligations from standard debt statistics, amounts to “huge, unseen dollar borrowing”, forming a “blind spot” in global markets and a danger point for the USA itself. In fact, the US dollar value of foreign exchange swaps, forwards and currency swaps “exceeds the stocks of dollar Treasury bills, repo and commercial paper combined”, states the BIS report. Swaps were a flash point in both the 2008 and the March 2020 crises, it recounts, with a crunch on dollar borrowing resulting in central bank swap lines being set up to funnel dollars to offshore banks.

The BIS describes the total volume of swaps and forwards, in all currencies, as a “staggering” US$97 trillion and the US dollar, it adds, is on one side of 88 per cent of those outstanding positions.

The hidden leverage will likely be ignored until the next time liquidity is squeezed, said the BIS, when it could affect the portfolios of pension funds and insurance companies utilising such instruments. After the recent UK bond crisis, this risk is palpable.

There aren’t enough dollars in the world to cover the liabilities of nations, or bank’s derivatives, nor would the Fed be able to print them.

Additional warnings have been sounded: Writing for Project Syndicate on 2 December, prominent New York University economist Nouriel Roubini warned of “The Unavoidable Crash” of a “massive mountain of public- and private-sector debt” now that ultra-loose monetary policy has turned to tightening. Total debt as a share of GDP has risen from 200 per cent in 1999 to 350 per cent in 2021; 420 per cent in the USA. He forecasts a “deep, protracted recession—on top of a severe financial crisis” that will “feed on each other”.

Economist and former Pimco CEO Mohamed El-Erian has warned that crises such as the UK gilt crunch, the Sri Lankan debt crisis and collapse of crypto platform FTX are canaries in the coal mine—signals of a broader crisis. Worse, “financial accidents”, he said, can “spill back into the real economy”.

Financial Crisis
[ Back to top ]