What do we fight for in this election? 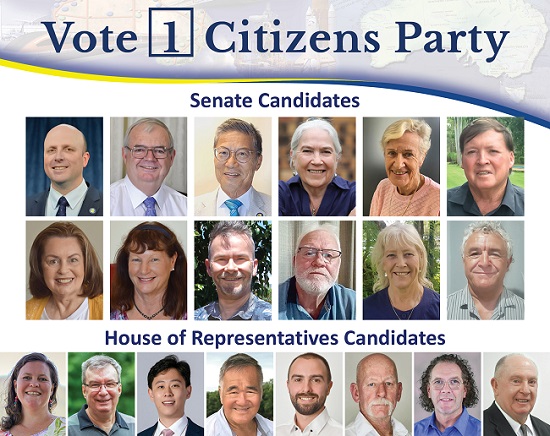 The election is on. But the political sideshow that will bombard our senses for the next five and a half weeks won’t change the future of Australia. What we do will. It’s imperative to be clear on what we’re fighting for.

First, peace, anchored in a new international order based on mutual respect and cooperation between sovereign nations on the common aims of mankind. The Citizens Party is the only Australian political party that is openly opposing the geopolitical agenda that has put Australia on the path to war with China (see pp. 11-12 for the latest alarming analysis from former Australian ambassador John Lander and former New Zealand associate foreign minister Matt Robson). The path to war is paved with a million lies that incite Australians to fear and hate China, and Russia, or whichever other country may be a target. We must have the courage to expose those lies and warn our fellow Australians of the unthinkable consequences of where we are heading. Just as important, however, we must also share our vision of how peaceful global relations are possible, if our nation and our “allies” can overthrow the power of Wall Street and the City of London inside our countries, as it is that power which is the driving force behind global conflict.

Which brings us to our next, equally important and related objective: economic justice and progress. The Citizens Party is leading the fightback against the neoliberal hijacking of our nation forty years ago, which has crushed our productive economy under the heel of the Australian arm of the London-Wall Street banking nexus. They dismantled our public banking institutions, smashed our sovereign manufacturing capacity, busted unions and other social institutions that fought for the common good, gutted important public infrastructure and services like healthcare (p. 8), and turned a once productive powerhouse into a nation of debt-slaves. Yet in the same period in which the lives of everyday Australians have gone backwards, the lives of everyday Chinese have advanced dramatically from the amazing economic progress powered by China’s system of public banks investing in productive industries and infrastructure! This is why the London-Wall Street empire and its associated military-industrial complex have targeted China for war.

We must break their power, so Australians can progress again. In that regard, don’t underestimate the power of our policies like the postal bank and development bank, preserving cash, stopping bail-in, and compensating financial victims. These are the policies that enable our fellow Australians to see that the current system is not there to serve them, but to allow the private financial institutions to exploit them. People can see in the postal bank policy how a public bank would fully protect their savings, preserve cash, guarantee services and provide credit for all communities to develop and grow, and invest in Australia’s future. They can see how the development and infrastructure banks would invest in the long-term industries and projects that the private banks have starved of credit, in their mad pursuit for gambling profits from the housing bubble. They can see in the fight for the Sterling First victims how the government should administer justice to financial victims, by ensuring that the financial system is properly policed by effective regulators which are feared by the banks and financial predators, and by ensuring that innocent victims are properly compensated. No more excuses–the same Morrison government that refuses to compensate deserving financial victims has just paid more than $500,000 to compensate the jilted mistress of a Cabinet Minister to try to keep her quiet. For too long Australians have been conditioned to accept this kind of blatant corruption—it’s time to break them free and show them we can achieve economic justice.

In this fight for our future, the next five weeks is an opportunity to seize with our campaigns. But the fight goes on the very next day.