The massive explosion in media stories of Amazon forest fires is an act of psychological warfare on the population, when in fact nothing unusual has occurred. The NASA Earth Observatory’s official statement makes this clear: “As of 16 August 2019, an analysis of NASA satellite data indicated that total fire activity across the Amazon basin this year has been close to the average in comparison to the past 15 years.” While peddling the “lungs of the earth” myth, CNN, Sky News, BBC, ABC et al. repeated without question French President Emmanuel Macron’s wild claim that the Amazon produces 20 per cent of the world’s oxygen. Science tells a different story. Phytoplankton in the world’s oceans produce far more oxygen than all the world’s forests combined. In fact, due to plant respiration at night-time and plant decay, the Amazon’s net oxygen production is about zero! 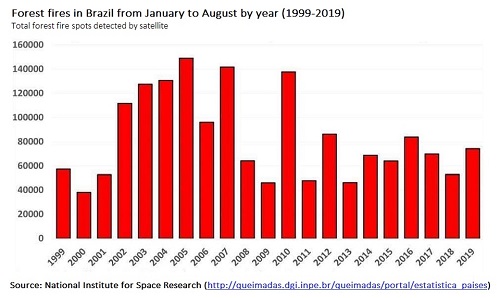 The Amazon media hysteria has nothing to do with science or fact. It’s a political power battle run from the highest levels of the British Crown/City of London-centred establishment. This is clearly demonstrated through Prince Charles’s role as President of WWFUK, the environmentalist organisation founded by his father Prince Philip and backed by the who’s who of billionaires in the secretive 1001 Club. On 21 August WWF-UK set the ball rolling with the following tweet: “There was worldwide outcry when the Notre Dame cathedral was on fire. Why is there not the same level of outrage for the fires destroying the #AmazonRainforest?” The following day, President Macron tweeted: “Our house is burning. Literally. The Amazon rainforest—the lungs which produces 20 per cent of our planet’s oxygen—is on fire. It is an international crisis. Members of the G7 Summit, let’s discuss this emergency first order in two days!” German chancellor Angela Merkel backed Macron’s call and Pope Francis chimed in too: “That lung of forests is vital for our planet”, he said, calling for international action. London’s mayor, Sadiq Khan, tweeted that the fires were being “aided and abetted by the Brazilian government”. The burning of the rainforest was “an act of shocking environmental vandalism with global consequences”. Celebrities including Leonardo DiCaprio and Madonna also weighed in.

This orchestrated campaign appears to have backfired. Brazil’s President Jair Bolsonaro tweeted: “We cannot accept that a president, Macron, unleashes unreasonable and gratuitous attacks on the Amazon, nor disguises his intentions behind the idea of an ‘alliance’ of the [G-7 countries] to ‘save’ the Amazon, as if we were a colony or no man’s land.” He also wrote: “Other heads of state sympathised with Brazil, after all respect for the sovereignty of any country is the least that can be expected in a civilised world.”

The lie that the Amazon forest serves as “the lungs of the planet” is so easy to refute that even some of the establishment media are now backtracking. A 26 August Forbes column by Michael Shellenberger, titled “Why Everything They Say About The Amazon, Including That It’s The ‘Lungs of The World’, Is Wrong”, is a good start to get some scientific facts. Shellenberger, named a Hero of the Environment in 2008 by Time magazine, pulled apart the absurd smoke and mirrors of Amazon stories. The photo of Amazon fires that DiCaprio and Macron shared is over 20 years old! The photo Madonna and American rapper Jaden Smith shared is over 30!

Shellenberger quoted a world-leading Amazon forest expert Dan Nepstad, who said: “We don’t know if there are any more forest fires this year than in past years, which tells me there probably isn’t. I’ve been working on studying those fires for 25 years and our [on-the-ground] networks are tracking this.” As for the “lungs of the planet” claim: “It’s bullshit”, said Nepstad. “There’s no science behind that. The Amazon produces a lot of oxygen, but it uses the same amount of oxygen through respiration so it’s a wash.”

Fires in the Amazon region are mostly not in the old-growth rain forest at all, but in land set aside for agricultural use. But anyone concerned about deforestation should note that in the last ten years, annual deforestation has been less than half that of previous decades. Moreover, evidence indicates a significant portion of the Amazon was open grassland before the arrival of Europeans, not the tall-canopied forest it is today. And in 1987 American archaeologist Anna Roosevelt of Chicago’s Field Museum of Natural History, and her collaborators, presented evidence of shell middens and earthworks extending for tens of square kilometres, all along the lower Amazon River, proving that relatively advanced cultures arose in the Amazon region thousands of years ago, and that the region’s population was once much larger than it is today. These civilisations had largely collapsed even before European colonisation, and in recent centuries forest has overgrown the area.