ANZ bank’s updated terms and conditions for its deposit accounts, released 30 September, reveal how the 2018 “bail-in” law that the government snuck through the Senate could be used to seize deposits. 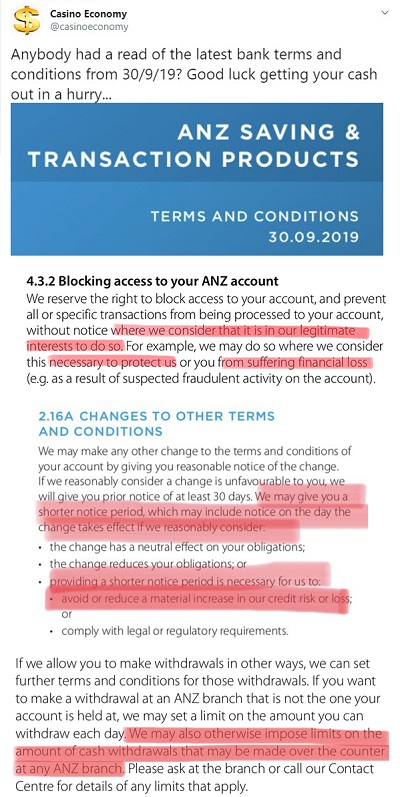 On 1 October, a Twitter user going by the name Casino Economy (@casinoeconomy) tweeted highlighted images of the new clauses with the message: “Anybody had a read of the latest bank terms and conditions from 30/9/19? Good luck getting your cash out in a hurry...”

The changes, noted under “2.16A Changes to other terms and conditions”, enable ANZ to change terms and conditions on short notice, i.e. the same day—effectively without notice, if the bank “reasonably” considers the change is necessary for ANZ to “avoid or reduce a material increase in our credit risk or loss”, or to “comply with legal or regulatory requirements”. ANZ further states that it “may impose limits on cash withdrawals that may be made over the counter at any ANZ branch”. Finally, ANZ states it reserves the right to block access to your account “without notice” if it considers it necessary to protect the bank, or you, from suffering financial loss, giving the example of fraudulent activity on the account.

ANZ has revealed the way in which the 2018 APRA bailin law, the Financial Sector Legislation Amendment (Crisis Resolution Powers and Other Measures) Act 2018, could be used to bail in Australian deposits. The government has claimed all along that the law can’t be used to bail in deposits, insisting that it is only applies to contractual bail-in instruments that have bail-in terms in their terms and conditions. These are called bail-in bonds, and they are sold with much higher interest rates than normal bonds on the basis that if the bank runs into trouble, they will be converted into bank shares or written off.

In opposing the law, the Citizens Electoral Council identified the now famous loophole in the Act, where it states in the Definitions that the conversion and write-off provisions apply to the categories of bank capital that include bail-in bonds, “or any other instrument”. In response to the CEC’s concern, all the main financial authorities, Treasury, RBA, APRA and ASIC, made special submissions to the Senate inquiry into the law, to provide assurances that it wouldn’t apply to deposits. The language is too broad, the CEC still insisted, and pointed out that government assurances are meaningless if not written into the legislation. The government destroyed the credibility of its assurances when it was notified by Pauline Hanson’s One Nation that they would move an amendment to the bill to explicitly exclude deposits from “any other instrument”, and rushed the bill through the Senate while the One Nation senators were absent from the chamber waiting to hear back from the government about their amendment.

In October 2018, independent economist John Adams and banking expert Martin North were the first to reveal how the loophole in the bail-in law could concretely apply to deposits. In response to the government’s insistence that it only applied to financial instruments that had bail-in in their terms and conditions, Adams and North questioned: has anybody looked at the terms and conditions of deposit accounts? They did, and what they discovered and exposed in 2018 showed bail-in could definitely apply to deposits.

In their 10 October 2018 video post on the Digital Finance Analytics YouTube channel, “An Urgent ‘Bail-In’ Update—Parliament Is ‘Too Stupid To Be Stupid’”, Adams and North revealed that every major bank had an over-arching clause in their terms and conditions that allowed them to change their terms and conditions at any time, effectively without notice. One of the reasons they all offered for having to make such changes was complying with directives from the regulator; the 2018 bail-in law empowered bank regulator APRA to order bail-ins.

Adams and North pointed out that in a crisis, APRA would be able to order the banks to insert bail-in into their terms and conditions effective immediately. APRA could then order an immediate bail-in of deposits, before bank customers had time to ask what was happening. In one possible scenario, if Deutsche Bank went under on a Friday afternoon, which is Friday evening Australian time when banks are closed for the weekend, and it triggered the Lehman-style global meltdown that the IMF has warned of, APRA would be able to order the banks to change their terms and conditions over the weekend, and impose a bail-in, before the banks opened for business again on the Monday morning.

The most recent updates to ANZ’s terms and conditions demonstrate it has taken steps to control and restrict deposits, which would facilitate a bail-in. AAS understands other banks have taken similar measures. Australians will only be protected from bail-in if the Act is amended to explicitly exclude deposits from “any other instruments”, which the CEC/Citizens Party is working hard to achieve.