Julian Assange remains in jail in the UK as a political prisoner while the US Biden administration pursues his extradition to the USA under the Espionage Act. In recent developments, UK Foreign Office documents released to Declassified UK as well as the published diaries of former foreign office minister Sir Alan Duncan—who was a key player in the Assange negotiations—expose a wide-ranging UK government campaign to force Assange from the Ecuadorian embassy. These revelations make a mockery of the UK and US governments’ concerns of “safeguarding those vital democratic bulwarks in our media freedoms”, as UK foreign Secretary Dominic Raab expressed on 3 May for World Press Freedom Day. 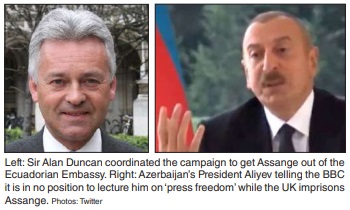 In a 28 April article journalist Matt Kennard of Declassified UK revealed the latest details exposing the UK government’s attack on Assange. Foreign office minister Sir Alan Duncan in a March 2018 one-on-one meeting with Prime Minister Theresa May suggested the PM “might want to butter up” Ecuador’s president to get Assange out of the Ecuadorian embassy in London. Later in the year, May’s government spent £20,000 to bring Ecuadorian officials including the defence minister to UK. Duncan arranged a 13 April 2019 Daily Mail hit piece on Assange days after his eviction from the embassy. The same minister gave Ecuador’s president a plate from the Buckingham Palace gift shop to “say thank you” for handing over Assange.

In July 2018, Philip Barton, then director general of security at the Foreign Office, flew to Ecuador for “short notice bilateral meetings” with its foreign ministry. Travel logs show that a week after his return he travelled to Cheltenham for “meetings at GCHQ”, the UK’s largest intelligence agency. National security adviser Richard Moore, now head of the Secret Intelligence Service (MI6) was in Ecuador in March 2019, two weeks before Assange was expelled from the embassy. And records confirm he spent £4,469 on a businessclass fight to Ecuador.

In a recent interview, Pulitzer Prize-winning journalist Chris Hedges explained that “the mere fact that UK police under Theresa May were allowed into the Ecuadorian embassy is a violation of Ecuadorian sovereignty. Lenín Moreno, the new president, who was essentially bought off with IMF loans and everything else by the United States, stripped Julian of his Ecuadorian citizenship. Rafael Correa, the previous president, had given him citizenship.” This violation of law fits a disturbing pattern. For example, recent leads indicating that the CIA spied on Assange are under investigation by Spain’s High Court which is probing ties between US intelligence and a Spanish security firm, UC Global, which monitored the WikiLeaks founder at the Ecuadorean embassy in London.

Concerningly, former UK ambassador Craig Murray, who was scheduled this month to give evidence in Spain regarding the alleged spying, has been ordered to surrender his passport by 19 May and has been sentenced to eight months’ jail in an extraordinary ruling of contempt of court. Murray tweeted 11 May, “Actually what I found most shocking about that was the peculiar determination of the judges to make sure that, I am not allowed to go to Spain to testify in the criminal prosecution for the CIA spying on Assange’s legal team.”

Murray’s extraordinary eight-month prison sentence for the obscure “crime” of publication of “jigsaw identification” refers to the possibility that a person may piece together information from various sources to arrive at the identification of a protected witness. Murry is fighting the charge and has many supporters including Hugh Kerr, former Labour Party Member of the European Parliament who called the verdict and sentence “a real threat to civil liberties”. Award-winning investigative journalist John Pilger said, “In these dark times, Craig Murray’s truth-telling is a beacon. He is owed our debt of gratitude, not the travesty of a prison sentence which, like the prosecution of Julian Assange, is a universal warning.” Assange’s father John Shipton on 15 May said, “They had one reporter in all of Scotland who speaks eloquently and truthfully, just one. His name’s Craig Murray. In their foolishness they decide to destroy him.”

On 4 May the European Federation of Journalists updated its list of journalists in jail in Europe, with Julian Assange listed as imprisoned in the UK. On 7 May Assange’s partner Stella Moris tweeted a video of Azerbaijan’s President Ilham Aliyev discussing Julian Assange in a BBC News interview. “This video has gone viral with 1.6 million views in just over 24 hours”, tweeted Moris. “Azerbaijan’s President Aliyev tells the BBC it is in no position to lecture him on ‘press freedom’ while the UK imprisons #Assange ‘killing him, morally and physically’ for doing journalism.” The BBC interview was from 6 November 2020 but its relevance now following World Press Freedom Day on 3 May is not lost on thinking people who can see the uncut version online.

One important concern for Assange’s prospects of release is the network of lawyers associated with his defence and their ties to international conman William Browder and his campaign to destroy constructive dialogue and cooperation with countries like Russia and China, by weaponising human rights concerns through so-called Magnitsky Acts, which sanction individual officials in targeted countries. Investigative journalist Lucy Komisar has repeatedly noted that several people connected to Doughty Chambers, where Assange’s lawyers are based, were also effectively working for Assange’s persecutor, the US government, through their representation of Browder. Celebrity Australian legal expert Geoffrey Robertson, for instance, has openly promoted the hoax of Magnitsky Act legislation and Browder’s global campaign. Sanctions under Magnitsky legislation are welcomed by the profiteers behind the wars that Assange’s WikiLeaks has done more than anyone to expose. How can Doughty Chambers truly defend Assange when they are actively campaigning for the pro-war agenda of the US and UK governments that want him to rot in jail?