Proposed water pipelines from Tasmania to the mainland on the seabed of Bass Strait will be important to Victoria and South Australia’s long-term water security given projected population growth and the prospect of inevitable future droughts. On 27 March 2020 the Victorian Government announced an order of 125 gigalitres (GL) of water from the Wonthaggi desalination plant for the 2020-21 supply year to boost water storages. The plant has a capacity of 150 GL, which may not be enough to see us through the next drought without restrictions. 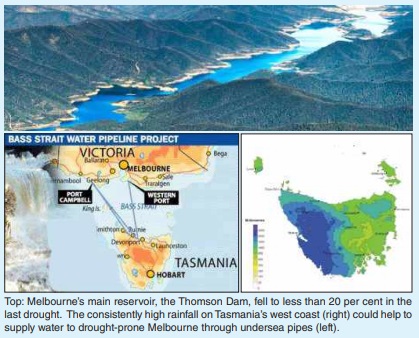 In 2007 the Bass Pipelines consortium unveiled a $2.5 billion plan for three 2-metre diameter pipelines across Bass Strait, which would collectively supply 750 GL of water per year to mainland Australia. The State governments of Tasmania and Victoria turned down the plan, and Victoria instead built the $5.7 billion Wonthaggi desalination plant under a public-private partnership. Bass Pipelines’ initial proposal would see two of the pipes ending at Port Campbell and another at Western Port. Geoff Croker, a civil engineer and member of the consortium, explained that water purchased by the mainland would provide $400 million annually to Tasmania and would be much cheaper than from desalination. A win-win for all States!

The beauty of western Tasmania is that the rain almost never stops. It’s rare to get just one dry day! Even in 2018-19 when Australia had the lowest rainfall in almost 50 years, Tasmania’s west coast received its average rainfall. And this is more than triple the average annual rainfall of Melbourne. In 2018-19 farms in Tasmania only used 287 GL of water. But as Croker notes in his 2008 submission to the Inquiry into Melbourne’s Future Water Supply, Tasmania has a known annual runoff of 45,000 GL and its north-west catchments have a known average annual runoff to sea of 5,300 GL.

In 2010 filmmaker Christopher “Topher” Field produced an informative and entertaining short video available on YouTube explaining in layman’s terms why piping water across Bass Strait makes perfect sense. He noted that the proposed water source at Lake Cethana on the River Forth sits at more than 200 metres above sea level, so water would simply flow via gravity to Melbourne. Cardinia Reservoir, Melbourne’s second-largest water supply, has a full supply level of 167 metres above sea level, so no expensive pumping is needed.

Topher referenced the June 2009 Final Report of the Inquiry into Melbourne’s Future Water Supply, and its minimal content considering the pipeline option despite four submissions in favour of such a proposal. In 2 February 2009 testimony to the Inquiry, Croker said there are plenty of existing dams in Tasmania. “All that has to happen is that the dams be connected. The connection I am looking at specifically is to the Forth River, but there are two streams that can be connected into this system. They have 5,300 gigalitres running off to the sea per annum. … Some of that spare water could be sold to Melbourne.”

“‘How do we get it here?’ is a good question. We build a pipe that is 350 kilometres long from around Melbourne to around Burnie and put it under the sea. People say to me, ‘Well, who else has done this?’ The facts are that the oil and gas industry has been doing this for an awfully long time. There are lots of pipes—hundreds of them—under the sea, in far more onerous locations. They go down to literally 1,000 metres deep these days and they go across mountain ranges. They even have tunnels underneath the sea. That is done at a far lower cost than a desalination plant, over longer distances et cetera.”

Croker specified a 2.5 metre diameter would be best and the build and manufacturing would be done locally, which new jobs Australia now desperately needs. “Pipe would be made in Western Port and then fed into the Western Port bay and sunk until there was enough pipe ready to roll across Bass Strait. It can be made in very long lengths. Typically Norwegian pipe is made in 500-metre lengths, but I think this particular pipe could be made in significantly long lengths, probably up to 5 kilometres.”

Croker continued, “People say to me that 2.5 metres is a very large diameter. It is. Gas pipes tend to be up to 1.4 metres in diameter, but at very great depths—they can be up to 1,000 metres. [Bass Strait has an average depth of only 60 metres.] This is a pipe that would be one-half an inch thick only. It would have a plastic lining internally and externally and would be made of carbon steel. The connectors at both ends would be plastic—when I am talking about plastic, I am talking about [fibre]glass-reinforced plastic—and that pipe would be made in Adelaide.”

Tasmanian Water Minister Jeremy Rockliff in December 2014 wrote to a constituent stating, “the Government will not be proactively supporting any proposals to pipe water to the mainland”. His weak objection was that a number of proposals “have been mooted” but they were “very preliminary and nothing concrete has materialised”. Political pressure can shift such inaction. The timeline to build a pipeline is two and a half years plus an initial six months of design work, as Croker explained in testimony. We could have it ready before the next major drought.