A public post office bank can transform Australia, just as the original Commonwealth Bank did after it started in post offices 110 years ago in 1912. This is an economic policy solution which all Australians can get behind, and which will have a far-reaching positive impact. Here are just Seven of the benefits: (Click on a banner to expand) 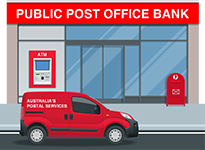 Reliable branch services—Post offices are permanently accessible to all Australians, unlike bank branches, which the private banks are closing all around Australia to maximise their profits—all while taking advantage of post offices to continue to provide banking services to the banks’ customers.

Australia Post is mandated by the Australian Postal Corporation Act 1989 to provide mail service that is “reasonably accessible to all people in Australia on an equitable basis”.

No discrimination—As a public institution, the postal bank would not be allowed to discriminate against particular businesses or individuals, which means no lawful customer would ever be “de-banked”.

Fully secure savings—As it would be owned by the government, deposits in the bank would be fully government-guaranteed (not just up to the $250,000 limit that the government’s Financial Claims Scheme covers in the private banks).

That means the post office bank would not default on deposits, nor would your deposits be in danger of “bail-in”.

This model would be very similar to the way post offices were the first branches of the original Commonwealth Bank when it started in 1912, but it would be permanent. The model would ensure banking services to all communities, and the ongoing economic viability of Australia Post’s branch network.

Maintain a cash payments system—Australia’s banks continue to shut down branches and rip out ATMs, which has the effect of phasing out cash and trapping people inside the banking system.

A June 2019 Reserve Bank of Australia paper on cash accessibility noted that “Australia Post’s Bank@Post service is the only in-person banking facility within a reasonable distance for many Australians living in regional or remote areas”.

Community investment—The postal bank would make loans to individuals and businesses in the community, assessed on their merits based on good lending standards.

Loans would not be assessed on whether they maximise the bank’s profit, which is the culture that has motivated private banks to chase reckless mortgage lending. The postal bank would not engage in derivatives trading or other forms of speculation.

A national development and infrastructure bank could then put those funds to work in the development of infra-structure and industries that Australia needs for productive economic growth and prosperity.

Australians who deposit their savings in the national post office bank would therefore know that not only are their savings safe, but they are being used for the economic development of Australia.

Address the broken regulatory system—Australia has weak and ineffective regulators because that is what the banks want, and it has earnt Australia a shameful reputation as a paradise for white collar criminals.

A public banking alternative would force the private banks to compete on all fronts and lift their game, thereby helping to raise banking standards.

If the private banks persist with ripping off and exploiting customers to maximise their profits, more and more Australians will turn to the public banking option which, while it would make modest profits, would exist primarily to provide a service.