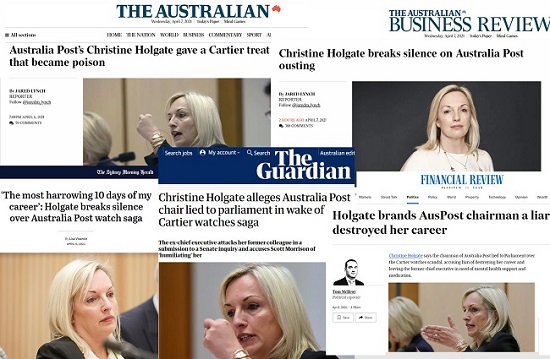 Stood-down Australia Post CEO Christine Holgate has never spoken to the media, but now she has made an explosive 150- page submission to the Senate Environment and Communications Committee’s inquiry into her removal. The Committee published the submission yesterday, generating a flurry of sensational press coverage based on her powerfully written Executive Summary. (p. 3)

“The experience the Chair of Australia Post and others put me through—which continues—should never be allowed to happen again, not just at Australia Post, but in any organisation, to any person, in any role”, Christine Holgate wrote. “The Chair of Australia Post not only unlawfully stood me down, he lied repeatedly to the Australian people and to their Parliament about his actions. Time after time he has made statements that I had agreed to stand down when I had done no such thing. The evidence in this submission is irrefutable and I urge you to read it in full.”

Christine Holgate’s submission puts her on a collision course with Australia Post at a Senate hearing in Canberra on 13 April. Australia Post’s submission, also published yesterday, claims a completely different version of the events surrounding her standing down on 22 October 2020. It claims Chairman Lucio Di Bartolomeo spoke to Christine Holgate a number of times that afternoon and secured her agreement to stand aside, while she is emphatic that she never agreed to stand aside and moreover, she did not speak to the Chair at any time on that afternoon. Ominously for Australia Post however, its version of events hangs entirely on the word of the Chair, who has already been shown to have lied to the Senate that he hadn’t seen a Boston Consulting Group report on Australia Post that the government is hiding from Parliament.

The submission is exhaustively documented, and as well as detailing the circumstances of her unlawful removal and the specific instances of Australia Post Chair Lucio Di Bartolomeo lying, Christine Holgate tells the story of the 2018 banking deal which saved Australia Post, for which she rewarded four executives with Cartier watches only to be ambushed in Parliament two years later. She expresses her extreme disappointment that at no time on the day she was ambushed, or in the days afterwards, did anybody in either the government or Australia Post attempt to explain the banking deal as the context for the watches. Instead, they all let the media report the watches as if they were typical of extravagance at Australia Post. From this lack of basic support Christine Holgate got the message they wanted her out, and in a very demoralised state she offered her resignation on 2 November; this wasn’t finalised, however, and she has since rescinded the offer, buoyed by the support of the Licensed Post Office Group, the Citizens Party, and Bob Katter MP, who did inform the public of the banking deal, which has turned around public opinion.

The $220 million banking deal, which saved postal banking services for 1,500 rural communities that don’t have bank branches, was “a landmark agreement and gave the largest capital investment into the Post Office network in our history”, Christine Holgate writes, adding: “The Treasurer Josh Frydenberg played a significant role supporting the agreement and this was acknowledged in the announcement with CBA.”

Yet today, in an act of stunning political cowardice, Josh Frydenberg tucked his tail between his legs and claimed that the appalling treatment Christine Holgate endured was “appropriate”. This is the person who knows better than anyone else in Parliament about the banking deal for which the watches were awarded, but at no time has he spoken up. Instead, he’s been silent, frozen by his cowardice, as his colleagues Scott Morrison, Mathias Cormann, Paul Fletcher and Simon Birmingham, threw her under a bus.

The truth is coming out!