Australian “ethics” professor Clive Hamilton popularised anti-China paranoia through his two books, Silent Invasion and Hidden Hand. To support many of the claims in these books he resorts to manipulated quotes and misrepresented statistics, which can only be described as intentionally deceitful.

In a 7 August 2020 opinion in Pearls and Irritations, Professor Jocelyn Chey, a former senior diplomat specialising in Australia-China relations, declared Hamilton’s second antiChina book, Hidden Hand (2020), co-authored with German Mareike Ohlberg, a “diatribe”. “We do not need this hysteria”, she said, referring to Hamilton’s “emotive language” and “rather basic lack of understanding of China’s political structures”. Chey believes Hidden Hand “should not be taken seriously because it is biased, and therefore bad scholarship.” 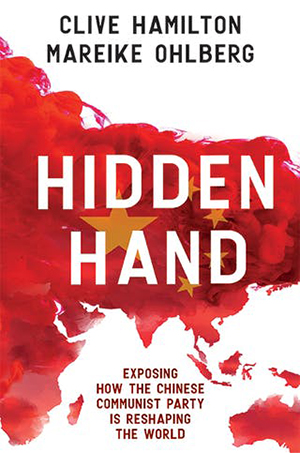 Hamilton’s anti-China “evidence” falls apart under scrutiny. Hidden Hand describes increased cyberattacks on “the medical records of current and future political, military and public service leaders”. It alleges these medical records “are likely now in the hands of China’s intelligence services and could be used to identify their weaknesses to be exploited for influence or for blackmail”. (Emphasis added.)

Yet the references Hamilton provides in Hidden Hand do not support these scary allegations. He claimed: “In August 2018 it was reported that 1.5 million medical records had been stolen from the Singapore government’s health database, in an attack experts believe came from state-based hackers in China.” Not true—the reference makes no mention of China, and these were non-medical records. Another claim: “The Singapore theft followed a massive hack in the USA in 2014 that sucked up the records of 4.5 million patients across 206 hospitals, and another in 2015 that saw up to 80 million records stolen from a health insurer.” Again, this is a misrepresentation—the reference shows these were non-medical records.

He added: “The year 2014 also saw the theft of 4.5 million health records from a Tennessee-based hospital chain, in an attack again attributed by experts to state-backed hackers in China.” The reference also shows these were non-medical records; moreover, Hamilton was boosting his numbers by rewording the previously-mentioned 2014 hack and pretending this was a separate incident.

Finally, he claimed: “That same year, the medical records of an unspecified number of Australian soldiers, including special forces operating overseas, were sent to China by a health contractor that also has facilities in Guangdong.” According to the reference, the medical records were sent to other countries as well as China; such details don’t assist Hamilton’s narrative, however. 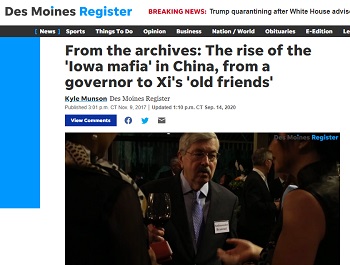 When he was a government official in 1985, China’s President Xi Jinping travelled with a trade delegation to the US state of Iowa visiting farmers. Hamilton sneers: “Xi came back in 2012, [and] praised his ‘old friends’ in Iowa for their ‘agrarian common sense, family values and hospitality’. Having built on these early links, a network of prominent [Iowan] businessmen refer to themselves in Beijing as the ‘Iowa mafia’. They are backing Xi’s Belt and Road as a way of getting more Chinese investment in Iowa.”

As the 9 November 2017 Des Moines Register reveals, however, the term “Iowa mafia” is actually only a friendly joke. The Iowa-China relationship has been built over decades, through “modest citizen diplomacy by farmers”. Although the 1985 Xi visit to Iowa is now historic, at the time it was “just one of many examples of how the two cultures ever so gradually intertwined at a grassroots level”. The Register reported that American businessmen wanted to participate in the “huge opportunity” of the One Belt One Road initiative, “in which China plans to spend billions of dollars on international infrastructure to develop modern trade routes”. Hamilton has intentionally twisted a decadeslong relationship of mutual respect and peaceful trade into an object of suspicion and derision.

Hamilton claims the Chinese government “undertakes extensive intelligence-gathering and espionage”, citing estimates that the Chinese military has “30,000-50,000 plants in organisations around the world”. Bizarrely, Hamilton admits these figures aren’t supported, but cites them anyway! The reference for this alarming claim is a 2016 booklet, China’s Espionage Dynasty, co-authored by “cyber security expert” James Scott, the co-founder of a Washington DC think tank called the Institute for Critical Infrastructure Technology (ICIT). The impressive name belies the farcical truth. In 2018, Scott was exposed as a “bogus expert”, outed for running fake social-media campaigns to boost his profile and operating under a false name, whose only “expertise” in cyber security was a series of self-published books on the topic. Today, Scott sells a line of hacker-themed clothing inspired by his now-suspended Twitter handle, but thanks to him thousands of Hamilton’s readers believe Chinese spies have infiltrated everywhere.

Hamilton criticises Michael Schaefer, Germany’s former ambassador to China, for praising “China’s ‘enormous progress’ in social and economic rights” and for arguing that “freedom of expression and freedom of the press ‘hardly play a role’ in countries like China”. Consistent with his pattern, however, Hamilton deliberately cherry-picked from Schaefer’s full interview to imply Schaefer is improperly influenced by Beijing.

Schaefer did indeed praise China’s continuing progress in economic and social rights, noting that in reality, “a full rice bowl, a roof over my head, internal and external security” is more important to people living in poverty than freedom of the press. He was clear, however, that the German government regularly addresses freedom of expression and human rights issues with the Chinese government. Schaefer stated that “internet censorship is certainly not acceptable”, but noted that overall, “China will not be able to prevent the freedom of the network, because China depends on the internet for its further economic development”.

Hamilton deliberately twists any gesture of friendship, respect or mutually beneficial cooperation with China. His poisonous intention is evident: to deceive Australians into a New Cold War with China.