The close of 2020 was awash with articles reporting a speculative frenzy, though none dared fathom the trend as a sign of good economic times ahead. The gulf between investors forced into higherrisk investments to make money while others flee into negative-bearing treasuries—on which they are assured of losing money—in order to feel safe, says it all.

Instead of continuing to inject financial bailouts into the banking sector, 2021 must be the year in which investment into the real economy is restored. Governments must direct investment into industry via credit creation using a national bank, and private investment can be channelled into the economy via public banking with citizens putting their savings into a post office bank, as occurred under the model of the famous Japan Post Bank. (“Learn from New Zealand and Japan on postal banking”, AAS, 11 Nov. 2020.)

On 20 December Bloomberg reported “A speculative frenzy is sweeping Wall Street and world markets”, noting that global stock markets had swelled to over US$100 trillion, setting regular new records; Initial Public Offerings (IPOs) boasted the highest returns since the dot-com bubble and totalled US$175 billion for 2020, with smaller European markets also multiplying fast; options (derivatives) markets set daily trading records on US exchanges, sweeping up many mum-and-dad investors; and new records were reached on mergers and deals.

Pointing to various asset bubbles, senior investment reporter for US News John Divine noted 18 December that “Amid economic carnage, low interest rates are stimulating demand for assets across the board.” Veteran market moguls Carl Icahn and Jeremy Grantham, according to Fortune.com on 9 January, both warned the stock market bubble is ready to burst. Speaking to the American Economics Association on 4 January, Bank of England Governor during the 2008 crisis, Mervyn King, warned of the “risk of another financial crisis”. 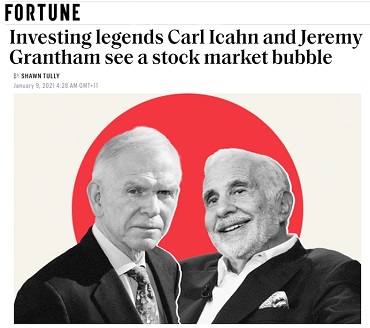 The “new roaring 20s”, wrote Pam and Russ Martens for Wall Street On Parade (WSOP) on 24 December 2020, was created by a lack of bank regulation. Already wishywashy regulators were “castrated” under the Trump administration, which staffed them with former bankers, expanding practices that inflated existing bubbles, including: banks trading their own stock in “dark pools”; unregulated derivatives speculation fed by bailout money; and publicly traded corporations buying back their own stocks. So lax are the watchdogs that JPMorgan Chase was able to rack up five felony counts in six years!

It would have been very different if robust regulation had restricted such activity. WSOP cited then-Vice Chair of the Federal Deposit Insurance Corporation Thomas Hoenig, in a July 2017 letter to the US Senate Banking Committee, specifying that under the capital rules then in effect, the 2017 share buybacks alone could have otherwise “increase[d] small business loans by three quarters of a trillion dollars or mortgage loans by almost one and a half trillion dollars.”

Squeezing off credit to business has continued despite record injections of bailout money into banks over the course of the year. Heading into 2021, US and European central banks announced bottomless extensions of their quantitative easing programs. The Fed Open Market Committee announced in December it would continue at least US$120 billion a month QE indefinitely. The size of the six largest Wall Street banks increased by 15 per cent since the latest easing program began on 4 October 2019, while bank credit to the economy from the entire US banking system dropped by 5 per cent during 2020. The monetary policy arsenal, including negative interest rates, was designed to prop up asset bubbles, not fix the economy. This must change.

While negative rates are supposed to stimulate more lending, in reality they invert the usual banking processes and are crippling banks, and forcing many smaller community banks to shut up shop. (“Negative interest rates bad for savers, economy and banks!”, AAS, 18 Sept. 2019.) More bonds, both government and corporate, are joining the negative trend. A Bloomberg-Barclays index showed in mid-December that the amount of negative-yielding debt had risen to a record high of US$18.04 trillion, with around US$1 trillion worth of bonds turning negative just in the previous week. Nearly 30 per cent of the world’s investment-grade debt now trades in the negative domain, reported Bloomberg. In December 2019, Australian treasury notes sold at a negative yield for the first time, with over $500 million of federal government debt picked up at minus 0.01 per cent.

China is bucking this trend with an investment policy favouring the real economy. In November 2019, vice governor of the People’s Bank of China, Liu Guoqiang, announced the bank would continue to “enhance financial support for the real economy”, as Xinhua put it, rather than the non-productive sector. Utilising its unique financial architecture which combines the free market with government direction of industry and restrictions on speculation, China has channelled trillions of dollars into physical infrastructure since the 2008 financial crisis. It has urged other nations to do the same by joining its plan to develop and connect nations under the Belt and Road Initiative (BRI).

In a 2 January interview with Xinhua and China Media Group, State Councillor and Foreign Minister Wang Yi reported: “In the first three quarters of 2020, China’s non-financial direct investment in countries along the Belt and Road reached 13 billion US dollars, an increase of nearly 30 per cent year-on-year. Most BRI projects have continued uninterrupted and without layoffs, and a number of new projects have been launched as scheduled.” He pledged to boost global recovery by tapping into Chinese growth in 2021, sharing with the world China’s “development dividends”. While travelling in Africa, Wang announced two more African nations joined the BRI, the Democratic Republic of Congo and Botswana, bringing the number of African collaborators to 46.

In an interview with CGTN, Wang called for restoration of US-China relations in order to “to establish a model of coexistence that benefits both countries and the world, and open up new development prospects”. On 10 January China released a new white paper on International Development Cooperation in the New Era.

As part of its expansion of cooperation, in November 2020 China signed onto the Regional Comprehensive Economic Partnership (RCEP) and on 30 December negotiations concluded on the China-EU investment agreement initiated in 2013. Chinese trade with Europe increased by 3.5 per cent in 2020, with more than 1,000 freight trains making the journey every month.

At home, a plan to expand agricultural output every year was announced at the 28-29 December Central Economic Conference on Rural Work. Work on the space program continues apace while construction of a new communications network based on the laws of quantum physics is under way. China’s latest Five-Year Plan, released late last year, not only emphasises innovation and “science drivers” to push the economy, but will aim to allocate 10 per cent of GDP (!) to “cultural industry”, including the arts, music and aesthetic education, as a further economic driver.