On 28 June high-profile environmental activist Michael Shellenberger made a shocking confession: “On behalf of environmentalists everywhere, I would like to formally apologise for the climate scare we created over the last 30 years. Climate change is happening. It’s just not the end of the world. It’s not even our most serious environmental problem.” Shellenberger was named a “Hero of the Environment” by Time magazine in 2008 and last year the Intergovernmental Panel on Climate Change (IPCC) invited him to serve as an independent Expert Reviewer of its next Assessment Report.

Given the sensitive politics around “climate science”, it’s not certain whether Schellenberger’s IPCC invitation will remain open. But any establishment move to suppress Schellenberger won’t stop enquiring minds searching for the truth. Heavy-handed tactics and fearmongering tend to backfire! Forbes initially published Shellenberger’s confession and then censored it because it did not meet “strict editorial guidelines”. This only led to it going viral online, including an archived copy of the original Forbes article. And the Australian newspaper ended up publishing it on 1 July.

On Sky News on 1 July Shellenberger described the “anti-human Malthusian tradition” that took over the conservation movement in the 1970s. He explained that under Malthusian environmentalist doctrine, the World Bank is now “funding programs to make poverty sustainable rather than to make poverty history”. The Malthusian tradition to which Shellenberger refers arises from Parson Thomas Malthus, chief economist of the British East India Company. In his infamous 1798 Essay on the Principle of Population Malthus advocated ways to manage the alleged overpopulation problem: “Instead of recommending cleanliness to the poor, we should encourage contrary habits. In our towns we should make the streets narrower, crowd more people into houses, and court the return of the plague. In the country we should build our villages near stagnant pools, and particularly encourage settlements in all marshy and unwholesome situations.”

While many scientists challenge climate alarmism, their voices are usually suppressed by establishment figures, many of whom know little about science. It’s the Malthusian tradition and the City of London financial oligarchy behind climate alarmism which has alerted many nominal left-wing activists to the anti-human agenda in climate alarmism. Greepeace co-founder Dr Patrick Moore, for example, publicly debated in opposition to climate alarmist Dr Michael Mann in June 2018. Paul Driessen, a former member of the Sierra Club and Zero Population Growth, is now an outspoken author against “fake climate science and scientists”. Driessen’s book, Eco-Imperialism: Green Power Black Death, received a glowing review from Dr Moore: “The environmental movement I helped found has lost its objectivity, morality and humanity. The pain and suffering it is inflicting on families in developing countries must no longer be tolerated. Eco-Imperialism is the first book I’ve seen that tells the truth and lays it on the line. It’s a must-read for anyone who cares about people, progress and our planet.”

Shellenberger explained how he came to speak out: “I remained quiet about the climate disinformation campaign because I was afraid of losing friends and funding. The few times I summoned the courage to defend climate science from those who misrepresent it I suffered harsh consequences. And so I mostly stood by and did next to nothing as my fellow environmentalists terrified the public.” But the escalating climate alarmism by powerful interests became too much and Shellenberger was inspired to write a book, Apocalypse Never: Why Environmental Alarmism Hurts Us All, which he has just released along with his confession. 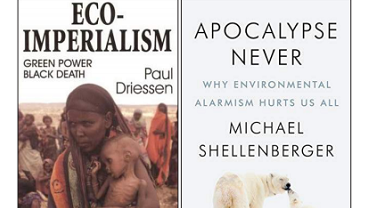 Shellenberger’s 400-page book is based on two decades of research and three decades of environmental activism. He explains his shift from advocating “renewables” to the Obama administration to supporting nuclear power. In his journey he made some big discoveries, many of which were very unsettling: “Once you realise just how badly misinformed we have been, often by people with plainly unsavoury or unhealthy motivations, it is hard not to feel duped.”

“Nations are reverting openly to self-interest and away from Malthusianism and neoliberalism, which is good for nuclear and bad for renewables”, writes Shellenberger. “The evidence is overwhelming that our high-energy civilisation is better for people and nature than the low-energy civilisation that climate alarmists would return us to.” It’s this voice of reason which must advance to benefit the economy and the environment.