EU sees the light on nuclear energy; Australia still in the dark

The European Union has designated nuclear power a source of “green” energy under its plans to achieve so-called climate neutrality (or “net-zero emissions”) by 2050. The move has outraged die-hard environmentalist ideologues, but is in keeping with the growing realisation by many governments and intelligent conservationists that it is not feasible to run a modern industrial economy on intermittent “renewable” power sources. With China having just connected the world’s first modular high-temperature gas-cooled reactor (MHTGR) to its power grid, and plans under way to commercialise similar designs in several other countries, a renaissance of nuclear power seems to be just around the corner. But not in Australia. In the country with the world’s largest uranium reserves, neither major political party is willing to rescind an unscientific and politically motivated ban on the safest1 and most efficient source of electricity currently available to mankind. 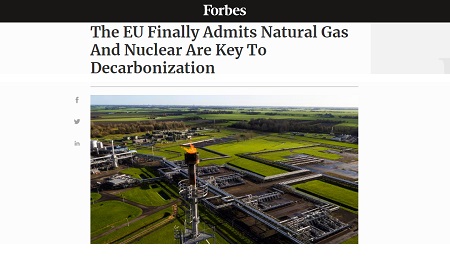 On 1 January the European Commission (EC), the executive government of the EU, released a statement announcing it had begun consultations with member states to add “certain nuclear and gas activities” to its so-called EU Taxonomy, which “guides and mobilises private investment in activities that are needed to achieve climate neutrality in the next 30 years.” Both nuclear and gas were described as “transition” fuels on the path towards a “predominantly renewable-based future”. Gas obviously fits that bill, since for those concerned about such things, modern gas-fired generators emit only half as much carbon dioxide per unit of electric output as the most efficient coal-fired plant. Nuclear, on the other hand, emits no CO2 at all, making it a mystery why having gone to the trouble of building it, one would then downgrade to diffuse and intermittent solar- and wind-powered “renewables” (p. 7).

The EC appears to have come to the same realisation. On 2 February it announced that gas and nuclear projects would be deemed consistent with EU climate goals, on condition “for nuclear, that it fulfils nuclear and environmental safety requirements; and for gas, that it contributes to the transition from coal to renewables.” (Emphasis added.) Gas plants will be subject to strict CO2 emissions limits, and must switch to “low-carbon” or “renewable” gas (e.g. hydrogen) by 2035, while countries that use nuclear must have plans (and funding) in place to deal with spent fuel. The BBC reported 3 February that the EC’s decision “has divided the EU, and been fiercely opposed by some members”, notably Austria, which has threatened legal action at the European Court of Justice. In addition, “the European Parliament and the council of heads of state have four months to consider the suggestion and object to it”, the BBC reported. “The bar is, however, relatively high. In order to block the commission’s proposed plans, either a majority of parliament members or at least 20 of the 27 national leaders are needed.” German state broadcaster Deutsche Welle reported that “France, which derives about 70 per cent of its electricity from nuclear plants, is—unsurprisingly—heading up the pro-nuclear fraction”, which includes Poland, Hungary, the Czech Republic, Bulgaria, Slovakia and Finland. Germany remains anti-nuclear (it is set to shut down the last of its nuclear plants by the end of this year), even as it purchases nuclear-generated electricity from France to make up its own shortfalls, but is in favour of gas.

Writing 24 January in the South China Morning Post, veteran Asia economics correspondent Anthony Rowley catalogued what he called “the beginning of a renaissance of nuclear energy to help save the world from the threatened dark age of climate change”. Since the November 2021 COP26 climate summit in Glasgow, he wrote, “there has been a dawning realisation that the world cannot shed its dependence on the fossil fuels of coal, oil and gas while continuing to attain the growth demanded by its advanced and emerging economies … without [using] nuclear power to achieve global equitable economic growth targets and also meet emission control targets”.

In Japan, which is gradually re-starting the nuclear reactors it shut down after the tsunami-induced Fukushima meltdown in 2011 and building two new ones, “debate has shifted to small modular reactors of the type pioneered in China and which are being researched in the US, Britain and Japan”, Rowley reported. China brought its first MHTGR online last December. “China Huaneng Group’s 200-megawatt unit 1 reactor [of a planned 18-reactor complex] at Shidaowan feeds power to the grid in Shandong province”, Rowley wrote. “It is the world’s first ‘pebble-bed’ modular high-temperature gas-cooled reactor, using helium instead of water to drive turbines.” MHTGRs require little to no water for cooling, allowing them to be installed in areas unsuitable for large conventional reactors. The pebble bed design is especially advantageous in that even if cooling fails, its inbuilt passive safety systems prevent the reactor from ever getting hot enough to melt its self-contained fuel capsules (the eponymous “pebbles”), making it impossible to melt down.

As well as cutting-edge technology, China will soon lead the world in sheer volume of nuclear power. Already, according to the World Nuclear Association, China has 53 operating reactors (versus the USA’s 93), with another 18 under construction. At COP26 the Chinese government announced plans to build “at least 150 new reactors in the next 15 years, more than the rest of the world has built in the past 35”, Bloomberg reported at the time.

Sufficient uranium exists that even outdated “conventional” reactors, let alone highly efficient MHTGRs, could supply the world’s projected power needs for several thousand years. But there are also “breeder” reactors available that produce more nuclear fuel than they consume. It has been calculated2 that “all the world’s energy requirements for the remaining 5×109 yr [i.e. five billion years] of existence of life on Earth could be provided by breeder reactors without the cost of electricity rising by as much as 1 per cent due to fuel costs.

This is consistent with the definition of a ‘renewable’ energy source in the sense in which that term is generally used.” Breeder reactors can also be used to reprocess “spent” fuel from other reactor types, making long-term storage of radioactive waste a non-issue.

Australia has nearly one third of the world’s known uranium reserves and some of the largest known deposits of thorium, another fissionable heavy metal which “burns” cleaner than uranium. We also have all the iron and coal (for steel-making), lime (for cement), rare earth metals (for specialty steels and alloys), and everything else we need to establish a nuclear industry. The shifting mood around the world is increasingly showing up Australia’s prohibition of nuclear power for the absurdity it is. The good news, as mining lobby the Minerals Council of Australia noted in a 2017 discussion paper, is that “the nuclear ban can be reversed with a single amendment to the Environment Protection and Biodiversity Conservation Act 1999 (Commonwealth). The removal of four words—‘a nuclear power plant’—in Section 140A(1) (b) would allow nuclear industries to be considered for development in Australia.” The previously anti-nuclear EU was shocked to its senses by an energy supply crisis of its own making that caused widespread blackouts during a particularly harsh winter. What will it take to wake Australia?

1. Ninety people died in or as a result of the 1986 meltdown in Chernobyl, USSR (of a mismanaged and poorly designed reactor that would never even have been approved for construction elsewhere). Otherwise, there have been zero deaths from nuclear accidents worldwide, ever, compared to 150 for wind and 440 for solar.

Energy & Resources
[ Back to top ]