In the eye of the economic hurricane 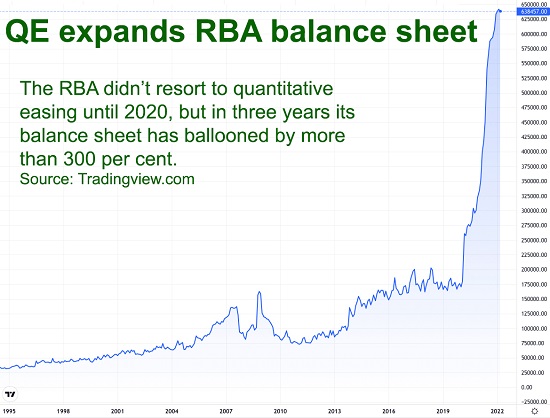 “You’d better brace yourself”, JPMorgan Chase CEO Jamie Dimon told analysts on 1 June. “That hurricane is right out there, down the road, coming our way.”

Dimon was expressing his fear about the consequences of so-called Quantitative Tightening (QT), the reduction of the trillions in free money the US Federal Reserve and other central banks pumped into the world’s banks since the 2008 global financial crisis. He also fears oil spiking to US$175 per barrel.

“We’ve never had QT like this, so you’re looking at something you could be writing history books on for 50 years”, Dimon said. But central banks “don’t have a choice because there’s too much liquidity in the system. They have to remove some of the liquidity to stop the speculation, reduce home prices and stuff like that.”

In 1933, US President Franklin Roosevelt wrested the power away from the bankers who caused the Depression, with farreaching financial policy reforms including the Glass-Steagall Act 1933, which cut Wall Street speculators off from everyday people’s savings deposits by separating commercial banks from investment banks. “Practices of the unscrupulous money changers stand indicted in the court of public opinion, rejected by the hearts and minds of men”, FDR declared in his first inaugural address. “The money changers have fled from their high seats in the temple of our civilisation.”

In 2008-09, however, the bankers dictated the response, blocking a return to the Glass-Steagall Act that had been repealed in 1999, and cooking up schemes like “bail-in”—seizing customer deposits to prop up failing banks—instead. The reality that had caused the crisis, namely the massive global bubble of unpayable debt and derivatives contracts, was never solved, but was papered over by central bank Quantitative Easing (QE). In a new book, The Lords of Easy Money: How the Federal Reserve Broke the American Economy, journalist Christopher Leonard tracks the extent of QE money printing on the Fed’s balance sheet, which has grown almost tenfold, or 1,000 per cent, since September 2008—from $906 billion, to $8.9 trillion in March 2022 (p. 11). The Reserve Bank of Australia was late to QE, so from 2008 to 2019 its balance sheet grew modestly from $101.5 billion to $182 billion; however, since it started QE in earnest in 2020, the RBA’s balance sheet has ballooned to $609 billion.

All this liquidity filled the holes in the system, but none of it was invested productively, which is why Jamie Dimon is now saying that central banks have no choice but to remove it. It was always a catch-22: either the system would crash under the unpayable debt burden, or it would crash under the inflation caused by QE. Either way it was always going to reach a point where nothing could stop it crashing, and every sign indicates we may have now reached that point.

The policy solutions to this crisis are the same ones that should have been implemented in 2008-09: Glass-Steagall to protect innocent bank customers and the real economy; allow the bubbles in real estate and derivatives to crash, and put the financial institutions that need to be saved through government-directed bankruptcy reorganisation; and establish national banks to recapitalise the economy through investments in infrastructure and productive industries.

These are the policy solutions for which the Citizens Party has been fighting all along. We know they will work because of their success in the past, and because some nations, led by China, did respond to the 2008 crisis with public investment in infrastructure and industries, with spectacular economic results. Now there’s no alternative.

Financial Crisis
[ Back to top ]