Government has important role in insurance

On 4 May the Morrison Government announced a “reinsurance pool” backed by a $10 billion government guarantee in a scheme purportedly designed to provide more affordable access to insurance for Northern Australians. Whether this goal is met remains to be seen, but with insurance costs skyrocketing it’s clear that government needed to step in to address a market failure which has punished far too many Australians. The scheme covers cyclone and related flood damage, and the government claims it will reduce insurance premiums across Northern Australia by over $1.5 billion for households, strata and small businesses over 10 years. Insurance industry leaders regularly talk up forecasts of “more frequent and intense weather events” which have no scientific basis, but what is their motivation other than profit? Hopefully, the government’s $10 billion intervention won’t end up being a taxpayer-funded corporate insurance company bailout, but a government role in insurance is certainly necessary—and Queensland’s previously successful State Government Insurance Office shows what is possible.

The Morrison Government announced the reinsurance pool in a 4 May media release titled “More Affordable Access to Insurance for Northern Australians”. The Budget Paper No. 2 (2021-22) identifies that $2.4 million is allocated for a taskforce to “consult industry and experts on the design and implementation of the reinsurance pool for cyclone and related flood damage across Australia”. So far, this is the only funding allocated for the scheme, which is proposed to cover damage from 1 July 2022. In addition, the federal budget allocates $40.3 million for the North Queensland Strata Title Resilience Pilot Program, a pilot program implemented with the Queensland Government to fund cyclone risk mitigation works for strata title (i.e. highrise) properties in North Queensland.

All of this is unnecessary—history tells us what to do. Queensland’s State Government Insurance Office (SGIO) for decades provided affordable insurance. The Queensland state government’s Insurance Act of 1916 led to the formation of the SGIO, which came into effect on 1 February 1917. The Insurance Act empowered an Insurance Commissioner to carry on insurance business and ensured that he “shall not act as director or auditor or in any other capacity take part in the management of any bank, joint stock company, or other financial institution, or of any trade or business, or acquire or hold directly or indirectly any shares in any insurance company”. This important provision in the legislation ensured conflicts of interest and profiteering would not take place. The Daily Standard (Brisbane) reported 30 January 1917 that “[i] n spite of the opposition of the Legislative Council and other strong-holds of Conservatism, the Labour Government is accomplishing great reductions in the cost of fire and accident insurance to employers and the general community”. 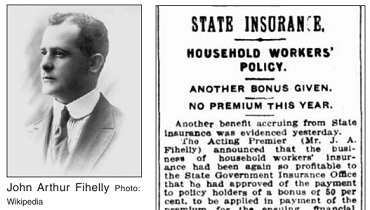 Queensland Assistant Minister for Justice John Arthur Fihelly (1882–1945) was instrumental in drafting and piloting the Insurance Act through the parliament. In a 2 August 1917 statement printed in several Queensland newspapers, Fihelly said it “was somewhat of an experiment to increase the benefit by, approximately, seventy-five per cent without charging the employer a higher rate…. The Government is well pleased with the position, and premium payers will, no doubt, have undergone the novel experience of being told, firstly, that greatly increased benefits under the Workers’ Compensation Act would not cost them a penny extra, and, secondly, that not only would it cost nothing more, but that £18,500 too much had been paid. This advertisement for state insurance is a splendid one, and I fancy it is the first instance in the history of accident assurance where the benefits have been amplified and the premiums at the same time cut down.”

The SGIO commenced the business of life insurance in January 1918 with premiums accepted monthly, quarterly, halfyearly, and yearly. On 16 March 1920, Fihelly announced that the business of the household workers’ insurance was so profitable to the SGIO that he approved a payment to the policy holders of a bonus of 50 per cent, to be applied in the payment of premiums for the ensuing financial year. Fihelly, then acting Premier, added that he did not think there was any private insurance company which would deal so liberally with policy holders as to give two years cover for one year’s premium—no matter what surplus had resulted from its business.

Unfortunately, after decades of serving Queenslanders, SGIO became one of many victims of the wave of neoliberal privatisation and deregulation that swept Australia (and the world) in the 1980s. SGIO was merged into Suncorp in 1986 in preparation for privatisation. In 1996 Suncorp merged with Metway Bank. The Queensland government was the largest shareholder of the new group with a 68 per cent holding. By the following year, the government’s interest in the company was reduced to 4 per cent. In 2000 the government announced a total sell-down of its Suncorp Metway shareholding.

With a government insurance office, private insurers would not get away with creating pretexts for exorbitant premiums and denying people insurance. That said, the skyrocketing insurance premiums in Northern Australia cannot be justified by alarmist climate-change projections. The Bureau of Meteorology officially states that “the number and intensity of tropical cyclones are subject to the sources of uncertainty inherent in climate change projections”, and cyclone frequency and intensity data show no alarming trends. Regulations prohibiting building on flood plains and major water infrastructure would be the best insurance policy against flood damage. The Bradfield Scheme, among other projects, could divert flood waters for economic benefit. And government-owned insurance offices are a proven national asset which are desperately needed again.