In what might have been the most dramatic day of parliamentary hearings in Australian history, which will long be remembered, ousted Australia Post CEO Christine Holgate was finally able to speak publicly, revealing the sordid details of how she was bullied out of her job. 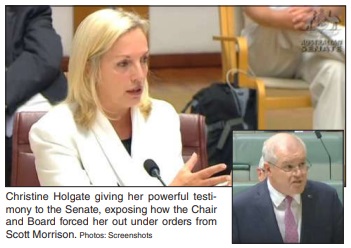 Holgate’s testimony to the Senate fully implicated Prime Minister Scott Morrison and the liberal-stacked Australia Post board, which treated her and her associates “like common criminals” and without any recourse to procedural fairness or natural justice, threw her under the bus.

Powerful factions among the country’s political elite and establishment media are moving against Morrison. In the hearing itself, Senators from all parties were aghast at Morrison’s actions, as was the media. It is a stunning turnaround— for an issue that initially drew little attention and only came to a parliamentary hearing due to the intervention of the Citizens Party and collaborators—that the two 24-hour news channels, ABC-24 and Sky News, spent the entire morning and much of the afternoon in a live cross to the hearing, and that wall-to-wall coverage ensued in evening and morning news coverage, both TV and print. The political sea change was evident even from ALP Senator Kimberley Kitching, who had launched the Cartier watch controversy against Holgate, but who felt the need to turn up to the hearing wearing “suffragette” white in solidarity with her. Kitching couldn’t help expose her true intentions, however, by launching a new attack in the course of proceedings against the one agency which has held her to account for her catalytic role in the ambush of Holgate—the Citizens Party—and attempting to cast aspersion on our role in assisting her.

Kitching confirmed that she represents the political faction (transcending political lines) that is terrified of what Holgate brought to Australia Post. Having forced the banks to pay for services they once got for free with her historic Bank@Post deal (for which the watches were awarded), Holgate was also known to support a public banking role for Australia Post and to oppose vehemently the attempted slashing of services and move towards privatisation signalled in the government’s Boston Consulting Group review of the postal agency. On this count she was decidedly unpopular among the AP board, she recounted.

ALP Senator Kim Carr was able to reveal, for the first time, some of the implications of the secret BCG review, and the devastating impact its recommendations would have on postal and banking services, calling it a “blueprint for the privatisation of Australia Post”. Holgate reviewed the consequences it would have for the nation, pointing to the fact that her Bank@Post deal saved 55 per cent of Australians from losing all access to banking services.

Holgate also revealed the role of AP board member and Liberal party honcho Tony Nutt in her illegal dismissal, following the PM’s demand she stand down. While Australia Post Chair Lucio Di Bartolomeo denied the PM had given the order for the board to remove Holgate, breaching formal procedures (“We didn’t take it as a directive”, he said, “but we understood”), Holgate revealed that when she expressed her reluctance to resign, Nutt told her, “Christine, you need to understand it was the prime minister”.

Australia Post’s Monday stunt—announcing a new CEO— displays the same arrogance that raised the watches scandal but has now turned against its purveyors, and which will bring them down. No mere apology would suffice to deal with the underlying problems this saga has identified. There must be a full cleanout of the Australia Post board, with a new board of non-political appointees, including a representative each from the licensed post offices and from Australia Post employees as the Citizens Party and Bob Katter MP demanded on 11 December 2020. The chairman must be sacked, and Holgate must be reinstated in order to clean up the agency and pursue her course to protect and revive Australia Post.