High-speed rail will boost the economy

A macroeconomic assessment of a proposed fast train network in Victoria shows a strong economic case that major infrastructure of this type will pay for itself several times over in increased productivity and output overall. Prepared by the National Institute of Economic and Industry Research (NIEIR), the assessment considered a proposal by Juturna Infrastructure prepared for the City of Greater Geelong. Five existing rail corridors radiating out from Melbourne to Colac, Ballarat, Bendigo, Shepparton and Traralgon would be upgraded for 200 km/h speed. NIEIR estimated the project, with a total capital cost of $70 billion in 2018 prices, would deliver a total increase in Victorian Gross Regional Product (GRP) of $33 billion by 2050 and $44.6 billion by 2060 (2018 prices). 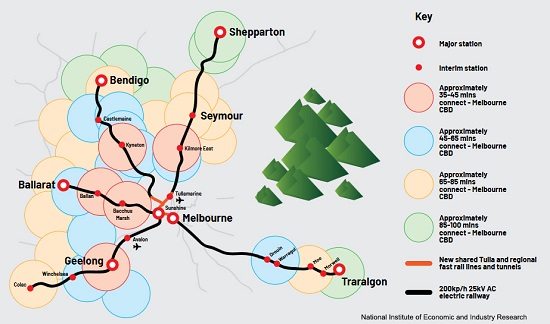 While not a criticism of the project per se, it should be noted this conservative 200 km/h proposal is not even close to China’s Beijing-Shanghai high-speed railway with a 350 km/h service. Nor the Shanghai airport maglev train which reaches 431 km/h. And before long the world can expect to see evacuated tube travel at over 1,000 km/h with systems such as Hyperloop technology now undergoing research and development. So why is Australia still traveling in relative slow motion when extensive macroeconomic analysis shows even modest proposals of 200 km/h have enormous economic benefits? It’s no secret that high-speed rail has played a large role in China’s economic success. Australia must follow this proven path.

Juturna Infrastructure’s fast rail proposal for Victoria is outlined in its May 2019 report titled Stronger, Together: A practical Victorian fast regional commuter rail network, bringing sustainable growth, liveability and opportunity to Melbourne and the regions. This 64-page report documents the proposal for a fully-electrified regional rail program to the five above-mentioned Victorian cities. It would be built in parallel with the Airport Rail Link which the Victorian Government has already committed to with construction scheduled to begin by 2022. Juturna opted for the minimalist model to avoid extra costs of a very-fast train (300 km/h+) which would require land acquisitions to straighten out the track.

The main objective of the project, as NIEIR outlined, “is to upgrade existing regional railway lines to substantially reduce public transport travel times between the regional cities connected to Melbourne by existing lines by upgrading these lines to 200 kilometre per hour electric railways.” The project would generate savings in reduced travel times and vehicle operating costs, along with reducing the enormous personal trauma and financial costs of road accidents. NIEIR estimates that congestion cost benefits alone would likely be “between $60-200 billion in present value terms” from 2020 to 2060.

The stimulation of business activity is where the real gains lie: “A virtuous circle can be set in motion”, NIEIR explains, “by which increases in catchment population increase productivity which increase the availability of good jobs which attract more residents and further increase productivity.” The NIEIR emphasises the economies of agglomeration which are cost savings for businesses in urban settings as more firms in related fields of business cluster together. But without efficient transport infrastructure to connect these businesses with people, these benefits are lost and we experience problems such as high dwelling costs that choke off the supply of labour.

NIEIR reports that thanks to the economies of agglomeration, “productivity along the rail corridors increases rapidly compared to Base case, with an increase after 30 years of around 15 per cent. … Three decades after project completion the GRP of the regional fast rail corridors is projected to have increased by 20 per cent over Base case and by 5 per cent for Victoria as a whole.”

The advantages are many, such as “allowing existing enterprises to expand the geographical market for their products and services; allowing enterprises to enhance productivity by giving them access to a wider labour market catchment and, therefore, increasing their ability to match skills with requirements”. These types of factors are generally recognised in transport evaluation literature, but as NIEIR notes, “what is not fully recognised is the dynamic. There can be no clear-cut picture of the economy ‘before’ the investment, because some of these factors work by anticipation; similarly one cannot take a snapshot of the economy ‘after’ the investment, because other factors work in arrears with different lag patterns. For these reasons, the traditional approach of comparing still pictures of the economy before and after the investment can be very misleading.”

The benefits of nation-building infrastructure require government intervention which will ironically (for free market advocates) ensure the many private businesses in the transport corridors prosper. As the neoliberal economic model of the last generation has failed to deliver necessary infrastructure, government must step in. As NIEIR explains: “Since market mechanisms will not reduce inequality of economic performance between regions, public policy has a key role in reducing inequality of economic performance between regions and by so doing maximising overall economic growth of the nation.” Under the heading, “Financing, funding and delivery”, Juturna Infrastructure’s report states the City of Greater Geelong has “worked in parallel with a highly qualified local, national and international consortium which was developing a preliminary financing and funding model and associated project structures for State-wide fast regional commuter rail.” While the private sector will no doubt look to such infrastructure opportunities for profit, history shows a failure in the public-private partnership (PPP) model which generates outcomes of profit-gouging rather than nation-building. A national infrastructure bank is the way to fund such infrastructure and it would guarantee funding the right project in the long-term national interest, which would also allow the extra investment required to upgrade to genuinely high-speed rail.