Channel 7 News reported on 19 June that the banks are boasting of using the COVID-19 pandemic to ram through their cashless economy agenda. The banks had a five-year plan to reduce cash use, but thanks to coronavirus they achieved their goal in just 10 weeks! 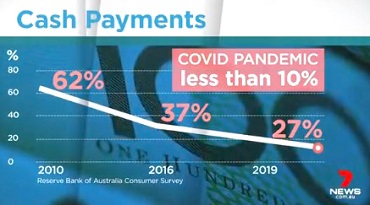 The Big Four banks closed 170 branches during the lockdown months, Channel 7 reported, some of which aren’t expected to reopen. The banks are on track to reduce the number of ATMs from 28,000 nationwide to just 15,000. National Seniors Association spokesman Ian Henschke complained vehemently that elderly and other Australians will be disadvantaged. “We’re talking about hundreds of thousands of people that still want to use cash, that still want to go into a bank”, he said.

While caution and precautions in relation to the pandemic was understandable, there was never any basis for banks and businesses banning cash transactions for health reasons. The health authorities are clear: cash should not be singled out as a risky form of payment, as it is no riskier than other payments. In fact, it is less risky than some—cards and phones routinely carry more germs that cash. The health authorities insist there is no substitute to regularly washing hands, whatever form of payment is used.

The Citizens Party helped lead the fight against the government’s $10,000 cash ban precisely to stop people being trapped in banks and unable to escape sinister policies including bail-in and negative interest rates. The campaign against the cash ban bill fought it to a standstill, and now it is increasingly unlikely that law will go forward. But the banks have cynically seized upon the virus to advance their cashless agenda anyway. As businesses start to open up, the banks are pressuring them to remain cashless permanently. Many small businesses are against this, as they hate having to pay bank charges on electronic transactions, which will only rise as cash is phased out. But larger business and “chain” restaurants, such as Nando’s, are complying and insisting on cashless payment. 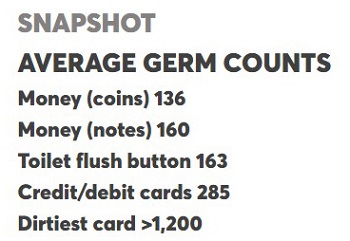 It’s time for Australians to resist this cashless economy agenda and tell the businesses involved we won’t comply. The Citizens Party has provided the evidence that there is no health basis for banning cash:

Here are some suggestions on how to resist this cashless push:

Don’t let the banks get away with this agenda. With some basic acts of resistance, we can persuade businesses not to go along with the banks, and protect our right to use legal tender and not be trapped in banks.