More than a decade of growing support for a postal bank

The policy of establishing a post office “people’s bank”, which was the centrepiece of the Citizens Party’s 2022 federal election campaign, is now a familiar idea to many Australians. The proposal did not start with the Citizens Party, however, but is an idea that has grown in support over more than a decade; the unique contribution of the Citizens Party has been to super-charge that support through its campaigns since 2020. To demonstrate the significant and expanding support for a public postal bank in Australia, the following chronology lists the significant endorsements of the idea that have been expressed since 2009, all of which have helped to shape the public discussion and debate.

In 2009, Australia was ensnared in the fallout of the global financial crash that had erupted in September 2008. While the domestic political narrative maintained that Australia handled the GFC better than any other nation, many Australians were nevertheless worried about the security of their personal investments and savings.

Among their recommendations for what a Financial System Inquiry should consider, these six economists posed the following question:

“Should citizens who feel unsure and unqualified to shop wisely in our financial markets be able to access basic savings, payments, and wealth management products that have been vouchsafed by governments as being safe and professionally managed (e.g., why can’t Australians invest with the Future Fund)? In this regard, is there a role for a publicly-owned entity, akin to KiwiBank in New Zealand, to offer essential services in Australia’s finance sector that leverage off unique government infrastructure (e.g., Australia Post, the tax system, and the government bond market).” (Emphasis added.)

Their call was widely reported, including in The Age, Sydney Morning Herald, and Business Spectator; however, even though the suggestion that the inquiry also consider a public bank was only one of many recommendations, it received the most publicity. On 13 July, one of the economists, Joshua Gans wrote a stunned article in News Ltd’s online magazine The Punch (now defunct), headlined, “Mad furore surrounding the so-called ‘people’s bank’.” Gans referenced the question they had posed, for a financial system inquiry to answer, as to whether there should be a role for a public bank in Australia, and then noted the reaction it had provoked:

“I should stress the word ‘asked’ because this wasn’t a policy proposal but a policy area that might be evaluated. So it was to my surprise that I opened the newspaper (actually I didn’t have to open it was on the front page) to read ‘People’s Bank to break Big Four’ in the Sydney Morning Herald on Wednesday morning. Thereafter, my five co-authors and I spent the day in the midst of a media frenzy about our ‘proposal.’ It was all about the ‘People’s Bank’ but to my knowledge, none of us had ever used that or any other name. To say this was unexpected is an understatement.

“The media and political reaction suggests that this broad idea hit a nerve. While some opposition bordered on the hysterical, across the Tasman where they recently established a government-owned bank, there was a show of support.” 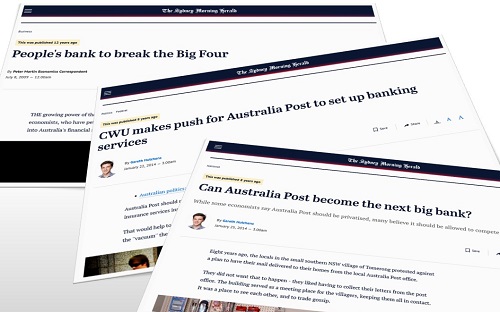 The support Gans referenced from New Zealand came from the head of NZ Post and its Kiwibank, Sam Knowles, who said he believed a Kiwibank-style postal bank would work in Australia, and its business model would create a nationwide challenger to the standard bank model operated by the big Australian banks.

In 2014, the Tony Abbott government established a Commission of Audit to identify services and assets of the Commonwealth government that could be cut from the budget or privatised. Its targets included Australia Post, which the Liberal Party had tried to privatise for decades.

The Communications Workers Union (CWU), a division of the Communications Electrical and Plumbing Union (CEPU) which represents Australia Post workers, made a submission to the Commission of Audit, which included the following proposal:

“Australia Post’s retail network should be given more freedom to leverage off of the trusted icon status, especially in rural and regional areas and move into new services such as banking and financial services, insurance services and communication services. This would enable ‘one stop shopping’ for communities and help fill the vacuums that have been created by the banks and other service withdrawals from regional and rural Australia. Additionally, both individuals and businesses in metropolitan areas would benefit from an added competitor to the big four banks and the obvious reduced cost of banking that would ensue.” (Emphasis added.)

The 25 January 2014 Sydney Morning Herald reported on the CWU’s call, under the headline “Can Australia Post become the next big bank? While some economists say Australia Post should be privatised, many believe it should be allowed to compete with the banks.”

“But would it serve a social purpose?

“University of Queensland economist John Quiggin says it would. ‘Australian banks are highly profitable and have been protected on a too big to fail basis’, he says. ‘Australian banking consumers would benefit from an expansion of competition and from the option of a basic bank with a range of low-cost standard services. This is a challenging idea, but the alternative would be to be a downward spiral as postal services are contracted.’

“Terry Ashcroft, from LPO Group–an organisation looking after the interests of licensed post offices–says it would be a ‘win-win’ for the federal government if Australia Post got its own banking licence. ‘It would become a fifth pillar, and the big banks wouldn’t like it’, he says. ‘But it would generate probably between $1.5 billion and $2 billion net revenue for Australia Post, allowing it to subsidise a lot of its community service obligations … while giving a huge return to the Australian people. The only loser in this would be the major banks.’”

Hutchens added: “Senator Nick Xenophon has supported the idea of Australia Post having its own banking licence for a long time.”

In 2015, Paul Kofman and Carsten Murawski from the Department of Finance at the University of Melbourne proposed a public bank in response to the 2014 Financial System Inquiry chaired by former Commonwealth Bank CEO David Murray. In an article in The Australian Economic Review, published by the Melbourne Institute of Applied Economic and Social Research, entitled, “Does Australia Need a New Banking Model?”, they wrote:

“We suggest a third solution: the establishment of a publicsector institution that provides core financial services, such as payment services, savings accounts, mortgages and other basic forms of credit, to retail customers and small- and mediumsized enterprises. We think of it as a utility that ensures costeffective provision of basic banking services to all Australians.

“The institution would be independent but backed by the Commonwealth Government and funded by (government) equity, deposits and public debt. It would be governed by an independent board, be transparent and accountable to the public.” 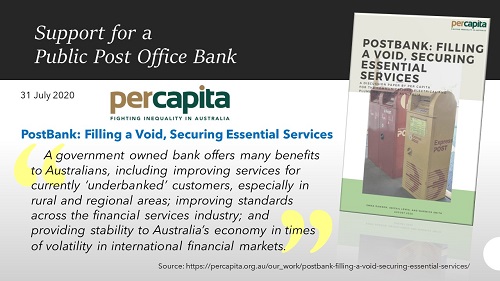 On 31 July 2020, the Labor Party-affiliated think tank Per Capita published an excellent report on a postal bank, commissioned by the CEPU.

“This discussion paper makes the case for the creation of a public bank in Australia by providing Australia Post with an Authorised Deposit-taking Institution (ADI) licence, and moving in time to establishing PostBank as a full national savings and loan bank.

“It looks at examples of banking services offered through postal networks in other countries, and offers suggested business models and funding options for creating a PostBank in Australia, before addressing some of the barriers and challenges to establish such a service.

“The Banking Royal Commission found that many Australians did not have adequate access to basic financial services, and that even those who did are often ill-served by our existing financial institutions.

“Moreover, PostBank could ensure the continuation of postal services in remote and regional communities, and underpin the ongoing viability of Australia Post’s services across Australia.

“A government-owned bank offers many benefits to Australians, including improving services for currently ‘underbanked’ customers, especially in rural and regional areas; improving standards across the financial services industry; and providing stability to Australia’s economy in times of volatility in international financial markets.”

The Per Capita report drew heavily on the Citizens Party’s research in the history of the Commonwealth Bank, Australia’s powerful national bank which also started in post offices in 2012. When the report was released, the ALP’s Shadow Treasurer Jim Chalmers received it favourably, calling it “an important contribution … which the ALP will examine”.

2020: Citizens Party (and other parties)

In November 2020, the Citizens Party put forward its proposal for a Commonwealth Postal Savings Bank, accompanied by draft legislation. Since then, the Citizens Party has received direct feedback from senior politicians in the Labor Party, Liberal Party, National Party, the Greens, Katter’s Australian Party, and One Nation, that they support a postal bank.

In April 2022, the Licensed Post Office (LPO) Group, which represents the interests of Australia’s almost 3,000 small business post office licensees, released an issues list for the federal election, “Protecting the future of your community post office”, which included a call for political parties to commit to: “Establish a Postal Bank to service SMEs [small and medium enterprises] and help sustain the network and fund infrastructure.”

Postal Savings Bank
[ Back to top ]