Several world leaders promoted hydrogen fuel at the 22-23 April Leaders Climate Summit, including US President Joe Biden, who envisaged “green hydrogen plants to forge cleaner steel and cement, and produce clean power”. Prime Minister Scott Morrison said “our ambition is to produce the cheapest clean hydrogen in the world, at $2 per kilogram Australian. Mr President, in the United States you have the Silicon Valley. Here in Australia we are creating our own ‘Hydrogen Valleys’. Where we will transform our transport industries, our mining and resource sectors, our manufacturing, our fuel and energy production.” But whilst UK Prime Minister Boris Johnson discussed “solving the problems of cheap hydrogen delivery”, the physics of the matter will determine the economics. And hydrogen can’t compete with energy-dense nuclear power. 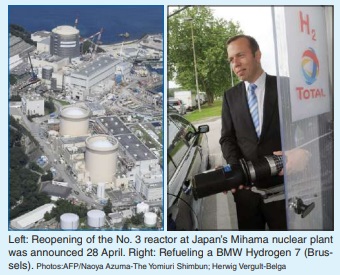 The Australian Government’s May budget is set to allocate $275.5 million towards “clean hydrogen”, which would support hydrogen hubs in regional Australia. The government’s November 2019 National Hydrogen Strategy of the COAG Energy Council to explore Australia’s “clean hydrogen potential” set in motion Morrison’s ambitious “Hydrogen Valleys” proposal. But before anyone has any illusions, it’s important to note that hydrogen is an energy carrier, not an energy source. It requires enormous energy from another source to create it and this storage of energy in hydrogen is “very expensive” as India’s Minister of Power Raj Kumar Singh emphasised at the 31 March IEA-COP26 Net Zero Summit.

Why is hydrogen very expensive? It comes down to the physics which provide significant restraints. While hydrogen contains nearly three times the energy content of petrol per unit mass, at standard temperature and pressure (0 °C and 0.1 MPa), its density is a tiny 89 grams per cubic metre verses 1.3 kg for dry air. It was therefore used in balloons until the 1937 Hindenburg disaster proved the somewhat denser but non-flammable helium was a safer option. Hydrogen can be compressed into high-pressure tanks at 700 bar. This increases hydrogen’s density to nearly 4 kg/m3 . To exist as liquid (LH2 ) hydrogen must be cooled below its critical point of a very cold -239.95 °C but in general LH2 is stored at an even colder -253 °C so high pressure tanks are not required. In the liquid form hydrogen’s density is about 71 kg/m3 compared with petrol that is more than tenfold greater at about 750 kg/m3

Given the low energy density of LH2 , it’s not a suitable fuel for car engines but this didn’t stop BMW in releasing its limited production BMW Hydrogen 7 built in 2005-07. This duel-powered car could operate in petrol and LH2 modes but with a marked difference in fuel consumption: petrol at 13.9 L/100 km and LH2 a whopping 50.0 L/100 km. Not surprisingly such cars are not seen as a serious prospect. But hydrogen can be stored chemically which allows a higher density.

The highest volumetric hydrogen density known today is 150 kg/m3 found in metal hydrides Mg2 FeH6 and Al(BH4 ) 3 . But consider the average Australian car which consumes 11.1 litres of petrol per 100 km. Energetically this corresponds to 2.8 kg of hydrogen per 100 km which seems wonderful at first. A 500-km range tank would only require 14 kg of hydrogen! But the metal hydride storage vessel required would weigh just over a tonne!

In addition to powering vehicles, proponents of the hydrogen economy call to heat homes and industrial spaces as is done with natural gas. But burning hydrogen (in air) is not so environmentally friendly as some imagine. When burning hydrogen in air, a higher proportion of oxygen atoms combine with nitrogen atoms from the air to form NOx pollution. Hydrogen burning in air may produce up to six times higher NOx emissions compared with natural gas. This is because hydrogen gas doesn’t contain carbon atoms which are present in methane, ethane, propane, butane, etc. So in burning hydrogen gas, more of the ferociously active oxygen atoms combine with nitrogen in the air to form highly toxic NOx than occurs when carbon is present to form carbon dioxide, which dissipates within short distances to harmless concentrations.

Advocates of the hydrogen economy typically propose to produce hydrogen with intermittent solar and wind power. This relies on technologies with low energy flux densities which can only increase the cost of power. By contrast, nuclear power utilises high energydense fuels and thus has a smaller environmental footprint than alternatives such as bird-chomping wind turbines. Heat from nuclear reactors can provide hot water for district heating in cities and is an excellent source of process heat for industry. And cheap electricity from nuclear reactors can power efficient reverse cycle heating and air conditioning. Hydrogen cannot compete in this area.

As for transport, emerging vacuum maglev technologies such as Hyperloop can be most efficiently powered with electricity generated with nuclear power. With potential speeds much greater than aeroplanes, vacuum maglev offers a revolutionary advancement in transport. Hydrogen-powered vehicles by contrast would be a regressive step with respect to the energy density of fuels. Therefore, this would be costly even if the hydrogen were produced using nuclear power. High energy-dense nuclear power is the true solution for a strong economy and healthy environment.