The fight for an Australian Republic

Read about Australia's true history, much of which you have probably never heard before! This pamphlet embodies thousands of hours of research in Australia's libraries and archives, and brings back to life the heroic individuals and the mass movements, which the Establishment has paid lying academics to erase from the pages of our history books.

The struggle for a sovereign republic, free from the Crown and the City of London's Money Power, has been the dominant theme of Australian history, from the time the First Fleet delivered its load of Irish, Scottish and English political prisoners to these shores in 1788. 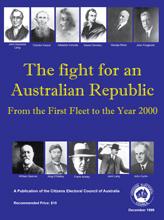 During the mass organising for a republic in the 1840s and 1850s by the greatest republican orator, writer and political organizer this country has ever seen, the Rev. John Dunmore Lang, his plan for a "United States of Australia, the great republic of the Southern Seas" so terrified the British, that it forced them to grant "responsible government" (the beginnings of the Westminster System) to the colonies in the 1850s.

In the 1880s and 1890s, the pro-republican, pro-American mass trade union movement began to organise for a republican nationalist Federation, instead of the "Federation under the Crown," which they were ultimately tricked, cajoled, or bullied into accepting. Even after Federation, the Crown's control over all Australian institutions notwithstanding, Labor's struggle for sovereignty continued in the fight for a National Bank in 1911, through NSW Premier Jack Lang's debt moratorium against British bondholders in 1932 (in order to prioritise payments to starving women and children), through to Gough Whitlam's attempts in the early 1970s to "buy back the farm" from Rio Tinto and others of the Queen's raw materials cartel which controlled our vast riches, for which Whitlam was sacked by the Queen's toady, Sir John Kerr.

The battle continues today, in the fight for a national bank, and to re-assert Australia's sovereignty in the face of ruinous globalisation.