To Stop a Near-term Terror Attack, Read the '28 Pages'!

The "28-pages" is the infamous redacted section of the US Joint Congressional Report into the September 11, 2001 terrorist attack in the USA, which exposed the central role of Saudi Arabia. The Anglo-American war party and its allies in nations like Australia knew the contents of these pages before they launched their war on Iraq, which unleashed chaos across the Middle East.

The pages remained secret for 14 years until a concerted campaign forced them into the public. It is imperative that every citizen read these pages for themselves, because every one of us now lives under the constant threat of terrorism. 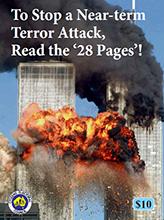 This War on Terrorism is Bogus
Michael Meacher, MP, 2003

The Suppressed ‘28 Pages’
Part Four of the 2002 Report of the U.S. Congressional Joint Inquiry into Intelligence Community Activities before and after the Terrorist Attacks of September 11, 2001

We Can End This Era of Terrorism and War