When mass protests wracked Hong Kong in 2019, sparked by the proposed law allowing extradition to mainland China, anti-China politicians and media around the world cheered them on. They cheered even as the protests descended into endless riots and anarchy, with young, blackclad rioters terrorising the city—firebombing train stations, shops and police stations, bashing anyone who disagreed with them, and in some cases setting them on fire. In an 18 November 2019 article, “Hong Kong mob protesters rule the streets”, a senior correspondent for Rupert Murdoch’s The Australian, Hedley Thomas, broke from his own paper’s neocon line and charged: “The protesters are Hong Kong’s enemy right now, but few dare say it.”

The neoconservative agitators for Anglo-American regime-change wars were especially vocal in their support, lauding the rioters as freedom fighters against the “evil” Chinese Communist Party. US Senator for Missouri Josh Hawley, one of a cohort of younger US politicians who are obsessively anti-China, said of the protestors: “their courage and bravery under pressure is really something to behold”. A week before Hedley Thomas’s article, another of the younger anti-China US politicians, Senator Tom Cotton of Arkansas, tweeted his support for the “brave individuals standing against Chinese Communist Party tyranny” and blamed the Hong Kong police for the “unacceptable” violence.

Now, tragically, it is America that is burning, with the protests sparked by the brutal police killing of AfricanAmerican man George Floyd overrunning its cities from coast to coast. As well as the sense of systemic injustice at the hands of a militarised police force, fuelling the rage is the decades of economic decline which has entrenched the structural disadvantage of poor people who are disproportionately black and Hispanic. Donald Trump claimed he had brought economic improvement, and he seemed to genuinely want to, but those communities are not behaving like people whose lives have been improved.

In the face of these protests against their judicial and economic system, the hypocrisy of the neocon faction has been disgusting. “They must stop”, demanded Hawley, accusing the rioters of endangering “innocent citizens and police officers”. Cotton, a former soldier, called for the army to be sent in, insisting there be “no quarter for insurrectionists, anarchists, rioters, and looters”.

While there are many facets of America’s social breakdown that must be addressed, the domestic consequences of decades of wasting blood and treasure on deadly regime-change wars is relevant to consider. The neocon and so-called “liberal interventionist” permanent war factions that have taken control of the USA and pursued the regime-change agenda, ultimately targeting Russia and China, has revived Cold War paranoia as a tool of repression at home. The post-9/11 hysteria about “Islamic” terrorism, which has given way to hysteria about Chinese infiltrators, was used to impose police-state policies which gave the political elites and their Wall Street masters greater control over everyone’s lives. Towards the end of the Cold War in 1988, American psychiatrist Jerome D. Frank of the Johns Hopkins University School of Medicine and Soviet researcher Andrei Y. Melville of the Institute of USA and Canada Studies of the USSR Academy of Sciences, published an insightful report, 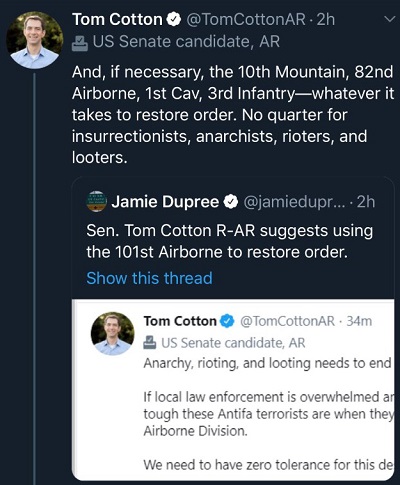 The Image of the Enemy and the Process of Change, which noted how important creating an enemy image of a foreign “threat” was to enforcing political control at home, but to the detriment of society. They wrote:

“The image of the enemy is not only very dangerous for the stability and security of international relations but leads to highly negative consequences for the domestic life of countries. This happens because the hysteria about the outer threat is often used as justification for secrecy and suspicion, covert actions, policies creating ‘mobilised’ societies, artificial national unity, ‘witch hunts’, and policies suppressing dissent, all ignoring domestic problems and distracting attention from them. By projecting the blame for these on the enemy, each side protects its own self-esteem from the realisation that it has been unable to solve its own problems.” (Emphasis added.)

For a nation “conceived in liberty” as Abraham Lincoln said, it’s not only the militarised police state that America has become that is anathema to its principles. So too is the premise of regime change, disguised as bringing “liberty” to other countries. The great early president John Quincy Adams, son of founding father John Adams, addressed this in a profound speech in 1821, titled “What has America done for mankind?” While emphasising America’s commitment to freedom, Adams gave equal weight to abstaining “from interference in the concerns of others, even when conflict has been for principles to which she clings”. He said America’s heart and prayers will be “wherever the standard of freedom and independence has been or shall be unfurled…. But she goes not abroad, in search of monsters to destroy. She is the well-wisher to the freedom and independence of all. She is the champion and vindicator only of her own.” Foreshadowing the regime-change disasters of the 21st century, Adams warned that if America did involve herself in other conflicts, even in the name of freedom, her policy would change from liberty to force. “She might become the dictatress of the world”, he said. “She would be no longer the ruler of her own spirit.”

Police state
War
[ Back to top ]