‘Regulator beware’ of the Morrison government

The perverse reality of the Australian financial system under the Morrison-Frydenberg bankers’ regime is that the regulator fears the government more than the banks fear the regulator. This was demonstrated in technicolour by the ousting of the Chair of the Australian Securities and Investments Commission (ASIC), James Shipton, and his Deputy Chair, Daniel Crennan, which was instigated by a 23 October 2020 press release from Treasurer Josh Frydenberg’s office. Frydenberg announced Treasury’s inquiry into an alleged expenses scandal involving Shipton and Crennan, and although both men were later cleared of all wrongdoing, the ensuing media furore enabled Frydenberg to make sweeping structural changes at the regulator, cheered on by pro-bank parliamentarians who have abandoned Australians to predatory financiers. This government’s hardcore ideology of “let the buyer beware”—caveat emptor—is reinforced by “let the regulator beware”—of the government!

While Shipton was a former banker, he was also experienced in regulation. He was formerly head of government and regulatory affairs at Goldman Sachs’ Hong Kong office, leaving in 2013 to work for the Hong Kong Securities and Futures Commission (SFC) for three years, before his 2016 appointment as an Executive Director of an international financial regulation program at Harvard University in the United States. Shipton was appointed ASIC Chair in October 2017, on the eve of the commencement of the pivotal Financial Services Royal Commission, where ASIC would repeatedly be slammed for poor regulatory performance and its failure to protect the public from predatory financiers.

The 15 April 2021 Australian Fianancial Review reported the government had expected Shipton would be a “smooth operator”, hoping he would “shut down the provocative public commentary about business” that his predecessor Medcraft had deployed (Medcraft had declared Australia was a paradise for white collar crime and said the banks were “extremely powerful” in Australia), albeit to not much effect; but was evidently unpleasantly surprised when Shipton soon went off-script.

Shipton officially commenced as ASIC Chair on 1 February 2018. By 19 March, he was warning that products and services in banking and wealth management must be anchored to the core functions they serve for society, i.e. “finance for the real economy” instead of speculative “finance for finance’s sake”.1 Shipton’s 11 April 2018 speech at the Thomson Reuters Australian Regulatory Summit would have deeply alarmed the government, as Shipton showed he did not align with its “caveat emptor” ideology. Shipton pointed out reasonably that the “‘democratisation’ of finance” meant Australians today made more financial decisions than previous generations, in a sector where products and services were “intangible and often complex”. Rather than blaming the consumer, Shipton protested that Australia’s system “was designed on the premise that participants should do their part to ensure the system operates appropriately”, and slammed the financial sector for “repeated instances of industry failures that have led to crises that have not been remediated by the industry”. Shipton believed regulation was a means to “[find] ways to disrupt, or sabotage, harmful behaviour”—i.e. stop it occurring—which prevented the financial sector from “properly serving its role in society” or “result[ed] in human suffering”.

He consistently emphasised that “every cent in the financial system is ‘other people’s money’”, and that finance industry participants “must never forget that financial risks can [be], and often are, catastrophic to real people and can, at an extreme, cause human suffering … it is real money to real people”. 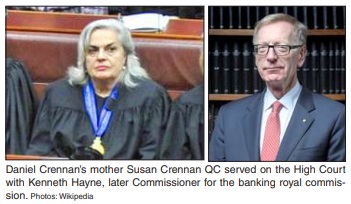 Crennan led an internal enforcement review at ASIC, assisted by a senior barrister, a legal academic and the Deputy Commissioner of the Australian Federal Police, which was finalised in December 2018. Subsequently, ASIC established a Crennan-led Office of Enforcement, supervised by an Oversight Committee which would comprise a former superior court judge or senior barrister, a legal academic, an economist, and a senior law enforcement officer who was independent of ASIC. Crennan also appointed barristers to conduct ASIC’s compulsory investigations, and proposed a fast-tracked six-month decision deadline for ASIC to prosecute reports of misconduct.

Scandals exposed by the Royal Commission put extreme pressure on the Turnbull government, which was enough to flip then-Treasurer Scott Morrison from sneering at the Royal Commission as a “populist whinge”, to his 20 April 2018 announcement of some of the “most significant increases to the maximum civil penalties … in twenty years”—legislation introducing extraordinary new penalties and powers for ASIC, which came into effect on 13 March 2019, about a month after Commissioner Hayne handed down the Royal Commission’s final report, referring 43 matters to ASIC for investigation.

Both Shipton and Crennan made it clear these new powers were crucial, observing that the past regulatory environment made it very difficult for ASIC to pursue any meaningful action. 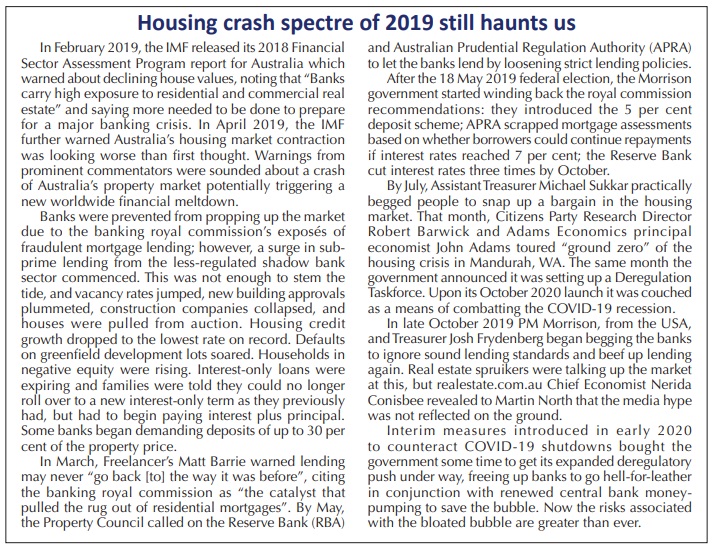 In a 15 February 2019 interview with the ABC, Crennan said “those that don’t fear ASIC will be making an error. We are now entitled to pursue extremely long custodial sentences. These are game-changing provisions which we’ve been seeking for some time. If wrongdoers persist in their wrongdoing, which has been uncovered in great detail [in the Royal Commission] … they will be facing very long custodial sentences and very high, crippling civil penalties”. Crennan told the 23 March 2019 Sydney Morning Herald the legislative reform gave ASIC “real penalties and real weapons … [which] should be understood by the regulated population to mean that we should be feared and we should be taken very seriously.”

Despite COVID-19 resulting in temporary changes to ASIC’s priorities and deferred regulatory work, in the first six months of 2020 ASIC significantly increased its investigations and enforcement activities compared with the previous six months. The 20 August 2020 AFR reported that Crennan had announced ASIC planned to launch all of its remaining Hayne Royal Commission lawsuits by the end of the year, including cases involving Big Four banks. Two months later, both Crennan and Shipton were out.

As detailed in the 16 June 2021 AAS, responsible lending laws were a strong point of contention between Treasurer Josh Frydenberg and James Shipton. Shipton made his position clear in a 29 March 2019 interview with financial reporter Ticky Fullerton for Your Money, saying he “firmly believe[d]” responsible lending laws were “a crucial part of a consumer protection mechanism … [and] fundamentally assist the good governance and good business of a bank”. Doubling down on his statement to the Australian Financial Review Banking & Wealth Summit several days earlier, where he “debunk[ed]” the myth that responsible lending laws caused a credit crunch, Shipton told Fullerton “the law is the law. The law hasn’t changed in ten years. … If financial institutions believe that they are within the law, acting in a safe, sound, legal, but above all fair capacity, then they should have confidence.”

In the interview with Fullerton, Shipton confirmed the responsible lending laws needed a reasonable test interpretation which would require some court decisions to clarify—such as the landmark Westpac vs ASIC test case, infamously dubbed the “wagyu and Shiraz” case after the judge ruled against ASIC, saying consumers could reduce extravagant expenses if they wanted to take out a loan. Pro-bank parliamentarians stridently attacked ASIC’s intention to appeal to the High Court, and Reserve Bank Governor Philip Lowe and Treasury Secretary Steven Kennedy pressured ASIC to drop the appeal, warning it would undermine lending in the COVID-19 recession.

In September 2020, Frydenberg announced the government intended to wind back responsible lending laws, simultaneously announcing it would strip ASIC of responsibility for enforcing them—a surprise move which blindsided ASIC Commissioners.

Several weeks after Frydenberg’s responsible lending rug-pull, his 23 October 2020 press release set off the media furore over the supposed “expenses scandal” which would result in Crennan’s abrupt resignation and Shipton’s eventual “agreement” to step down, despite both being ultimately cleared of wrongdoing.

The scandal allowed Frydenberg to initiate sweeping structural changes at ASIC and replace Shipton with his own Chair, former banking lawyer Joe Longo, who, until early 2019, worked for seventeen years at the notorious Deutsche Bank. Infamous for numerous high-profile scandals involving money laundering, bribery, corruption and fraud, Deutsche Bank is where Longo “crossed swords with regulators investigating and prosecuting the German bank”, according to the 29 April 2021 AFR. On the same day, another AFR article triumphantly declared the “Shipton litigation era ends with Longo shake up”. The 3 June 2021 AFR reported Longo “made it clear at his first public appearance he will be the ‘business-friendly’ regulator craved by Treasurer Josh Frydenberg”. Sure enough, two weeks later the Australian announced “New ASIC regime dumps ‘why not litigate’ mantra”, and Longo told a parliamentary committee on 18 June that the regulator’s enforcement settings would be updated to reflect new priorities.

Helpfully, ASIC’s new priorities were set by Frydenberg himself. On the 29 January 2021, Frydenberg announced a new “Statement of Expectations” for ASIC, which Crennan observed was “a powerful tool” for the government to determine how the regulator should operate. The Statement emphasised “the Government expects ASIC to support Australia’s economic recovery from the COVID pandemic”—code for backing off from the banks to enable them to pump up the housing market. Frydenberg simultaneously announced the creation of the Financial Regulator Assessment Authority (FRAA) to oversee financial regulators, purportedly in response to a Royal Commission recommendation. However, Hayne had called for a new oversight authority independent of government— in reality, the FRAA is a Trojan horse for further government stranglehold over ASIC. Members of the FRAA consist of Treasury appointees and the Treasury Secretary, and will assess ASIC over its performance against the government’s Statement of Expectations. In addition, the Morrison government’s broader regulatory reforms, announced a few weeks before the Shipton/Crennan scandal erupted, mean ASIC will also be assessed on how well it performs against the government’s deregulation agenda.

Revealingly, the FRAA was supported by pro-bank parliamentarians such as Liberal MP Tim Wilson, formerly of the banker-founded Institute of Public Affairs—as good a sign as any that the banks don’t consider the FRAA a threat. This is in sharp contrast to the vicious attacks on ASIC’s regulatory action under Shipton and Crennan, and against Shipton and Crennan personally, by Wilson’s banking mafia cohorts: Liberal MP Jason Falinski, and Senators Andrew Bragg and ex-IPA director James Paterson, who reportedly all pressed Frydenberg for changes at ASIC.

Complaints from Bragg and Wilson foreshadowed Frydenberg’s structural changes to ASIC’s day-to-day operations, which gave Longo, as Chair, sole responsibility for all operational matters; Crennan observed that this implied ASIC’s other commissioners wouldn’t have dayto-day operational responsibilities. This doesn’t bode well for the powerful enforcement legislation which the government enacted in March 2019, as it’s one thing to have the powers, but another to actually use them— Frydenberg’s subsequent ouster of Shipton and Crennan is a strong indication the powers were a symbolic response to the royal commission, and never intended to be used. With the power concentrated in his hands, ASIC’s new “business-friendly” Chair could simply decide never to apply them. It remains to be seen whether Longo will dismantle or disempower Crennan’s Office of Enforcement, a move which would be cheered by the banks.

The Shipton saga has a curious but lawful historical footnote. Frydenberg’s dirty fight against ASIC is a continuation of a decades-long war of ideology starting in the 1980s, which included a factional struggle between the Liberal Party’s neoliberal “dries” (pro-deregulation and free market radicals) and “wets” (more traditional liberals), to take over the party. The über-neoliberal Peter Costello, a darling of the IPA banking mafia (p. 16) whose tenure as Australia’s longest-serving Treasurer ensured the toothless regulation that allowed the banking scandals that ultimately led to the royal commission, spearheaded the dries’ coup d’état by forcing out Liberal wets in safe seats; to seize his seat of Higgins, Costello ousted moderate MP Roger Shipton—James Shipton’s father. A generation later, it was Costello’s successor, Finance Minister Kelly O’Dwyer, who appointed James Shipton to head ASIC, only for James to later be ousted by the same neoliberal faction which had expelled his father.