If Prime Minister Scott Morrison were capable of shame, he would be looking for a hole to crawl into after the revelation that his government has no way to ship the 70,000 tonnes of coal he promised as humanitarian aid to Ukraine. Despite warnings from logistics experts since at least 2014, and two years of COVID-induced disruptions to Australia’s “just enough, just in time” international supply chains, the government’s devotion to neoliberal economic doctrine has seen it let Australia’s merchant shipping fleet dwindle almost to nothing. Now, the effects of the economic sanctions the USA and its allies (Australia included) have imposed upon Russia are both worsening the existing problems, and look set to prolong them indefinitely. Happily, Australia’s own history furnishes a solution, in the form of the successful stateowned Australian National Line (ANL), which whoever forms government after next month’s election is out of time and excuses to keep ignoring.

Morrison announced in a 20 March press release that Australia would donate 70,000 tonnes of coal for Ukraine’s power stations, after its domestic supply lines were interrupted by the fighting. “It’s our coal, we dug it up, we’ve arranged the ship, we’ve put it on the ship and we are sending it to Ukraine”, Morrison told media (emphasis added). Like most of Morrison’s utterances, however, at least half of that statement was an outright lie—because as the 24 March Sydney Morning Herald revealed, there was in fact “no ship contracted to send the coal from Newcastle to the war zone, and none suitable to be commandeered” for the purpose.

Resources Minister Keith Pitt MP told SMH that “[the] logistics around the supply and delivery of the coal is still being determined”, but that there was no cause for concern because “the Australian coal industry delivers coal around the world every day”. All of it, however, is transported on foreign ships, whose owners the government had been unable to convince to sail into a warzone. Australian-flagged vessels can be legally requisitioned in an emergency; but as the SMH reported, to ship 70,000 t of coal would require either one “Panamax”- class vessel (the maximum size ship that can transit the Panama Canal), or half a “Capesize” ship (the largest type of dry cargo carrier, which is too large for the Panama or Suez Canals, and must instead sail around the southern capes of Africa and South America). “[T]here aren’t any of these among Australia’s local shipping fleet”, reported SMH, “which is down to just 13 registered vessels, consisting of four LNG [liquefied natural gas] carriers, three cement vessels and six ships that operate in the Bass Strait, including the two Spirit of Tasmania vessels.”

More importantly from a national security perspective, this paltry fleet (down from 100 some 30 years earlier) cannot handle the imports Australia relies upon, either. None of them, for example, can carry either crude or refined petroleum, thus leaving Australia’s fuel security also at the mercy of foreign powers. As of January, only 30 per cent of all petroleum products sold in Australia were refined here, from only 25 per cent domestic feedstock.1 The result, as retired Air Vice Marshall John Blackburn has shown repeatedly since his authoritative 2014 study on fuel security for the National Roads and Motorists’ Association, is that were our international supply lines cut, Australia would run out of diesel—essential to the transport of all goods, including other fuels—in about a fortnight, whereupon the economy would collapse.2 The steep rise in price of many consumer goods and industrial inputs is also due mainly to the increased cost of containerised shipping, which has risen sevenfold (!) since the onset of COVID, Australian Retail Association (ARA) chief Paul Zahra told the Guardian on 13 February. Carlos Villazon, managing director of logistics company Stelno, blamed cartel behaviour by shipping companies, enabled by lax regulation. “While pricefixing cartels are illegal in Australia”, the Guardian explained, “international shipping companies are allowed to set prices collectively using an exemption that the chair of the Australian Competition and Consumer Commission, Rod Sims, has repeatedly called on the government to repeal.” Said Villazon, “essentially, they’re modern day pirates at the moment because the prices are not really controlled or regulated by any government.” 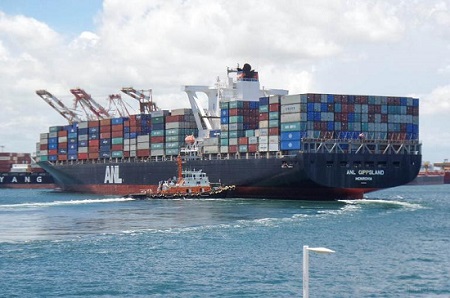 In a 3 January media release, Labor leader Anthony Albanese pledged that should he become PM, his government would “strengthen Australia’s economic sovereignty and national security by building an independent Strategic Fleet to secure our ongoing access to fuel supplies and other essential imports”. Displaying Labor’s own neoliberal leanings, however, he added that “While these ships will likely be privately owned … we will ensure they are available for use by the Defence Forces in times of national crisis” (emphasis added). Albanese spoke similarly in a March 2015 speech in Parliament, in response to the then-Liberal PM Tony Abbott’s legislation (which Labor supported) to dissolve the Australian River Co. Ltd, the last remnant of ANL, as part of a program to remove most of the shipping sector’s remaining regulations. Albanese acknowledged ANL’s success, but insisted there was “no need for a directly government owned Australian shipping fleet. That is a service that is best provided by the private sector with an appropriate competitive framework.”

That might work in ordinary circumstances. But with a crisis already upon us, history shows that only government, with the capital of the whole nation behind it, can shoulder the risks and issue the credit necessary to rebuild a merchant shipping fleet from scratch. Indeed, that is why ANL was created in the first place, as the Australian Shipping Board, at the outset of World War II, when Britain (upon which Australia was entirely reliant for shipping) reserved its merchant fleet for its own use.3 Restructured as a Commonwealth-owned corporation (similar to Australia Post today) in 1957, ANL transported freight for Australian industry—very profitably for all concerned—for another 41 years, until it was sold off by the Howard Liberal government in 1998. God forbid another large-scale war break out—though by their blind support for Anglo-American geopolitical agendas, Labor and the Liberals both are certainly doing their best to start one. But even in the present crisis, the private sector has proven itself unwilling or unable to meet the challenge. During the pandemic the government directed the Reserve Bank of Australia to create $320 billion as “quantitative easing” to save the banks. Only the two major parties’ shared neoliberal ideology stands in the way of them doing the same to rebuild the real economy, a new ANL included.