Rewriting the rules of international finance, Step One

Slowly but steadily, China has levelled a challenge to prevailing multilateral financial agencies. From its increased international lending to developing nations from the mid-2000s, to its post-2008 calls for reform of the financial order, its Belt and Road lending, initiation of new multilateral funds, and recent efforts to provide emergency financial relief, the country has proven there is an alternative to the IMF-World Bank development pathway. 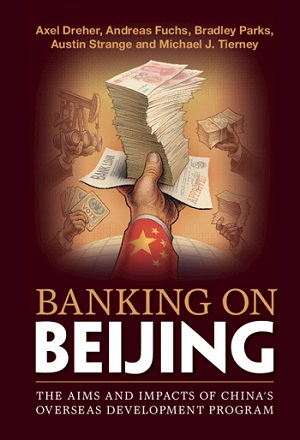 The FT article cites figures from AidData, a research lab at William & Mary’s Global Research Institute. In May the agency published Banking on Beijing: The Aims and Impacts of China’s Overseas Development Program, which outlines China’s “transition from ‘benefactor’ to ‘banker’”. In the twentieth century China mainly provided aid, but it now lends to “bankroll big-ticket infrastructure projects”. This, says the book’s abstract, “creates new opportunities for developing countries to achieve rapid socio-economic gains, but it has also introduced major risks, such as corruption, political capture, and conflict”. This is partly because China insists on projects and loans being approved by (elected) “politicians rather than technocrats”, states an AidData blog summarising the 400-page book, which “often leads to projects being greenlit that disproportionately benefit the core political supporters of the President or Prime Minister”. In other words, China is circumventing the control of unelected bankers and bureaucrats! The book does, however, rubbish the notion that Beijing is a “villain” as its rivals and critics claim.

In just the first two decades of this century, states the blog, “Beijing became the world’s largest official creditor, with annual lending volumes that exceed those of the World Bank, the International Monetary Fund, and all Paris Club creditors combined. Since it launched the Belt and Road Initiative (BRI), Beijing has outspent Washington on a more than 2-to-1 basis, Brussels on a more than 4-to-1 basis, and London on a more than 8-to-1 basis. It has accomplished this extraordinary feat by building a war chest of foreign exchange reserves worth more than US$3 trillion and positioning itself as the developing world’s go-to banker for big-ticket infrastructure projects.” The book demonstrates that “Chinese government-financed development projects have major impacts on economic growth”, something that certainly cannot be said of IMF/World Bank lending. Statistical analysis reveals that within two years of funding approval of a single project, Chinese development increases economic growth in the host country by 0.95 per cent, implying that with four projects a nation can “reasonably expect to increase its rate of economic growth to 4.85 per cent” within two years. “The authors find that these economic impacts materialise quickly (within 2-5 years) and they are especially strong in Africa.” (This was demonstrated in Ethiopia, which, boosted by Chinese-built infrastructure, achieved a double-digit rate of annual GDP growth and still sat at 5.6 per cent in 2021.) Furthermore, projects favoured by the Chinese “substantially reduce economic inequalities”.

Beijing has also started acting as an “alternative lender of last resort” to bail out distressed nations but “without requiring economic policy discipline or pursuing a co-ordinated debt rescheduling with major creditors”, according to co-author of the report and AidData Executive Director Bradley Parks, whom FT quotes. (Emphasis added.) In other words, China allows nations to evade the IMF’s neoliberal loan conditions. For example, China initiated a currency swap agreement with Pakistan from which it can withdraw funds as necessary.

Supplying such an alternative to the IMF route is clearly not on. FT admits there has been a backlash over several decades against IMF lending, due to its “austere prescriptions”, particularly in Asia and South America. “The suspicion is that countries seek out the loan to avoid going to the IMF, which demands painful reform”, tut-tutted Gabriel Sterne from Oxford Economics, a former senior IMF economist.

The Week admits that the IMF is synonymous with “neoliberal free-market ‘shock therapy’”. The strings attached to its loans, including “open markets, scrapping government subsidies, deregulating key sectors, privatisation and debt management”, have “created social chaos across the globe”, according to Business Standard on 30 August in “A troubling history of IMF loans around the world”. No wonder, stated an article titled “China vs the IMF”, posted by Good Governance Africa in 2017, that developing countries are “increasingly looking elsewhere for finance”.

If it is no longer the lender of last resort, the largely US-controlled IMF will lose its power to command the policy direction of nations. Yale University political science doctoral candidate James Sundquist in a March 2021 paper, “Bailouts From Beijing: How China Functions as an Alternative to the IMF”, found that “a one per cent of GDP loan from China decreases the absolute probability of a borrower turning to the IMF by six percentage points, which is both statistically and substantively significant”.

FT cites Sean Cairncross, former CEO of US government foreign aid agency the Millennium Challenge Corporation, who claims China targets nations with crucial raw materials, large markets, or that lie on trade routes. Its development plan, he alleges, “is a way to narrow the strategic options for the US and for the West, in terms of access and influence globally.”

Actually, rather than seeking control with its loans, China has hit upon a reality that benefits itself as much as those it is assisting. Only by fostering real economic growth can nations be brought out of debt with the population intact (and thereby increase trade with China)—not by selling off public assets, removing subsidies on food or electricity, or cutting budgets, which plunges nations further into crisis.

Establishing an exemplary alternative, as China has done, is the first step. What is required now, is the consolidation of growing support for an international agreement to reform or replace international agencies within a new financial architecture.