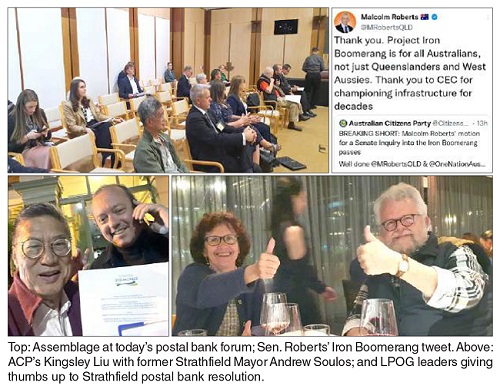 Today, 7 Sept., the Licensed Post Office Group hosted a forum in Parliament House for politicians, advisors and the media, calling on our nation’s leaders to endorse Member for Kennedy Bob Katter’s legislation for a public post office bank. Featured speaker, former New Zealand Cabinet Minister Matt Robson, whose party started NZ’s postal bank, Kiwibank, will speak from experience about how such a fight can be won. The success of Kiwibank, as Robson will attest, indicates why the New Zealand government announced on 22 August that it would assume direct control of the bank. With an increasing internal push to privatise the institution by stealth, the government realised it had to intervene or face the wrath of a population who will no longer forgo public banking. With interest rates rising and the cost of living exploding, citizens who have had a taste of something better will not be sacrificed at the altar of the private bankers’ club!

From meetings held by the LPOG, Citizens Party and Robson in parliament this week—with MPs from all parties, including government ministers—it is clear that the heady neoliberal days of governments leaving banking and banking policy to the private sector are coming to an end. This epoch was typified by then-Finance Minister Joe Hockey’s 2008 post-global financial crash claim that “Governments should not be involved in banking.”

That ideology has held back the development of our country, with devastating consequences. This week in parliament an inquiry into Project Iron Boomerang was voted up, tabled by One Nation Senator Malcolm Roberts (back page). As the Citizens Party reported in a September 2020 media release, the project would already have been built were it not for the prevailing neoliberal economic policy:

“This project was close to being adopted as a Coalition policy before the 2013 federal election, but sources have informed the Citizens Party that then-Opposition Leader Tony Abbott personally rejected it. Project Iron Boomerang could have been close to completion, driving the reindustrialisation of Australia; instead, in government Abbott accelerated the deindustrialisation of Australia by shutting down the car industry. Abbott was at the tail-end of more than three decades of the neoliberal deindustrialisation of the nation by financial deregulation, which diverted investment away from infrastructure and industry and into financial speculation. … If Australia is to revive the economy, we must abandon small-minded politics and unleash the power of economic development.”

Sounding the trumpet for big rather than small-minded ideas, WA ALP Senator Glenn Sterle made an important intervention following Sen. Roberts’ motion, demanding a focus on “the big-ticket items. … Let’s get back to the big stuff about building a better nation, as I said in my first speech, and leaving it better than how we found it.” (Back page)

Fittingly, on the eve of the postal banking forum, on 6 September inner-western Sydney’s Strathfield Council unanimously passed a motion in support of the postal bank. This follows the passage of a similar motion by Cobar Shire Council, NSW, on 28 August—adding to those passed by Narrabri, NSW, Banana, Qld and Yilgarn, WA—and was warmly greeted by LPOG Executive Director Angela Cramp and Deputy Chair Andrew Hirst (pictured).

This week’s events bring to a head the historical battle for independence from the Money Power—the period ahead will be decisive.

Postal Savings Bank
[ Back to top ]