We must defeat the parasitic oligopoly! 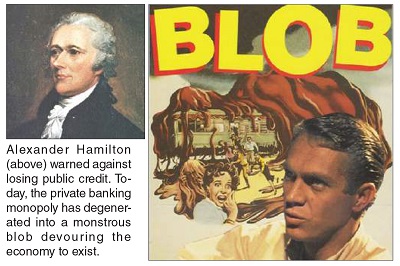 In his 1795 Report on Public Credit, US Treasury Secretary Alexander Hamilton issued the following warning to the private bankers who opposed his National Bank:

“If the individual capital of this country has become more adequate to the exigencies than formerly, it is because individuals have found new resources in the public credit—in the funds to which that has given value and activity. Let public credit be prostrated, and the deficiency will be greater than before. Public and private credit are closely allied, if not inseparable. There is, perhaps, no example of the one being in a flourishing, where the other was in a bad state. A shock to public credit would, therefore, not only take away the additional means which it has furnished, but by the derangements, disorders, distrusts, and false principles which it would engender and disseminate, would diminish the antecedent resources of private credit.”

Put more plainly, Hamilton was advising the banks that thanks to credit from the National Bank, the economy had grown bigger for everyone, including the private banks. If they succeeded in destroying the National Bank and its public credit, because they insisted on a private monopoly over finance, they would damage the economy and their own businesses.

Unfortunately, the enemies of the National Bank didn’t heed his warning, and thus ensued a perpetual battle between a private financial oligarchy which demands monopoly control over the financial system, and those who recognise that the government’s responsibility to what the US Constitution calls the “general welfare”, a.k.a. the common or public good, could not be achieved without breaking the private financial oligarchy’s banking monopoly and harnessing the power of public credit through national banks. In the more than two centuries since, Hamilton was followed by John Quincy Adams, Abraham Lincoln, and Franklin Roosevelt in the USA; the patriots in the “old” Australian Labor Party educated by Commonwealth Bank founder King O’Malley; and sundry political forces in nations all over the world who waged the fight to establish public banks, with varying degrees of success.

However, in the neoliberal era of the past four decades, the private banking monopoly has had political ascendency. All over the world it succeeded in privatising the hard-fought public banking institutions, including Australia’s Commonwealth Bank. In doing so, it confirmed Hamilton’s 1795 warning, and worse: the shock from not having to compete with public credit institutions that invested in infrastructure and productive industries initially took the form of a short-term sugar high for private banks being able to chalk up massive profits from speculation. Very soon this gave way to once-productive economies racking up massive, unpayable debts trying to maintain accepted living standards. The corporate banking monopoly, morally incapable of looking further than shortterm financial profit goals, increasingly abused its monopoly banking power to cannibalise the economies banks are supposed to serve. It invented more insane forms of financial speculation, especially toxic derivatives, knowing its minions in governments would bail it out. And it abandoned the traditional model of doing business that at least required banks to earn profits by helping their customers with credit to grow businesses and wealth, in favour of mass-fleecing their customers and inflating profits by cutting the services that are the very essence of the banking business. It is a parasitic blob, devouring all before it.

This is precisely what is happening in Australia and around the world today with the banking oligopoly’s drive to close branches, remove ATMs and force all customers into cashless, digital banking and commerce. They are desperate to expand profits and control in a collapsing economy that is of their own making.

This cursory history illustrates that what we’re fighting for in the regional banking and postal bank campaign is far bigger than just reliable banking services. We’re fighting to restore public power over banking, which is essential for economies to truly advance the common good.