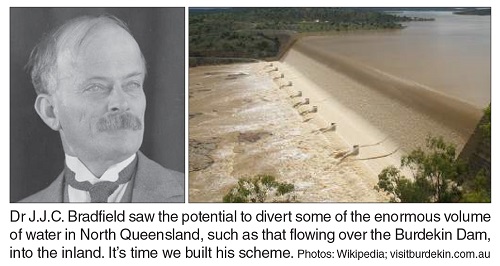 Looming inflation is putting upward pressure on interest rates, spelling disaster for Australia’s debt-laden homebuyers. The rapid spread of COVID-19 has thrown supply chains into disarray, emptying supermarket shelves of food and necessities. These are not short-term economic aberrations; these are disasters waiting to happen as a consequence of decades of ideological economic sabotage. Essentially, the neoliberal economic ideology that governments should not be involved in the economy has stripped governments of any economic competence, with the expectation that the private sector—a.k.a. the market—would meet all economic needs, including infrastructure, and respond flexibly and efficiently to economic crises. The government’s role would be to facilitate what private corporations demanded.

Where has that left us? With the major banks concentrating virtually all of their lending into the housing bubble in the capital cities, saddling Australians with record household debt, extremely vulnerable to the slightest rise in interest rates. And with a dysfunctional response to a pandemic, with governments incapable of expanding critical health infrastructure or anticipating and managing the consequences of their public health measures on economic supply chains, leading to shortages of labour, food, and necessities.

Australia today bears little resemblance to the Australia at the end of World War II, which had just pulled off an amazing wartime economic mobilisation that had both won the war and transformed the economy into a manufacturing powerhouse. Australia could do literally anything. We established a world-class car industry starting with Holden, which at its peak included six separate manufacturing companies. We led in developing space technology, being just the third country to launch a satellite from its own territory. And we built one of the engineering wonders of the world, the mighty Snowy Mountains Hydroelectric Scheme, which we started at a time when we had all-time record federal public debt of 140 per cent of GDP (compared to 30 per cent today), and the project cost 15 per cent of GDP (the equivalent of $300 billion today—an unthinkable idea to the mental pygmies currently in government).

In those days, economic competence was concentrated in government. The best and the brightest who had the vision to develop Australia worked for the government departments and agencies dedicated to that work. There was no greater visionary than Dr J.J.C. Bradfield, who built the Sydney Harbour Bridge, Sydney’s subway train system, and designed the great water diversion scheme in north Queensland that bears his name.

On 1 October 1941, Dr Bradfield laid out this vision for Australia in Rydges Magazine:

“WHITHER AWAY AUSTRALIA?: By a bold progressive policy of national development rejuvenate our arid lands; provide hydro-electric power for industrial purposes; open up our vast territories by highways, aviation ways, and railways; manufacture our primary products into goods we require; populate, develop, and defend Australia; be a free and vigorous people keeping our place in the sun by our individualism?”

Bradfield contrasted that vision to one of “wither away Australia”, as a consequence of not developing the nation, which has certainly been the story of the last four decades.

In recent times, however, some political leaders have started calling for change, for Australia to return to a development perspective. Bradfield’s scheme, to divert the headwaters of North Queensland’s immense rivers over the Great Dividing Range to expand food production in the outback and even the Murray-Darling Basin food bowl, which Bob Katter and the Citizens Party fought for all along, has increasingly become a focus of these calls. Most prominent is Deputy Prime Minister Barnaby Joyce: as a lowly backbencher in the 2019 election, Barnaby pushed the Bradfield Scheme hard; since returning as deputy PM, what has he done about it?