Which is the real black economy?

Over the last three decades the so-called Black Economy has shrunk (top), while the real drain on the nation—the scourge of financial derivatives (below)— has increased dramatically. The government’s Currency (Restrictions on the Use of Cash) Bill 2019 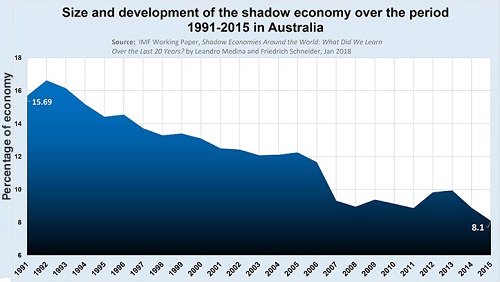 is not motivated by the desire to restore the flow of evaded tax or rein in criminal gangs. The government and its advisers1 are well aware that the real criminal masterminds sit at the apex of society; they are not the barbers and house cleaners who might accept payment in cash as the 2017 Black Economy Final Report claims.

According to the Black Economy Taskforce report by Michael Andrew, the late head of Big Four auditor KPMG who recommended the $10,000 cash ban, hair dressers, house cleaners, nannies and tradies are part of a stratum of Australian society which tolerates and even celebrates its participation in the black economy, and which must be stamped out! Meanwhile, derivatives traded by the biggest banks which are sucking the lifeblood from the economy, are almost entirely unregulated. 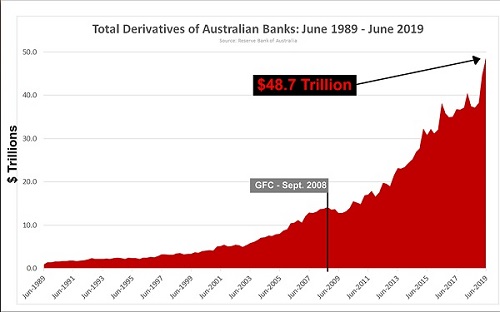 The real purpose of the legislation is to exert control, both financial and social, as the financial system collapses. The $10,000 cash ban, along with the Morrison government’s cashless welfare card and the new electronic payment infrastructure, the Australian Payments Network (initiated by a Reserve Bank of Australia review and coordinated by KPMG), will lock Australians into using a financial system which can track their every move.

The Black Economy report discussed the need to increase transparency by reducing the use of cash: “non-cash options can be traced and monitored” and “leave an invaluable audit trail”, it said. The Australian Taxation Office (ATO) would police transparency. The Black Economy report called for the ATO to be designated as a law enforcement agency with the power to obtain bank information, and for other Home Affairs agencies to be empowered to use surveillance to identify and stamp out black economy activity such as the illicit tobacco trade. In a 2017 podcast interview with CPA Australia, KPMG’s Andrew emphasised the need to “shift from a cash to a non-cash society where we can therefore monitor and measure people’s activities”.

The real criminals designed today’s monetary system and tax framework to allow the world’s biggest corporations to evade tax, and to allow the elite to make money from the unhampered growth of derivatives contracts, which are almost completely unregulated and unmonitored. Derivatives function like a parasite or cancer. They feed off a segment of the physical economy, multiplying themselves many times over, leeching more from the real economy as they grow, diverting crucial resources away from their host. There is none of the transparency demanded by KPMG of hairdressers and mechanics in this market: derivatives are often hidden “off balance sheet”, traded outside formal markets, and, as with three of Australia’s Big Four banks, not even reported in their annual reports. They are also exempted from being “bailed in” to save collapsing banks, due to the level of complexity and interconnection with counterparties in other countries.

The existence of derivatives is due to the massive global wave of deregulation which dismantled the protections of the Bretton Woods monetary agreement that had prevented speculation on currencies2, and of Glass-Steagall and similar European banking separation laws3, which prevented insured deposit-taking banks from gambling. The same regulatory take-down precipitated the network of offshore tax havens that not only created the (KPMG and other Big Auditor-constructed) infrastructure for tax evasion and flight capital, but which facilitated drug and terrorism money laundering. This is the real black economy, shrouded in secrecy and protected by states at the people’s expense.