Will standing for nothing be Labor’s obituary? 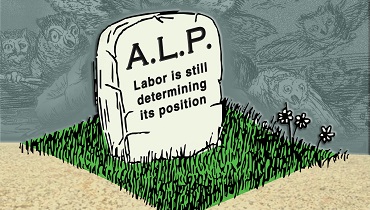 In the synthetic left-right divide of politics, everybody will disagree with one side more than the other. In Australia, the divide has become more pronounced on cultural and symbolic issues, because in the 1980s the Australian Labor Party abandoned its core economic philosophy to embrace neoliberalism, the doctrine that systematically dismantled the government’s role in the economy through deregulation, privatisation and outsourcing.

The ALP had previously been the party that fought the “Money Power”, the global financial interests that controlled politics. The ALP-affiliated newspaper The Brisbane Worker on 5 January 1907 proclaimed: “The Money Power! It is the greatest power on earth; and it is arrayed against Labour. No other power that is or ever was can be named with it”. Under Bob Hawke and Paul Keating in the 1980s, the ALP unleashed the banks through deregulation, smashed manufacturing, and sought to turn the economy into a global centre for financial services, the “Wall Street of the south”, as Keating envisioned. Notably, as much as Keating and Liberal leader John Howard despised each other, Howard supported Labor’s key economic policies, and extended them when he took government.

Now that we have experienced neoliberalism for 40 years, the public largely recognises and despises what it has done to our economy, especially to our productive industries and essential services. The collapse of global supply chains in the pandemic exposed the extreme economic vulnerability stemming from the loss of manufacturing. Outside of the two major parties there is a growing consensus that the excesses of the banking sector must be reined in, which the rankand-file supporters of both major parties also support; however, to date Labor hasn’t capitalised on this popular rebellion against neoliberalism, because it won’t give up the ideology. While there are fine individual Labor MPs, the party is still locked into its dalliance with the Money Power (epitomised by a former Labor Premier, Anna Bligh, being the head of the bankers’ lobby, the Australian Banking Association).

This makes Labor weak and impotent in the face of clearcut issues. The 9 November Australian Financial Review reported that Liberal Senator Gerard Rennick, One Nation Senator Malcolm Roberts, former Liberal MP and now United Australia Party leader Craig Kelly, and the Greens, all support amending the government’s new Financial Accountability Regime (FAR) legislation to re-insert penalties for financial executives. “The government had considered levying individual fines worth up to $1,050,000 for law-breaking executives in the FAR, but the penalties were later removed from the legislation after intense lobbying from the banks”, AFR reported.

Senator Rennick said: “There needs to be a financial penalty there, absolutely. The fine should have stayed up to $1 million.” Senator Roberts said that “the lack of financial penalties is inexcusable and confirms the government’s complete disregard for financial probity and its willingness to allow the banks to run riot”. Craig Kelly argued the legislation “doesn’t go far enough” and that some executives “should be subject to multimillion-dollar fines”.

What did Labor say? “Labor is still determining its position on the legislation”, AFR reported, adding that the party’s finance spokesman Stephen Jones personally supported putting financial penalties in the bill. Why is it even in question? Why can’t Labor be definitive on such an issue?

The Citizens Party has experienced this side of Labor many times in its campaigns. The party can’t lay a finger on the worst prime minister in living memory because it is still captive to its neoliberal ideology, even though it knows the public demand change. The ALP’s on track for a tombstone that will read: “Labor is still determining its position.” (Except that would require it to decide a position on where to be buried.)

Under public pressure individual ALP politicians can shift, and do a good job, as WA Senator Louise Pratt is doing on Sterling First. But it means that we are the leaders— a responsibility to take seriously.

Banking / Finance
APRA/ASIC/ACCC/AUSTRAC
[ Back to top ]