There is something of a pattern in Australia of public officials taking the hardest line imaginable on issues of defence and national security while in office, only to soften or even reverse their positions after they retire. In 2009, for example, then-Prime Minister Kevin Rudd exhorted the US officials to prepare for war with a supposedly hostile and expansionist China, according to diplomatic cables published by WikiLeaks; but he admitted in a 2015 interview with American TV host Charlie Rose that he had been unduly pessimistic, and that China was not a threat. The latest, and in some ways even more remarkable aboutface comes from former Australian Security Intelligence Organisation (ASIO) chief Duncan Lewis, who led the agency’s campaign to terrorise Australians into giving up ever more civil liberties in the name of guarding against the nebulous threat of alleged Chinese “foreign interference”. Yet early this month, Lewis warned that that threat has been greatly exaggerated, and called instead for more resources to be directed towards diplomacy. Lewis’s motivation is unclear but his intervention is timely, as the government pushes to legislate yet another tranche of surveillance powers and invasive background checks that will strip millions of ordinary working Australians of their last vestiges of privacy, on the pretext of protecting a ridiculously broadly defined suite of “critical infrastructure” from infiltration by foreign agents and would-be terrorists.

Lewis is among Australia’s most senior military and intelligence figures. After a 33-year career in the Australian Army, during which he led the Special Air Service Regiment (SAS) in 1990-91 and commanded Australian special forces in Iraq and Afghanistan as head of the Special Operations Command in 2001-04, Lewis retired with the rank of Major General in 2005. He then joined the Australian Public Service, where his roles included inaugural National Security Advisor in 2008-11, Secretary of Defence in 2011-12, ambassador to the European Union and NATO in 2012-14, and finally head of ASIO (formally Director-General of Security, DGS) in 2014-19. Whereas his predecessors had mostly shunned the limelight, Lewis made the role of DGS an increasingly public one, appearing at public forums, business events and in the media to sound the alarm over supposed foreign interference in Australian politics and public life, and to lobby for the powers to combat it. At the same time, as the Australian Alert Service has documented,1 since at least 2016 ASIO used its assets in the media, academia and the federal parliament to wage a McCarthyite scare campaign against China. Its aim was and is to convince the Australian public to support what senior Australian investigative journalist Max Suich, in a series of essays published 17-19 May in the Australian Financial Review,2 revealed had been a deliberate decision by Canberra to antagonise and alienate Beijing.

On 7 July Lewis was appointed a professor at the Australian National University’s National Security College. Interviewed for the occasion by the AFR, Lewis said he was proud to have helped get the foreign interference laws put in place, but warned that things were starting to get out of hand. “What concerns me most”, he said, “is that after the success that we have had in bringing foreign interference into the community’s consciousness, I fear we can get into a situation of exaggeration. It strikes me as strange that the public has an endless fascination with espionage and spying from movies and television, as well as from journalists, which can lead to an exaggerated depiction of where we are at. … [We] need to be careful we are not allowing exaggeration or shrillness to enter the dialogue.” And in remarks to ABC News the same day, Lewis added: “There has been an over-egging of some of the claims [of foreign interference]. … My concern is that we don’t get this thing out of perspective and we don’t start hurling accusations from one country to another which are going to increase the heat when in fact what we need to do at this time is decrease the heat.” (Emphasis added.)

This is, of course, correct—but what a contrast to the Duncan Lewis of 2019! In September of that year, shortly before he retired as DGS, Lewis told a gathering at Sydney-based international affairs think tank the Lowy Institute not only that foreign interference was “far and away the most serious issue” Australia’s security agencies had to deal with, but that it could constitute an “existential threat to the state”. As for “not hurling accusations from one country to another”, in his first post-retirement interview in November 2019 Lewis told Sydney Morning Herald Foreign Editor Peter Hartcher (a frequent recipient of ASIO’s leaked “scoops” during Lewis’s time as DGS) that the threat he had referred to came “overwhelmingly” from China. Wrote Hartcher: “As well as targeting politicians, Chinese authorities were working to win influence in social, business and media circles, he [Lewis] said. ‘Espionage and foreign interference is insidious. Its effects might not present for decades and by that time it’s too late. You wake up one day and find decisions made in our country that are not in the interests of our country. … Not only in politics but also in the community or in business. It takes over, basically, pulling the strings from offshore.’” (Emphasis added.) Is that not a little “over-egged”, Professor? 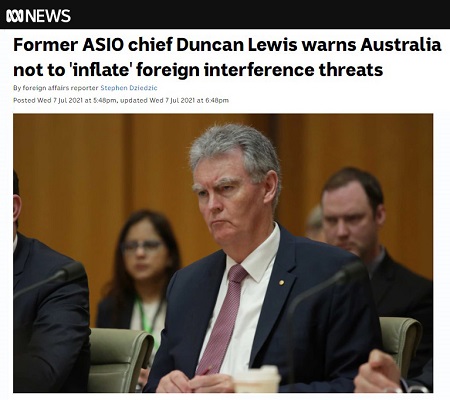 Usefully, the newly circumspect Lewis also urged Canberra to place more emphasis on constructive forms of international outreach, starting with restoring appropriate resources to Australia’s atrophied diplomatic corps. According to the ABC report cited above, Lewis “said Australia’s diplomatic resources were ‘very much on the light side’ when compared to those of similarly sized countries. ‘Our diplomatic service in my view is too small, and it needs to be expanded so we have more representation in more places with greater capacity than what we’ve had in the past’, he said. He also said that boosting the Department of Foreign Affairs and Trade would allow Australia to make better decisions about where it should focus foreign aid in an increasingly contested environment.” Whilst unfortunately this argument is still framed around a supposed competition with China for geopolitical influence, a return to traditional modes of diplomacy in place of the Morrison government’s ham-fisted public haranguing of our larger neighbours, and bullying of the smaller ones, in an attempt to have them toe its anti-China line, would surely be much welcomed throughout the AsiaPacific and beyond.

Whether Lewis has changed his views or is simply creating a more moderate persona befitting his new job, the “foreign interference” juggernaut he set loose rolls on. The Morrison government latest effort to undermine Australians’ freedoms on the pretext of protecting them is the Security Legislation Amendment (Critical Infrastructure) Bill 2020, ostensibly designed to protect both public and private “essential” services from sabotage and cyber-attack. The Bill was foreshadowed in a Department of Home Affairs discussion paper, titled Protecting Critical Infrastructure and Systems of National Significance, published 6 August 2020. As the Australian Alert Service reported at the time,3 the current definition of “critical infrastructure” under the Security of Critical Infrastructure Act 2018 includes such things as electricity, gas, water, mass transport, communications and payments systems. The Home Affairs paper proposed that this be expanded to encompass the whole banking and finance sector, universities, the food and grocery industries, and more. According to a report the same day in the SMH, the owners and operators of all of the above would be “forced to pass on information … to the Australian Signals Directorate [ASD, the nation’s electronic spying agency] in real time, and potentially allow the cyber spy agency into their networks to fend off major hacks.” And with the approval of Minister for Home Affairs, the article continued, “the ASD could also be given access to the network to monitor and defend against significant cyberattacks.” In other words, the ASD would be able to intrude into virtually every aspect of Australians’ lives, right down to your grocery shopping, solely on the say-so of one Member of Parliament, in the event of a cyberattack that could just as well have been launched by the ASD itself or by some provocateur employed for the purpose.

The Bill itself was introduced in the House of Representatives by then-Minister for Home Affairs Peter Dutton MP on 10 December 2020, and has been on the back burner ever since. It has recently reappeared in the headlines, however, after it emerged during a Senate hearing earlier this month that in addition to the already absurd overreach described above, the Bill as written would also oblige employers in any “critical” industry to perform background checks on current and prospective employees, of a type normally reserved for high-level security clearances.

Online news service NCA NewsWire (owned by but ostensibly run independently of News Corp) reported 10 July that according to a presentation by Queensland stateowned electricity transmission company Powerlink, under the new law the company would conduct “digital footprint checks” which appear designed to add its own unwarranted intrusion into employees’ private lives in addition to complying with its new reporting obligations. “Listed in the presentation”, NewsWire reported, “was the presence of news articles or media profiles featured in an employee’s internet search history that may bring ‘reputational harm’ to Powerlink. The company … also told union delegates it would search for ‘indications of poor reliability or trustworthiness, such as flagrant dishonesty’ and if the person’s internet activity reveals signs they may ‘easily succumb to groupthink or other conformity pressures’.” Electrical Trades Union (ETU) national policy officer Trevor Gauld, who testified at the Senate hearing, told NewsWire that one example Powerlink had given “was if an employee shared a political meme about legalised marijuana that might be their political view and that somehow that would be a breach. It would be a chilling effect on people’s freedom of political expression and freedom of speech.”

The explanatory memorandum for the Bill notes that “The Australian Government’s Critical Infrastructure Resilience Strategy currently defines critical infrastructure as: ‘those physical facilities, supply chains, information technologies and communication networks, which if destroyed, degraded or rendered unavailable for an extended period, would significantly impact the social or economic wellbeing of the nation, or affect Australia’s ability to conduct national defence and ensure national security.’” These are listed as communications; financial services and markets; data storage and processing; defence industry; higher education and research; energy; food and grocery; health care and medical; space technology; transport; and water and sewerage. Gauld noted that just transport, healthcare and food retailing account for some two million workers who will be “placed under a similar microscope to those at risk of international espionage”, NewsWire reported. “That’s how broad the bill is. An apprentice electrician now somehow poses a terror threat to the power industry; it’s beyond ludicrous.”

A spokesperson for Home Affairs Minister Karen Andrews said that the proposed rules would only apply to a “relatively small number of employees”, and are intended to assess “information relating to an individual’s identity, criminal history, citizenship status, residency status and/ or entitlement to work in Australia”, NewsWire reported, while Liberal Senator James Paterson, who chaired the hearing, said it “would obviously be absurd if an apprentice electrician was subjected to the same induction and security checks as an ASIO officer.” But were the Bill to pass as written, there would be nothing to stop Andrews and her successors from ordering exactly that, for any and all employees in every category named; and if history is any guide, given a chance to abuse their power, they will.