There is mounting evidence that Australia’s domestic spy agency, the Australian Security Intelligence Organisation (ASIO), is behind the spiralling paranoia over alleged Chinese foreign influence in Australia. A stream of well-timed leaks of classified material, journalistic tip-offs from anonymous ASIO sources, and evidence of blatant coordination between the spy agency, media and government make it abundantly clear: the anti-China disinformation campaign that has destroyed Australia-China relations is a spook-run operation, and the real foreign interference in Australia is coming through ASIO from the US- and UK-dominated Five Eyes spying alliance, which is dragging Australia into a neoconservative Anglo-American strategy to confront China, even at the risk of war.

ASIO is a clandestine organisation and reporting on its operations can land journalists in jail for 10 years; it has shaped public opinion through a small circle of academics, journalists, think tanks and politicians who cite each other’s unproven claims as evidence for their increasingly strident allegations against China. As evidenced in his reporting, Fairfax/ Nine journalist Nick McKenzie is a primary recipient of confidential tip-offs from national security agencies, and is apparently privy to intimate details of ASIO’s activities. McKenzie has peddled the Chinese foreign influence narrative for years, through a series of inflammatory newspaper and television “exposés” and sensationalist reporting, conveniently timed to justify ASIO-empowering legislation, and to deflect unwanted attention from ASIO’s misconduct. 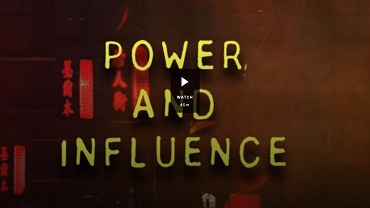 In a 5 June 2017 Four Corners/Fairfax exposé, Power and Influence, McKenzie sensationally insinuated Australian politicians were unduly influenced by the Chinese Communist Party (CCP) through political donations from two prominent Chinese-Australians businessmen, Dr Chau Chak Wing and Huang Xiangmo. Displaying an unusually informed knowledge of ASIO’s clandestine activities, McKenzie reported in an accompanying article for the Sydney Morning Herald that ASIO Chief Duncan Lewis conducted private meetings with senior figures in major political parties in 2015, where Lewis “secretly briefed” politicians on foreign influence; in those briefings Lewis used a document featuring pictures of Chau and Huang as a warning “prop”, according to McKenzie. Curiously, despite waving around their photos, Lewis was “careful to stress that neither Dr Chau nor Huang Xiangmo was accused of any crime and that Mr Lewis wasn’t instructing the parties to stop taking their donations.” (Emphasis added.) Despite this careful disclaimer, which any thinking journalist should have realised meant ASIO had nothing to back up its insinuations, McKenzie’s reporting of Lewis’s stunt achieved its desired effect in the ensuing media uproar and foreign influence hysteria.

Power and Influence demonstrated the convenient timing of McKenzie’s revelations. Just ten days earlier, Lewis had testified before a Senate Estimates hearing that espionage and foreign interference were occurring on an “unprecedented” scale, but he did not name any specific countries. Power and Influence allowed the media to put two and two together— China must be Lewis’s unnamed foreign influence threat. Chau later sued McKenzie and Fairfax for defamation, and the subsequent 2018 federal court ruling revealed the speculative and unsubstantiated nature of McKenzie’s reporting.

The official justification for the foreign interference laws came from a still-classified report by ASIO and Turnbull’s advisor John Garnaut, a former Fairfax colleague of McKenzie’s who went from being a foreign correspondent in China to an ostensible espionage expert in the prime minister’s office. Garnaut had similarly maligned Chau in an October 2015 Sydney Morning Herald article that alleged Chau was guilty of conspiring to bribe a UN official. Chau successfully sued Garnaut and Fairfax for defamation. A February 2019 federal court ruling was damning of Garnaut’s credibility and character. The judge declared: he had “serious doubts about the honesty and reliability” of aspects of Garnaut’s evidence, and his credibility as a witness; Garnaut “appeared to approach the task of publishing a ‘big hit’ on Dr Chau with some considerable enthusiasm, if not glee”; Garnaut “was at times prone to exaggeration and hyperbole … [and] showed signs of arrogance, if not smugness, concerning the article”; and Garnaut’s evidence about Chau “was far from impressive”, with some conclusions appearing to be “highly speculative and exaggerated”, given “the relatively limited amount of actual research he had conducted”.

The scathing assessment of Garnaut’s credibility raises serious questions over the Garnaut-ASIO report; yet regardless of the court ruling’s poor reflection on Garnaut’s character, on 2 March 2020 the Herald Sun reported Attorney-General Christian Porter had hired Garnaut to “prepare evidentiary briefs against people suspected of being undeclared agents of influence”, as part of Porter’s overhaul of the Foreign Influence Transparency Scheme. (“China narrative part one”, AAS, 12 Aug. 2020)

On 22 May 2018 Liberal MP Andrew Hastie, another of the small anti-China circle around ASIO, used the defamation protections of parliamentary privilege to repeat Garnaut’s now publicly discredited accusations against Chau. The chair of the Parliamentary Joint Committee on Intelligence and Security (PJCIS), Hastie announced he was privy to confidential information from US intelligence agencies which confirmed Garnaut’s allegations. Hastie declared the matter posed a “threat to our democratic tradition”, warning of the “threat of foreign interference in our political institutions”.

On 24 May 2018, the ABC reported that the “avowedly anti-Communist” Hastie made the defamatory allegations because he was an “ultra-patriot”. The ABC revealed Hastie to have had a long involvement with intelligence agencies, describing him as a “non-declared member of the unofficial dark state, a former member of the Special Air Service Regiment who has been embedded in the intelligence community for more than a decade. For a number of years he was a member of SAS’s 4 Squadron, a clandestine intelligence unit within the most elite of Army squadrons that blurred the line between military and intelligence.”

During a Senate Estimates hearing that same day, ASIO Chief Duncan Lewis, who had served with Hastie in the SAS, revealed Hastie had informed him of the prospective speech against Chau 90 minutes before it happened. Lewis made clear that whilst Hastie was not seeking authorisation or clearance, ASIO made no attempt to intervene or alert the government. Hastie’s speech caused diplomatic shockwaves and a media frenzy, requiring Prime Minister Malcolm Turnbull to seek ASIO’s advice on possible repercussions. Revealingly, Hastie had given a “heads up” to ASIO, but not his own prime minister.

Writing in Pearls and Irritations on 27 July 2018, former Australian diplomat and public service chief John Menadue said the situation indicated Lewis had been acting behind the scenes, with Hastie apparently reporting to the ASIO boss. “I cannot see how either Hastie or Lewis can remain in their positions as head of the Parliamentary Joint Committee on Intelligence and Security, and ASIO”, Menadue wrote.

Hastie starred in McKenzie’s production, using the weight of his standing as chair of the PJCIS to announce two alleged Chinese “spies”. One “self-proclaimed” spy, Wang Liqiang, was later publicly discredited by ASIO (albeit ASIO waited long enough to allow rampant espionage hysteria throughout the media). (“China narrative part three”, AAS, 9 Sept. 2020) Hastie’s second “spy”, Nick Zhao, had allegedly been groomed to infiltrate the Australian parliament as a Chinese Communist Party agent though the Liberal Party, before his untimely death in March 2019; however that story also fell apart.

In the wake of McKenzie’s 60 Minutes exposé, despite the dubious credibility of these alleged “spies”, ASIO Director Mike Burgess made the unusual step of releasing a formal statement confirming ASIO was “actively investigating” the 60 Minutes report, stating that “[h]ostile foreign intelligence activity continues to pose a real threat to our nation and its security.” The Australian on 27 November 2019 noted that “There [was] no overstating the impact” of Burgess’s statement and the 60 Minutes exposé “across federal parliament, into the bureaucracy and on the intelligence community. … Burgess also guaranteed the stories could not be ignored…. It meant Morrison was not the one out there accusing China of nefarious activities. Burgess was enabling everyone from Morrison down to tuck in behind him, taking refuge in his statement….”

Nick McKenzie’s sensational “exposés” also appear timed to deflect unwanted attention from ASIO. The 2019 Christchurch shooting by an Australian right-wing extremist raised uncomfortable questions about ASIO and the rest of the Five Eyes apparatus: given all their unprecedented surveillance powers, how could they miss the terrorist’s obvious trail of online breadcrumbs? 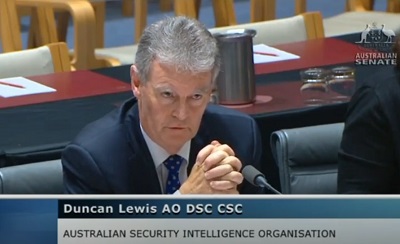 A 22 June 2020 episode of ABC’s Q&A, titled “Australia: Secret State?”, exposed revelations of ASIO’s prior misconduct: secret trials, secret prisoners, “overreach” by intelligence agencies and raids on an Australian journalist who revealed plans to increase domestic spying on Australians. The ensuing media coverage was damning, with Australia likened to North Korea. Four days later, all was forgotten in the wake of a well-publicised raid conducted by ASIO and 40 Australian Federal Police officers on the home of NSW Labor MP Shaoquett Moselmane. The raid was conveniently captured by a camera crew fronted by McKenzie, and sensationally reported in the 26 June Sydney Morning Herald. (We now know that on the same day, ASIO raided the homes of four Chinese journalists, which ASIO was able to ensure the Australian media didn’t report, p. 6.)

Spy chief Duncan Lewis claimed in Senate Estimates on 18 February 2019 that he had “the greatest confidence” that ASIO officers “do not leak information to third parties”. If true, how is it that McKenzie’s camera crew managed to travel from Melbourne to Sydney in time to catch the beginning of an Attorney General-approved AFP dawn raid, under direction of ASIO, whose investigation alleged that Chinese government agents had infiltrated Moselmane’s office? Rather, the hyped raid is evidence of close cooperation between law enforcement, government and media, apparently under ASIO’s guidance. Writing for the 7 August 2020 Pearls & Irritations, Moselmane personally revealed that a month later, no federal officer had yet questioned him in regards to foreign interference, or even suggested he was a suspect—a strong indication the raid was for show to reinforce the foreign interference narrative in the minds of the public.

ASIO, as an arm of the Five Eyes intelligence apparatus, appears to be imitating the CIA’s infamous Operation Mockingbird, a program recruiting journalists as public-influence assets since the 1950s, which was exposed by the US Senate’s 1975-76 Church Committee. ASIO’s intensive anti-China PR campaign, accomplished through coordination with biased and possibly compromised reporters, is intended to herd the Australian public and politicians towards a Five Eyes-determined foreign policy.