The Australian Strategic Policy Institute (ASPI) published its dramatic allegations of Uyghur Muslim forced labour in a much-lauded 1 March 2020 report, Uyghurs for Sale. The report alleged “a new phase in China’s social re-engineering campaign targeting minority citizens”, claiming it had exposed “new evidence” that a number of factories were “using forced Uyghur labour under a state-sponsored labour transfer scheme that is tainting the global supply chain”. A 26 March 2020 Grayzone report nailed the agenda behind ASPI’s claims in its headline that charged forced labour allegations about Chinese Uyghurs are “brought to you by US, NATO, arms industry to drive Cold War PR blitz”.

Uyghurs for Sale lead author, ASPI researcher Vicky Xu, told the ABC on 2 March: “Officials and private brokers receive money for every Uyghur person they manage to transfer. The recipient companies receive a cash inducement for every Uyghur they take. … Everyone involved in this transfer scheme benefits except for Uyghur workers.”

Xu’s claims are repeated in ASPI’s report, which essentially alleges a bounty program to incentivise industrialscale forced labour. However, ASPI’s supporting reference doesn’t back up the allegations. In fact, it reveals the subsidy is paid primarily to cover expenses incurred by labour hire companies and job placement agencies, while Xu’s “cash inducement” is part of a regulated labour hire program, incentivised to significantly increase the workers’ income and achieve successful long-term employment.

This is a pattern. Tracing back ASPI’s references reveals that relevant information is ignored, and sources are interpreted in extreme bad faith, or are misrepresented in a manner so misleading it can only be described as academic fraud. References for some of ASPI’s most egregious allegations against the Chinese government come from dubious sources: the discredited far-right evangelical Adrian Zenz, a frequent ASPI source, who believes he is “led by God” on a “mission” against China; the Centre for Strategic and International Studies, an ASPI-like militaristic institution which is funded by the US and UK governments and arms manufacturers; or, conveniently, ASPI’s own staff, who are paid by Mike Pompeo’s US State Department to demonise China.

ASPI claims that “[in] the name of combating ‘religious extremism’, Chinese authorities have been actively remoulding the Muslim population in the image of China’s Han ethnic majority”. The article referenced includes key information that ASPI completely ignores: no terrorist incidents have occurred in Xinjiang in three years due to the counter-terrorism and deradicalisation efforts (after 800 deaths from dozens of terrorist attacks in the ten years to 2017); and foreign officials, diplomats, journalists and religious officials have visited and commended the program, saying it met the United Nations’ purposes and principles on defeating terrorism and protecting basic human rights.

Contradicting ASPI’s claims that the Xinjiang Muslim population is being “actively [remoulded]”, the article describes education subsidies for poor families; universal free health check-ups; improved government social security systems including medical insurance and pension schemes; and subsidised housing built for 212,700 rural families in that year alone. The article also reports Xinjiang’s GDP was up 6.1 per cent year on year, and was the highest in its history; since 2014, more than 2.38 million Xinjiang residents have been lifted out of poverty.

According to ASPI, “Uyghur workers who have been able to leave China and speak out describe the constant fear of being sent back to a detention camp in Xinjiang or even a traditional prison while working at the factories”. ASPI claims that all workers of a Uyghur labour transfer program in Fujian were former “re-education camp” detainees and were “threatened with further detention if they disobeyed the government’s work assignments”; and that “police regularly search their dormitories and check their phones for any religious content. If a Quran is found, the owner will be sent back to the ‘re-education camp’ for 3-5 years”. 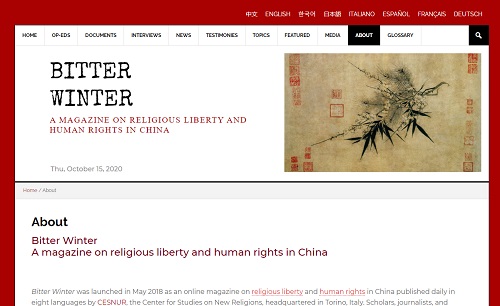 The source for these claims is an article published in Bitter Winter, an online publication of CESNUR, a high-profile lobbying group for controversial religions, which has defended groups including the Church of Scientology, Falun Gong, the Order of the Solar Temple (which was responsible for the mass murder-suicide of 75 members in 1994-97), and Aum Shinrikyo (responsible for the 1995 Tokyo sarin gas attack). Bitter Winter has defended Eastern Lightning (a.k.a. Church of Almighty God), an apocalyptic group regarded as a cult in China, which believes the Chinese Communist Party is Satan incarnate. Eastern Lightning members have been convicted of multiple counts of cult-motivated murder, and once kidnapped 34 members of a Christian group, holding them for two months in attempted forced conversion. Bitter Winter has published reams of articles alleging the Chinese government’s persecution of Uyghurs. On 24 June 2019 Bitter Winter co-hosted a conference campaigning for asylum rights of the Uyghur diaspora and Eastern Lightning, where representatives testified to the alleged torture and murder of their members by the Chinese government.

ASPI says, “Uyghur workers are often transported across China in special segregated trains, and in most cases are returned home by the same method after their contracts end a year or more later”; according to ASPI, this is isolation and a “relevant indicator” of forced labour. Yet ASPI’s referenced articles describe a poverty-alleviation program, where successful job applicants were travelling by train to a pre-job training course, with board, lodging and transportation expenses paid for. The apparent reference for ASPI’s “segregated trains” allegation is an article describing how, to accommodate peak travel periods, a railway company organised special additional trains for “returning workers to their hometowns” which had “also been upgraded from normal speed trains to fast trains, and they are replaced by green leather[-upholstered] cars. It is an air-conditioned car. Migrant workers can go home faster and have a more comfortable travel experience.”

Determined to present an impression of misery, ASPI says that “[in] factories far away from home” Uyghur workers “typically live in segregated dormitories”. This claim is cherry-picked from an article which describes a poverty alleviation program. In one example, in a program aimed at “employment for one person and poverty alleviation for the whole family”, there is a description of migrant employees’ study rooms, halal canteens and air-conditioned dormitories. ASPI ignores the reference’s description of governmentfunded health programs—a new local hospital and comprehensive screening for 40,000 children, which found a prevalence of congenital hand and foot disabilities, in response to which the government funded free surgery and rehabilitation for these children.

ASPI’s second reference documents a migrant vocational program where 1,300 graduates were accepted into new jobs at a company which manufactures high-tech hardware and semiconductors. Interviewees spoke of overcoming homesickness, adapting to their new environment and learning new skills. There are photos of birthday parties, social activities, company-organised excursions, and a new company-built canteen for Xinjiang migrant workers, where Xinjiang chefs were invited to cook. There is a photo of young female employees in their colourfully decorated dormitory, apparently ASPI’s evidence of “segregated dormitories”. (Does ASPI expect men and women, especially Muslims, to share dorm rooms?)

ASPI says that in these factories, migrant workers “undergo organised Mandarin and ideological training outside working hours”. Again ASPI misrepresents its references, which document poverty alleviation programs and the growing prosperity of local residents; applaud the achievements of factory workers-turned female entrepreneurs; profile mentorship programs; and describe a company which hired full-time language teachers to overcome communication barriers and hold language courses for their employees, which grew to be the largest national language training class in southern Xinjiang.

ASPI claims its research is “rigorously peer reviewed—internally and externally”. Uyghurs for Sale was peer-reviewed by unnamed “labour specialists”, “anonymous reviewers”, and Darren Byler, a postdoctoral researcher at the Centre for Asian Studies at the University of Colorado, who is a member of the Washington DC-based Uighur Scholars Working Group, alongside Adrian Zenz and ASPI Senior Fellow James Leibold, a co-author of the report.

The UK Foreign and Commonwealth Office funded ASPI with £10,000 for Uyghurs for Sale. The report featured as supporting material, along with reports from Adrian Zenz, a highly publicised petition which was debated in the UK Parliament on 12 October 2020. On 9 September 2020, UK MPs debated “Detention of Uyghur Muslims in Xinjiang”, overwhelmingly demanding stronger action against the Chinese government and for sanctions to be levelled against Chinese individuals and companies in retaliation for alleged human rights abuses and forced labour of Uyghurs.

Why the relentless push to justify sanctions specifically in the Xinjiang region? As a critical hub of the Chinese government’s “One Belt, One Road Initiative”, destroying Xinjiang’s industry and trade with sanctions furthers the Anglo-American agenda of economically damaging its strategic competitors: China and Russia. The misleading nature of Uyghurs for Sale, and ASPI’s own funding by benefactors that profit from forced prison labour in the USA and UK, reveals ASPI’s faux concern for human rights and its role as a government-funded propaganda outlet—forced labour hypocrites publishing academic fraud.