14 Jan. 2022—In an eight-page strategic package, the Australian Alert Service of 12 January 2022 presents the latest events and essential background on the showdown between NATO and Russia that sharply escalated at the end of 2021.

AAS articles from 2018-2022, showing why NATO’s eastward expansion and activities led Russian officials to assess that the national security “red line” President Vladimir Putin talks about has been reached.

The 22 September 2021 Australian Alert Service warns that the world is hurtling towards World War III, and Australia under Prime Minister Scott Morrison’s direction is hastening that disaster. The AUKUS military cooperation agreement between Australia, the UK and the USA locks Australia into the ambitions of “war-hawk” neoconservatives and liberal interventionists in all three countries, intent on surrounding China with a string of military alliances in the Pacific region.
The AAS features four articles, including a unique analysis contributed by a long-time China hand, Australia’s former Deputy Ambassador to China John Lander. They are:

Clive Hamilton’s books exposing China “interference”, Silent Invasion and Hidden Hand, are important, not because of the quality of the content—paranoid propaganda—but because the influencers behind Hamilton’s crusade reveal his role as a cog in a vast narrative-management machine. The public, as well as MPs and other government officials, are being directed how to think about China by a small group of ideologically driven propagandists, funded by institutions of the section of the Anglo-American power establishment that seeks war without end, even risking nuclear warfare that would annihilate mankind.

Download the full series in one PDF.
Read the html version. 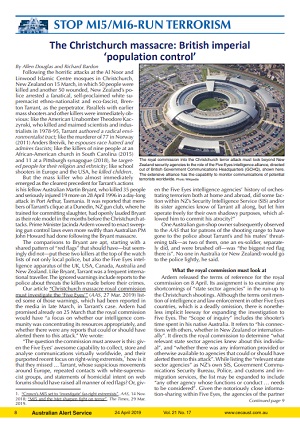 Following the horrific attacks at the Al Noor and Linwood Islamic Centre mosques in Christchurch, New Zealand on 15 March, in which 50 people were killed and another 50 wounded, New Zealand’s police arrested a fanatical, self-proclaimed white supremacist ethno-nationalist and eco-fascist, Brenton Tarrant, as the perpetrator. Parallels with earlier mass shooters and other killers were immediately obvious: like the American Unabomber Theodore Kaczynski, who killed and maimed scientists and industrialists in 1978-95, Tarrant authored a radical environmentalist tract; like the murderer of 77 in Norway (2011) Anders Breivik, he espouses race hatred and admires fascists; like the killers of nine people at an African-American church in South Carolina (2015) and 11 at a Pittsburgh synagogue (2018), he targeted people for their religion and ethnicity; like school shooters in Europe and the USA, he killed children. ...

What is the ‘Third Force’ fuelling US unrest? 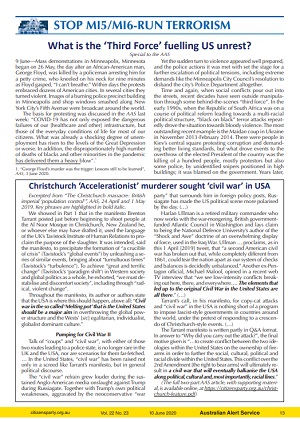 9 June—Mass demonstrations in Minneapolis, Minnesota began on 26 May, the day after an African-American man, George Floyd, was killed by a policeman arresting him for a petty crime, who kneeled on his neck for nine minutes as Floyd gasped, “I can’t breathe.” Within days the protests embraced dozens of American cities. In several cities they turned violent. Images of a burning police precinct building in Minneapolis and shop windows smashed along New York City’s Fifth Avenue were broadcast around the world. The basis for protesting was discussed in the AAS last week: “COVID-19 has not only exposed the dangerous failures of our [healthcare and other] infrastructure, but those of the everyday conditions of life for most of our citizens. What was already a shocking degree of unemployment has risen to the levels of the Great Depression or worse. In addition, the disproportionately high number of deaths of blacks and other minorities in the pandemic has delivered them a heavy blow”. ... 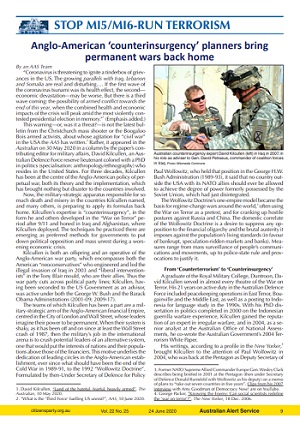 “Coronavirus is threatening to ignite a tinderbox of grievances in the US. The growing parallels with Iraq, Lebanon and Somalia are real and disturbing…. If the first wave of the coronavirus tsunami was its health effect, the second— economic devastation—may be worse. But there is a third wave coming: the possibility of armed conflict towards the end of this year, when the combined health and economic impacts of the crisis will peak amid the most violently contested presidential election in memory.” (Emphasis added.)

This warning—or, was it a threat?—is not the latest bulletin from the Christchurch mass shooter or the Boogaloo Bois armed activists, about whose agitation for “civil war” in the USA the AAS has written. Rather, it appeared in the Australian on 30 May 2020 in a column by the paper’s contributing editor for military affairs, David Kilcullen, an Australian Defence Force reserve lieutenant colonel with a PhD in politics (specialisation: anthropology/ethnography) who resides in the United States. For three decades, Kilcullen has been at the centre of the Anglo-American policy of perpetual war, both its theory and the implementation, which has brought nothing but disaster to the countries involved. ... 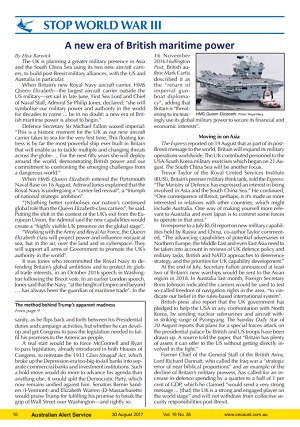 A dossier of AAS articles: